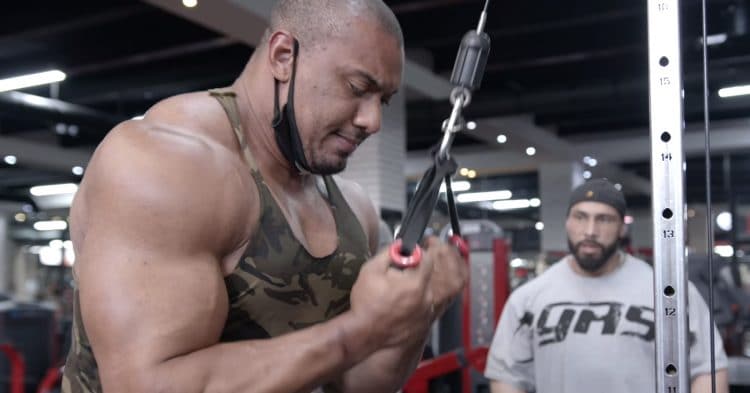 Just a few days ago, the personal record king himself, achieved yet another pr in training where he squashed a massive 838lb/380kg dead stop deadlift triple, followed by a long overdue belt throw. He then followed this up with a video of his doing some arm wrestling training in Dubai as he has really taken an interest in the sport.

So, he made it clear that he wanted to challenge Internet fitness sensation Jujimufu and a top, young arm wrestler known as Schoolboy.

There’s no doubt that fans would love to see these matchups but they’ll most likely happen after the health situation begins to simmer down.

Until then, we get to see Larry Wheels do his thing which includes lifting massive poundages, setting new prs, and just providing great content.

So, he just uploaded a new video where he showed “what it takes for bigger arms”. This session was part of a new program where he trains arms and calves twice a week. Well, he’s three weeks in and definitely seeing amazing results so far.

He even joked that his calves are bigger than ever which is something he has always been criticized for from viewers. But he had some incredibly impressive partners (Andrew Jacked, IFBB Pro Samir Troudi, and Jantee Shaaban) who he has apparently been training with. Wheels explained that he never trained bodybuilding properly nor did he push himself hard enough until now.

He mentioned that he has been working with ‘Jantee’ and ‘Samir’ who have helped him make improvements with his physique.

The workout consisted of four triceps supersets and two biceps supersets. So, each time they hit either biceps or triceps, they’d do two exercises for that muscle in a superset fashion. When they completed one superset for one muscle, they moved onto the next muscle and alternated between triceps and biceps for the session.

They did a warmup with the first exercise of each superset before doing the working sets. The exact sets and reps weren’t provided but the reps varied based on the exercises although, usually taken to failure and beyond.

To start off the workout, they did some warmup sets for triceps with a reverse-grip cable pushdown variation. They then increased the weight for a few working sets of the same exercise. Troudi showed Wheels’ the proper way to do this movement and talked about why he likes this variation.

“The reason why I do reverse is because I swear that it hits the long head better and I can actually see it working more then if you were doing a normal press.”

So Wheels’ did his set and then Andrew Jacked was next up (the insanely massive guy in camo).

They finished up and moved onto some bicep training.

For biceps, they started with a warmup set and then did a superset of two exercises which were a seated straight bar cable curl done with pause reps and dumbbell bicep curls performed in the same fashion. The emphasis was placed on really squeezing the biceps at the top for a better contraction.

Then it was back to triceps which involved a warmup set and another superset. The two exercises were the reverse-grip lying tricep extension using a fixed barbell and the same exercise but using a 45lb plate. They performed these exercises to absolute failure and even with some help to get through the reps.

The last movement for biceps was preacher curls of which they continued to bang out reps to failure and beyond.

The last part of the arm session was a triceps superset that consisted of a curved bar overhand-grip cable pushdown and a bent-over cable rope extension.

They finished off the workout with some seated calf raises using drop sets (stripping the weights during the set) to achieve more reps until they couldn’t do any more reps.

To end, Larry Wheels explained that they’ll be continuing the twice per week arm and calf training indefinitely. He also mentioned that he’ll be attempting a 425kg/936lb raw deadlift on July 14th.

Check out the entire training session below…