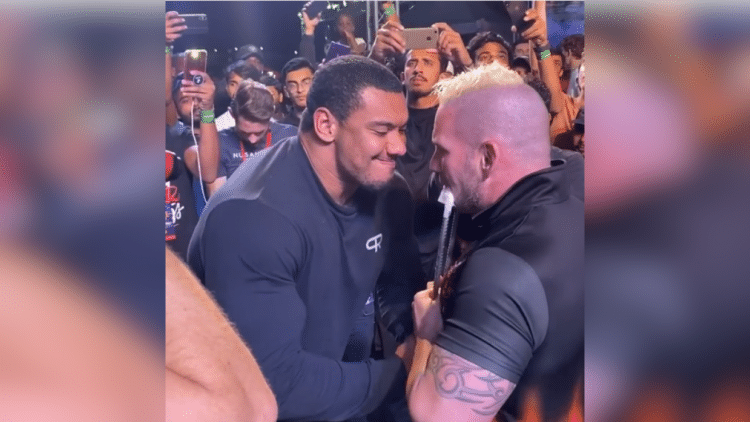 It is no secret that Larry Wheels is a strong guy. However, this strength was put to the test, as he bends a metal bar while it is held in the mouth of Zsolt Sinka.

Wheels is a freak of nature, when it comes to athletic ability. He has dabbled in all kinds of strength sports, including bodybuilding, strongman, and even arm wrestling. However, his main focus is on powerlifting, where he has had the most success. He has worked hard to set himself apart from his contemporaries, by demonstrating unbelievable levels of strength and physicality.

Wheels demonstrated his power in a big way recently, with the help of Zsolt Sinka. Sinka, also known as Popeye Strong, is a Guiness Book of World Records holder, who is known for his impossibly strong teeth. He was even able to pull a plane using just his jaw once!

As a result, when you take the muscles of Larry Wheels,, and combine it with the chompers of Zsolt Sinka, you are in for a spectacle. That is exactly what they delivered too, as evident with a post to Larry’s Instagram. In the video, you can see the phenom bending a metal bar, while it is held in the Sinka’s mouth. It is nearly impossible to believe what you see in this footage.

Wow, that is simply one of the craziest things you will ever see. The amount of jaw strength it takes to hold that bar, while Wheels bends it in half, is unreal. It makes you want to watch it over and over on a loop, just because you can hardly believe what you are seeing.

Larry Wheels never ceases to impress, and this feat of strength with Zsolt Sinka is no exception. Honestly, it is hard to decide which is more impressive, the strength of Larry, or the teeth of Sinka.