Bodybuilder Lee Priest has been accepted into the Hall of Fame at Muscle Beach in Venice, California, 'If a guy from Australia can do something, anyone can.' 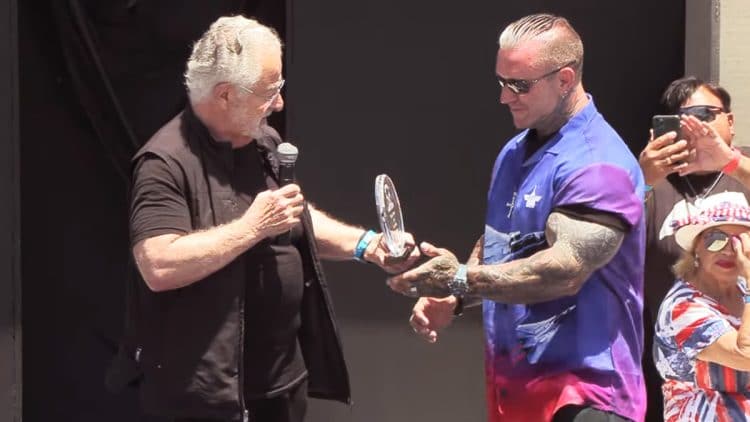 Australia’s Lee Priest was the latest bodybuilder to be accepted into the Hall of Fame at the iconic outside weight training room in Venice Beach, California on May 30, 2022. Priest, who made it to the Olympia a number of times, took the honors on Monday at the distinguished ceremony.

Known for his activity level, Priest made a name for himself in the IFBB Pro League with his outspoken nature, incredible arms, and commitment to being the very best in the world. While he wasn’t able to win a coveted Sandow trophy at Mr. Olympia, he managed to carve out a very successful career during his tenure, which mostly took place between the 1980s to early 2000s. In a sport as fiercely competitive as bodybuilding, Priest did what few before him could — leave the sport on top.

Priest earned arguably the most impactful victory of his career after nailing down the 2006 Iron Man Pro title. That same year, Priest would return to the 2006 NOC New York event and once again claim gold. Before sailing off into retirement, Priest won his final bodybuilding show at the 2013 NABBA Mr. Universe competition.

In a video published on YouTube, Lee Priest reacts graciously to the honorable distinction, before offering words of encouragement for any aspiring people eager to go after their dreams. He was inducted by Iron Man Magazine owner, John Balik.

“Thank you. I just want to thank everyone for coming out and supporting this event. Priest added. Because I’ve competed for a long time.”

“I really don’t think I deserve this because there’s so many great people out there in the industry. Bodybuilders and people like John that have helped the fitness industry but thank you very much.”

After accepting, Priest dedicated his achievement to the late Eddie Guiliani, who passed away at 87 in May. Guiliani led an extensive career as a bodybuilder, competing in more than 35 contests. In 2012, he was inducted into the Muscle Beach Hall of Fame by actor Al Pacino.

“I really do want to dedicate this award to my good friend Eddie Guiliani, and I have a brother who passed away, Dr. AJ, who really helped push for this and like I said, I don’t think I’m deserving of it because I was just a young kid who wanted to look like the He-Man cartoon and things fell into place.”

According to the Australian native, he came to America for two weeks, entered a bodybuilding show, and the rest was history. He ended up taking residence in the country for over 20 years.

“Came over here [America] for two weeks, got some contracts and ended up living here for 20 years doing bodybuilding so, trust me I’m no one special. If anyone has a dream and wants to do it, I say go for it because if I can make it happen, like I said a if a young guy ticket from Australia can do something anyone can.

Trust me. I just want to thank everybody for coming out today and supporting this great show. It’s great to see you all here. Thank you.” Lee Priest said.

As of late, Priest decided to take an interest in transforming his physique. He has routinely shared updates, and the 49-year-old looks incredibly built even in retirement. Priest is an open book and is never shy about discussing the current diets and cycles he opts to utilize. It remains to be seen if Priest will return to a bodybuilding show.

Given the tenure Priest has put forth as an IFBB Pro bodybuilder, he’s an ideal candidate to receive this award. After being accepted into the Muscle Beach Hall of Fame, Priest’s biggest takeaway from the ceremony was to inspire others to follow their dreams.

Nick Walker on The Prevalence of PEDs in Bodybuilding: “We’re Playing with Fire”

Big Ramy Speaks with Dan Solomon: ‘I Will Win Number Three, I Will Show the World In December’