Speaking with Dennis James, Australia's Lee Priest explained his 15th place showing at 2003 Olympia and addressed whether or not he is still banned from the IFBB Pro League. 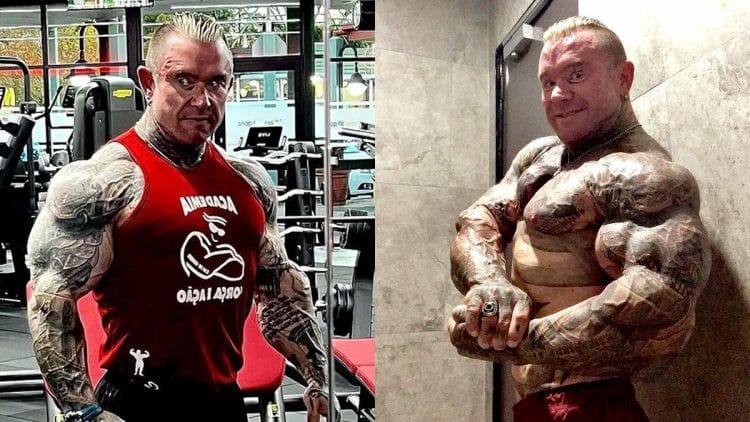 Bodybuilder Lee Priest is known for his outspoken nature in the sport and joined Dennis James on the podcast to discuss a number of topics relating to his career. In a recent interview on YouTube, Priest reflected on his time competing against Flex Wheeler, his poor performance at 2003 Mr. Olympia, and whether or not he is still banned from the IFBB Pro League.

Lee Priest’s bodybuilding tenure from the 1980s to the early 2000s was filled with excitement as he maintained a level of activity that few athletes could replicate. He has competed at several Mr. Olympia shows and has stood against some of the sport’s most recognized legends. Lee left the sport on top, a feat that bodybuilders in the modern era have struggled with.

One of the biggest wins of his career came in 2006 at the Iron Man Pro where Lee secured first place. Before sailing off into the sunset, Priest captured titles at the 2006 NOC New York and the 2013 NABBA Mr. Universe competition.

While Dennis James is enjoying the fruits of his labor in retirement, he remains a prominent voice in the sport. After retiring, he came back to Masters Olympia in 2012, where he ultimately landed in third place, behind Toney Freeman in second, and champion Dexter Jackson. As of late, James has spent time coaching and keeping his finger on the sport’s pulse.

Lee Priest on Standing Against Flex Wheeler at 1997 Iron Man, and Placing 15th at 2003 Mr. Olympia

Priest remembered facing Flex Wheeler at 1997 Iron Man and had a funny story to tell about competing against an all-time legend. In addition, Priest reflected on the processes that led to a 15th place showing at Mr. Olympia in 2003.

“The ’97 Iron Man was funny when I got second to Flex because Shawn was helping Flex backstage. So, Shawn comes over and says ‘you’re looking great Lee, it’s going to be close between you and my boy Flex.’ Flex heard him say it and walks over and goes, ‘yeah I’ll give you credit, you’re looking good, but you’re not going to beat me because of who I am.” Lee Priest told Dennis and the group.

After being asked by Dennis about his Mr. Olympia showing in 2003, Priest explained that fans put enough pressure on him to follow through with the event despite not being in the proper condition or wanting to do the show.

I did it. Went on to the stage and competed. Go on, get big the next day, and then they say ‘how could you go on stage looking like that, you let us down!” Priest explained.

Lee explained that his diet was less than ideal for the contest but committed to the show anyway.

Priest on If He Is Still Banned From the IFBB Pro League: “That Was All Made Up But Technically Yes”

After taking part in a bodybuilding show for Wayne DeMilia, Lee Priest mentioned that he was banned from the IFBB Pro League for one year. After arguing the point, Priest says the IFBB Pro League decided to make an example out of him for competing in other leagues and issued a lifetime ban as a result. However, Lee explained that he’s technically no longer suspended after the organization was restructured.

“Well, Bob Chicarello, the athletes rep, says I’m not, that was all made up. But if we go technically, yes I was but now, of course, the IFBB and them have gone different ways. The new organization I’m technically not suspended from.

The new organization had a split from Raphael, and it became the IFBB.” Priest says.

It’s no secret that Lee Priest could potentially return to a show as he has made a dramatic physique transformation recently. Dennis believes that in order for Priest to be eligible to compete, he needs to make amends with the IFBB Pro League and ensure that he’s in good standing.

“Yeah, the IFBB Pro League. So, now are you in good standing with the Pro league? Because if you want to do the Masters Olympia, you need to be in good standing.” Dennis said.

“I know. See, the thing is, I never had a problem with Jim. My problem was with the rules. When I got suspended the first time, was when I, well probably the fourth time, was when I did the PDI. People said ‘look at Lee, sticking it to the IFBB.’ I said, look, Wayne’s starting a new organization, he’s going to judge it a different way. I’m in shape. It’s two weeks before the Olympia, why can’t I do it?” Lee Priest explained.

Priest maintains that most of his problems arose after competing at a few shows for Wayne DeMilia, like the 2006 PDI Night of Champions event, a competition where Priest dominated en route to first place.

“I had no choice, after Wayne’s show, they suspended me for one year. They said, ‘oh, we see you going to England, don’t go and we will only make it for one year’. I said I have to go, and sell tickets, I’m on the poster. I said just make it a two-year suspension and they said okay. So when I got suspended for the two years, I came back and they’re like, ‘well, Lee that’s two years…’.”

Dealing with the IFBB Pro League officials at the time, Priest printed the league rulebook and started underlining other bodybuilders who potentially violated the ruleset.

“I said, let me get this straight, I’m a bodybuilder, I compete. That’s what I do to make a living. You didn’t have any shows on. I pay to be with you. You don’t pay me to be a member. I started arguing and they said you broke a rule. I said look, I can go through the rule book, printed it out and started being an ass hole and started underlining shit, well this rule is being broken, what did he get? Nothing? He said, ‘oh, you want to argue the point? You’re suspended for life.” Priest told Dennis.

Priest isn’t 100% sure he’s allowed to compete in the IFBB Pro League. Jake Wood gave the green light on 2023 Masters Olympia recently, and Priest is a prime candidate for the anticipated show. After joining a roundtable discussion with Dennis James, Priest cleared the air on competing against Flex Wheeler, 2003 Olympia, and his ongoing issues with the IFBB Pro League.