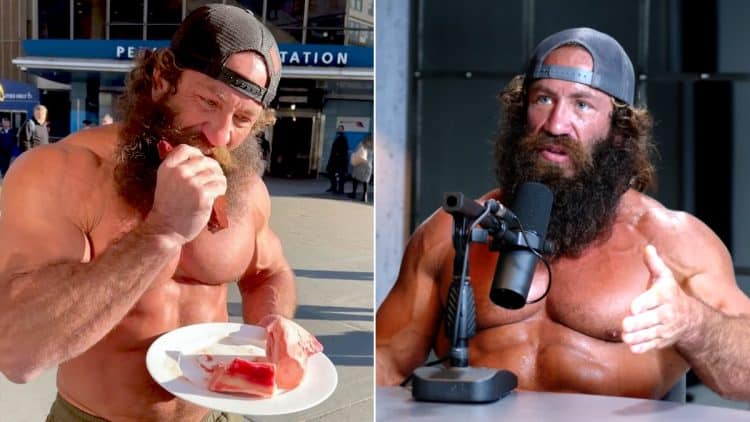 Social media sensation Liver King gained popularity for eating raw meat and organs. He believes in living a natural lifestyle based on how our ancestors were. In a recent video uploaded to The Diary of a CEO’s YouTube account, King shared some practical tips to live the ‘ancestral lifestyle’ based on the nine tenets.

Liver King, formerly known as Bryan Johnson, first gained notoriety for his insanely muscular physique and grueling workouts. He promotes an ancestral way of life, based on the nine tenets that he personally follows along with his wife and kids. After sharing clips of himself eating raw meat online, he quickly amassed over 1.6 million followers that he likes to call ‘primals.’

Although King stated that he is natty, many people have suspicions about the veracity of his claims. UFC color commentator and popular podcast host Joe Rogan does not buy into King’s philosophy and dismissed the idea of him being natural. According to Rogan, King is simply putting up a gimmick and does not have a natural body.

Apparently, former UFC heavyweight and now podcast host Brendan Schaub, argues that most people can’t live the lifestyle Liver King does, which is why people despise him. In the same way as Mark Bell, Schaub himself was unclear as to whether Johnson possessed a natural physique or not.

Liver King talks about the benefits of following a natural lifestyle

In a recent video uploaded to The Diary of a CEO’s YouTube account, Liver King explained the benefits of following a lifestyle based on the nine ancestral tenets.

Having spent time with tribes in the wild, he shared his experience about the way modern-day primitive cultures live.

“They are happy as f**k. They are kicking our a** at life and they have nothing,” King said. “As soon as you start to meet with them, you feel it. You feel how happy, how fulfilled they are. They are laughing, they are smiling. A lot of these things, it’s just really clear. They don’t have shoes. One of the ancestral tenets is connect, they are connected to the earth 24/7 365 (days). Because of modern day shoes, elevated beds, buildings, and stuff like that, we hardly ever come into contact with the actual earth any more…

A lot of people will say (they came into contact with the actual earth) the last time they were at the beach. I was like, ‘what were you doing?’ They are like, ‘oh yeah, I was with my wife, we were holding hands, we were walking on the beach, under the sun.’ I’m like, ‘how did it make you feel?’ They go, ‘it’s one of the best memories.’”

King reported what he learned from the tribes and shared evidence of what he saw during his time with them.

“The earth has a slightly negative charge. We are electrophysical beings, every single cell is electrical in nature and so just by default, you see all of the primitive culture tribes connecting with the earth almost 24/7 365. This is one of them.”

“They are under the sun most of the day. They are hardly wearing any clothing, they are getting plenty of sun. Bonding is required in this culture. Everybody knows their purpose, everybody knows what their job is. When we go on a hunt, everybody knows who the lead hunter is, they don’t have to say anything.”

He shared some advice on how one can get better sleep.

“Some of the easy things you can do to sleep better is finish your last meal 3-4 hours before bed, get early morning sun at the same time every day. This helps set your bio-circadian rhythm so your body knows when to be alert and awake versus sleepy. Most people don’t realize this, if you really want to set up your sleep, it starts first thing in the morning.

Get early morning sun through the eyes, on the face, and on the skin first thing in the morning. So, get early morning sun, finish your last meal 3-4 hours before bed, take in the sunset as the final environmental cue that the day is winding down and then try and block these artificial lights, like blue light blocking glasses or just have fire light or candle light in the house.”

He compared the ancestral way of living to the primitive cultures of today and remarked how they already follow the lifestyle.

Liver King shared some practical tips to live a lifestyle based on the 9 ancestral tenets.

“Now we are bombarded with all these non-native signals, non-native chemicals. I always tell people, get your cellphone out of your pocket, put it in airplane mode if you are not using it, at least when you are sleeping. Turn your wi-fi router off when you are sleeping. There’s some really basic things we can do. Stop wearing petrochemical clothing, stop wearing xenoestrogen-laiden perfume. All these foreign substances wreak havoc on the endocrine system.”

The Liver King had recently revealed his blood work in a satirical response to Rogan. He performed a skit where he visits the doctor to get the results of his tests. It turned out that he was the doctor in the parody and showed the results come out as “primal.”

Liver King’s mission is to inspire others to live happier, more fulfilling lives by applying the nine tenets of ancestral living.