Check out how influencer Jesse James West handled living like Liver King for over two days. 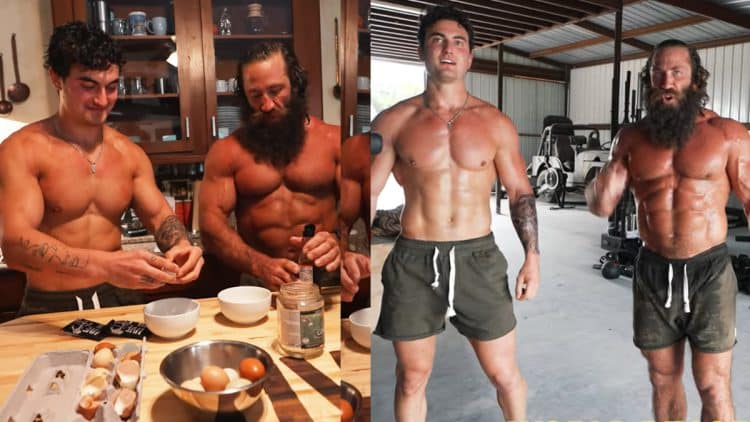 Brian Johnson, well known as Liver King, met up with fitness influencer Jesse James West and taught him a lesson in ancestral living. In a video shared on YouTube, Jesse James West shows how he survived eating, training, and sleeping like Liver King for 50 hours.

Liver King rose to prominence as a fitness influencer courtesy of his jacked physique and unique lifestyle. He practices ancestral living, which is depicted by nine tenets that he utilizes daily. The 45-year-old practices what he preaches and never minds sharing his raw meat diet with his gigantic following. By living out these tenets, Johnson says that it allows for people to achieve their “highest and most dominant form”.

When he’s not practicing the nine tenets, Liver King is promoting his lifestyle on various podcasts, spreading his message about ancestral living. One of Liver King‘s main assertions is that modern men have become weak and fragile, which he believes can be remedied by lifting weights and simulating hunts. Additionally, Liver King places importance on a tenet called bonding, which is described as spending quality time with a partner or significant other.

Jesse James West is a fitness influencer as well, who likes to challenge himself by trying out various training regimens and workout routines. The last time we saw West in action, he was training alongside bodybuilding legend Ronnie Coleman. While lifting weights with the 8-time Mr. Olympia was a daunting task, it appears West is ready for another challenge, albeit a more peculiar one.

Kicking off his ancestral experience, Jesse James West and Liver King made a toast with some raw bovine testicle, displayed on a platter with other types of raw meat organs.

“Who needs vegetables when you can get down on testicles? We got pizzle, which is penis. We got liver and we got some fresh bone marrow.” Liver King said.

After Jesse tried out some testicles, the two consumed liver and then followed that up with some pizzle.

Finishing off the platter of delicacies, Liver King explained that the bull penis is cooked because otherwise, Jesse would be chewing on it for three days.

Jesse then receives a pair of Liver King shoes as the two prepare for an ancestral-style workout.

Train Like Liver King with a “Simulated Successful Hunt”

Before training for the day, Liver King said he prefers to partake in a 24-hour fast before hitting an intense core workout.

“This is what I call the simulated successful hunt. We’re going to do 150, 200, 300 GHC [glute hamstring developer] sit ups and then we can eat whatever we want.” Liver King told West.

“I can’t flex my abs. Jesse said. That was one of the hardest core workouts I’ve ever done.”

After training, Liver King gives Jesse James West a lesson on hygiene. According to the ancestral expert, the armpits help detox the body by dispelling sweat. However, he warned Jesse about shaving the armpits and using deodorant as they block the body’s “thermoregulatory mechanism”.

The two refuel with another meal consisting of a whole shark and Jesse takes the opportunity to thank Liver King and Liver Queen for their hospitality.

“Use your hands [to eat]. There’s no rules like that here.” Liver King told Jesse.

“We got one burger. We got a femur for some bone marrow. So, we’re going to have some carbs, as you would say. Oh! We forgot the testicles.” James said.

Before finishing the meal, Liver King shows Jesse how to do a ‘primal activator,’ which involves matching each other’s energy.

“Yeah, you want to do it with us? So, what I’m going to say is ‘yeya boy!’ and you’re going to match that energy back.”

After dinner, West, Liver Queen, and Liver King practice wake surfing. Jesse wipes out a couple of times. To wrap up their eventful day, Jesse and Liver King take an ice bath/cold plunge. Again, the CEO of the Ancestral Lifestyle imparts another hygiene tip to West.

“I can’t tell if I’m high, in pain or if I just had an orgasm.” Jesse told Liver King.

Finally, it’s time for some sleep, but Jesse James West and his camera crew are taken aback by the ‘shield’ tenet of ancestral living, which requires a person to avoid seed oils, WiFi signals, EMF, and other man-made poisons. This meant that Jesse wouldn’t be able to contact his girlfriend before going to sleep. Liver Queen told Jesse that she planned to turn off the electricity before everyone goes to bed.

“Two hours before bed. They block the blue light. Yeah, and then you know, probably at 10:30 or 11, I’m going to turn the electricity off.” Liver Queen told Jesse.

“This is an experience bro. You guys think this is like normal life but this is different, very unique. I’m hungry but I’m craving carbs and like a flavored drink.” Jesse shared.

When the Liver King family is asleep, Jesse goes on an adventure through Brian Johnson’s house looking for some fruit to eat but all he could find were lemons. He decided to sneak out of the Liver King compound to call his girlfriend. Jesse was forced to go all the way down the road in order to get service.

Starting off the next day, Liver King introduces “The Barbarian” workout to Jesse. This workout included holding 70-pound kettlebells, wearing 70-pounds in a backpack and wearing 20-pound ankle weights — all while pulling 120-pounds on a sled for one mile.

Jesse James West managed to complete the brutal workout before Liver King at 1 hour and 16 minutes.

After the workout, the two refuel with some raw eggs. West and Liver King proceed by riding dune buggys at the Liver King ranch. Following the fun, Jesse can’t believe Liver King is ready to work out again but this time with an assault bike.

“We just set the world record for both completing the Barbarian. Just hours later, within a 24-hour period, we just murdered a for a new record, 600 calories, upper body only, on the assault bike.” Liver King said.

For the last time, Liver King and Jesse feast. The meal included roasted boar, bone marrow, liver, potatoes, and New York steak strips. It seems the ancestral lifestyle is starting to spread. Influencers are taking to social media platforms and sharing their raw organ meat dietary choices. One TikToker went viral back in March for eating a raw beef brain and underlined its nutritional value.

Judging by the time West spent with Liver King, it’s evident that utilizing all of the ancestral tenets is a monumental challenge for someone unaccustomed to the lifestyle. After eating, training, and sleeping like Liver King for 50 hours, influencer Jesse James West has a newfound appreciation for living like our ancestors.