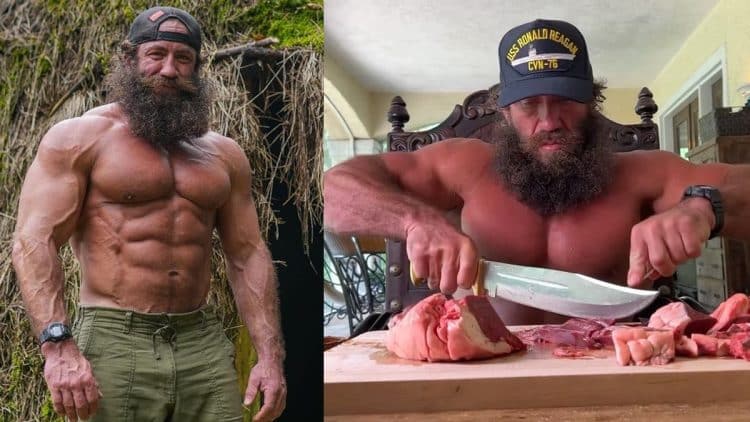 Brian Johnson, well known as Liver King, is a social media phenomenon who reached a crazy level of fame as a result of his raw organ meat diet and ancestral living. In a recent Instagram video, Liver King stomached a five-pound bovine heart before encouraging his followers to do the same.

Liver King has emerged as one of the most popular fitness influencers as of late. The 45-year-old has taken the world by storm with his ripped physique and obscure lifestyle. He lives by the nine ancestral tenets, which he credits for helping him achieve his ‘highest and most dominant form.’ Whether it’s sleeping, eating, or absorbing sunlight, all of these practices and more make up the lifestyle he preaches about on a daily basis.

The CEO of the Ancestral Lifestyle has taken to a number of podcasts to spread his noble message. He believes modern men have become soft and underlines the value of hunting, lifting weights, and spending time with your significant other, which represents another tenet called Bond. While many fans have jumped on board with the Liver King craze, there are some who have questioned his lifestyle and diet.

Podcast host Joe Rogan has made it clear he’s not buying the schtick Johnson portrays and believes the fitness star uses steroids. Liver King has since shot down these allegations, and said, he’s ‘never touched the stuff.’ After refuting Joe’s steroid claims a handful of times, Johnson has continued to push the comic to spread the ancestral message anyways.

Instead of feuding with Rogan, Johnson decided to show off a hearty meal he recently enjoyed. If you’ve never seen someone consume a five-pound bovine heart in one sitting, now is your chance.

In a recent post made to Instagram, Liver King eats a five-pound ‘pure’ bovine heart in one sitting.

Primal… Do you leave the dinner table feeling like sh*t?

If so, why not try something new?

Why not eat the same nutrient-dense foods humans have selectively consumed for millions of years?

Do these things and express the highest and most dominant version of yourself.” Brian Johnson wrote.

While his eating habits raise a few questions, the Liver King lifestyle is alive and well. Powerlifter Mark Bell recently visited the Liver King headquarters. Despite speculations about steroid use, Bell found no syringes, SARMs, or any growth hormone at his home. Bell added he doesn’t know if Liver King is clean but said the social media influencer is approaching a nine-figure income in light of his continued success.

According to former UFC heavyweight and podcast host Brendan Schaub, he says people are hating on Liver King because most people can’t live the type of life he leads. Like Mark Bell, Schaub too was left unsure if Johnson possessed a natural physique or not.

The movement to eat raw organ meat is growing. It seems more and more people are taking to streaming platforms like TikTok to show off their strange dietary choices. One user went viral back in March after consuming a ‘raw beef brain,’ and called it a high-protein breakfast without having to cook.

With the ancestral movement growing, Liver King hopes to affect change by encouraging others to live happier and more fulfilling lives through the nine tenets of ancestral living.

His wife and kids also practice the lifestyle, and Johnson doesn’t miss an opportunity to show them or the world how to live like a king, or a Liver Queen. After consuming a five-pound bovine heart on video, Liver King recommends everyone partake in eating nutrient-dense foods that our ancestors used to enjoy.