Brendan Schaub on Liver King’s Natty or Not Status: “It’s Triggering Because They Can’t Live That Life”

Former UFC fighter Brendan Schaub takes on whether Liver King is abusing steroids, "let him do his thing, who cares." 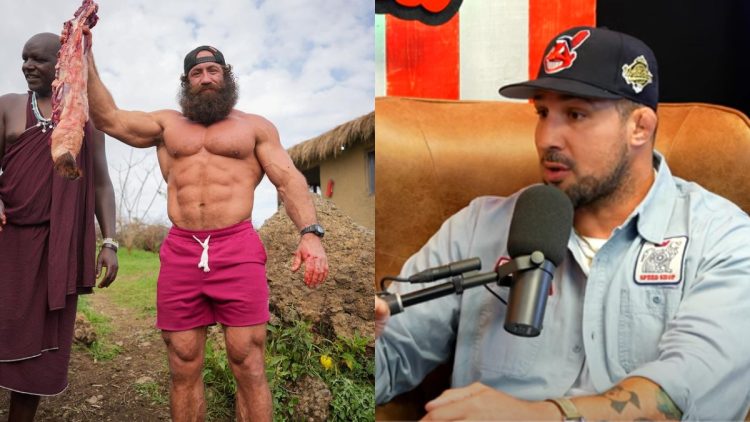 Popular social media sensation Biran Johnson (widely known as Liver King) has lit up the internet with his ripped physique and dedication to living by the nine ancestral tenets of life. In a recent podcast episode, Brendan Schaub, a former UFC fighter, dives into Liver King’s claim of being all-natural.

In a world dominated by technology and social media, Liver King is an outlier, living his life based on ancestral tenets he believes our forefathers used before life underwent drastic changes. His main tenet, as the name suggests, is consuming liver and other raw meats on a daily basis.

Liver King is known for unconventional workout routines as well, like pushing weighted sleds in front of Times Square in New York City. Despite consuming liver and exercising daily, many have begun to question Liver King’s ‘natty or not status,’ like Schaub’s friend Joe Rogan for example, who recently insinuated that Liver King’s doesn’t have ‘a natural body.‘

From 2009 to 2014, Schaub fought some of the best athletes in the world during his respective UFC tenure. Schaub, who regularly appears on the Joe Rogan Experience, took to his own podcast to discuss the recent fascination with Liver King, and whether or not he uses steroids.

On a recent podcast episode of Fighter and The Kid, Schaub gave his line of thinking in regard to Liver King being natural or not.

“He says he’s natural? What’s he look like, I’ll tell you right now. Bring him up. Oh NO! Hey… hey everybody stop. This is the guy that only eats Liver? Brendan Schaub asks.

“You know what the thing is though Mark? In my experience, gun to the head, would I say he’s on something? Probably. I will say though man, there’s some freaks out there. I’ve been around them. It’s just tough. [It’s] your genetic framework.” Brendan Schaub said.

Unlike Rogan, Schaub isn’t 100 percent certain that Liver King is on steroids. During Schaub’s time training at gyms, he mentioned that there were always ‘some freaks out there.’

Mark, who helps produce the podcast, stressed how much he appreciates the nuggets of wisdom offered by Liver King.

Given the hate or negative attention that Liver King has dealt with lately, Schaub questions if the social media phenomenon is fanning the flames by telling his fanbase of ‘primals’ that he’s purely all-natural.

Mark, who joined in on the discussion, asserts that Liver King may not want to discuss steroids openly. Comedian Bryan Callen chimed in too, saying that Liver King has made a name for himself by being ‘fun’ and eating raw meat.

“He might feel like he’s in a position where he can’t talk about it openly. Look Ronnie Coleman was on Jay Leno 20 years ago talking about, saying ‘I’m all natural, I’m not on steroids.’ It’s taboo for certain things.” Mark says.

“The guy has created a name for himself by being an outstanding thing to look at. He’s just fun. He preaches, he fuc**n eats raw meat. He’s making money.” Callen added.

Schaub believes Liver King is just ‘doing his thing,’ and compares his plight to that of OnlyFans models who are getting paid despite having a ‘fake ass’ or ‘titties.’

“Let him do his thing, who cares. Yeah maybe he doesn’t have a prescription plan. But how is this different from some girl getting a fake ass and titties and starting an OnlyFans. How many girls have fake shit on their bodies and you still pay for it. ” Schaub says.

“People hate it. Why do they hate it Bryan? It’s triggering because they can’t live that life.” Schaub says.

The former UFC heavyweight is confident that the people complaining about Liver King’s shredded build have their own set of insecurities to deal with.

“I would imagine those people hating on him… I’d be willing to bet their avatar isn’t even their real photo. They’re even scared to put that out there. Let alone, this guy in fuc**n jean shorts and raw liver, you know.” Schaub says.

“I also think it’s weird how people decide what to put up with as far as cancel culture. I’ll go through people on podcasts or comedy shows, where they allow this guy or not this guy. Schaub added. Or they’ll subscribe to this guy’s podcast but not this guy.”

In light of so many steroid accusations, Liver King joined popular YouTuber/boxer Logan Paul on a podcast to discuss his natural status. After denouncing the steroid rumors, Liver King backed up what he had to say by suggesting his legs would be much bigger if was indeed on steroids.

Brian Johnson’s rise to becoming a superstar has been filled with speculation about his natty or not status. Rest assured, Liver King is committed to his ancestral way of living, which left Schaub, and Callen impressed by the degree of commitment he applies daily.