Liver King linked up with powerlifter Mark Bell, who questioned his 'natty or not status': 'I searched his homes, I didn't find a syringe, a SARM or any GH.' 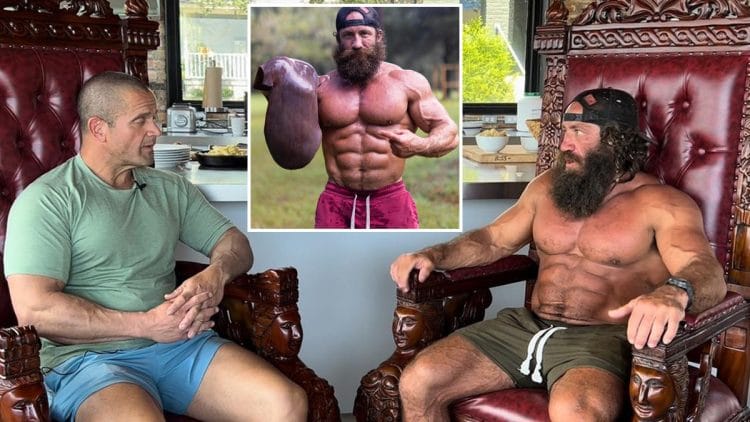 Life as we know it is dominated by technology, and social media, though Liver King operates by a different set of rules. Instead of conforming to the status quo, Liver King abides by the nine tenets of ancestral living. From sleeping, eating, and moving, to absorbing sunlight for a minimum of ten minutes a day, there are a number of concepts Liver King advocates for daily. Most importantly though, the social media phenom eats raw organ meat daily, crediting his protein-rich diet for the way he looks and the way he feels.

Sporting a shredded build, many in the fitness community have questioned Liver King’s ‘natty or not’ status, most notably, popular podcast host Joe Rogan. According to Rogan, the social media star doesn’t have a ‘natural body’ and likely has ‘an ass filled with steroids’. This, of course, prompted the famous Carnivore to respond to the accusations. Joining YouTube and boxing star Logan Paul on the Impaulsive podcast, Liver King shot down Rogan’s presumption, and made it clear that he doesn’t ‘touch the stuff’. He maintained that if he was on steroids, his lower body would be on par with his massive upper body.

Mark Bell, a bodybuilder, but widely recognized for his impressive feats of strength as a powerlifter, has also opened up about his use of steroids in the past. During his storied career as a strength athlete, Bell has supported the use of performance enhancing drugs, and has mentioned that legal supplementation in the U.S. lacked adequate testing in the past. While many have speculated about Liver King using steroids, Bell is confident that he’s not after searching the successful entrepreneur’s house.

Mark Bell: “Is the Liver King Clean? I don’t Know”

Visiting the Liver King headquarters, Mark Bell shared a couple of Instagram posts where the pair spoke about healthy living habits and whether or not the star uses steroids to achieve his ‘beyond impressive’ physique.

Bell asked Liver King outright about his use of steroids, to which the star responded ‘never’. After failing to find even a peanut butter cup at Liver King’s house, Bell ensured his following that the social media star’s abs are real and that he can only go off the answer that Liver King provided.

Liver King is adamant that once people start living by the 9 ancestral tenets, the body starts to adapt and becomes better equipped for biological function.

“There’s just no way it fuc**n works. You know, I used to work for a bio tech company. One of the engineers, somebody said something like that, and he goes, ‘you can’t apply logic to a biologic system, it doesn’t work like that because it adapts.

But here’s the thing: how much you want to bet when you start living these nine ancestral tenets… the body knows what the fuc* to do with all those calories. It knows what to do with them.” Liver King told Mark Bell.

Bell and Liver King moved on from steroids to discuss healthy habits in conjunction with ancestral living. The 45-year-old liver-eating machine believes that once someone practices the nine ancestral tenets, their ‘biology is the most intelligent it’s ever been’.

“You’re reverse T3 goes through the roof; it’s going to slow you the fuc* down. You’re not going to be interested in sex because how dare you be worthy enough to propagate her. Again, the same thing happens, there’s a reason why you don’t keep losing weight. So, again, it’s extremely nuanced and when you do all nine ancestral tenets, your biology is the most intelligent it’s ever been.” Liver King explains.

“Nobody really disputes that the basal metabolic rate is where it’s at right. I don’t think anyone disputes that your muscle mass, your lean mass is going to determine what your metabolism is at. If that’s the case, then I don’t think you can really debate sleep for example. Liver King continues. If your testosterone can go 50 percent, 60 percent, because you don’t sleep good, well, you know how that affects your metabolic rate and your muscle mass.”

Brendan Shaub, a former UFC heavyweight fighter, was the latest to discuss whether or not Liver King uses steroids. By the end of the discussion, Shaub was left uncertain but stressed that ‘it’s triggering’ because other people ‘can’t live that life’.

For powerlifter Mark Bell, after a thorough search, he believes ‘Liver King is real’. He appreciates the way in which the 45-year-old conducts his life and business operations. After joining Liver King at his home, Bell was left with no evidence or indication that the social media star is using steroids but values his unique approach to living life.