These strength athletes are all the motivation you need before your next calf workout. 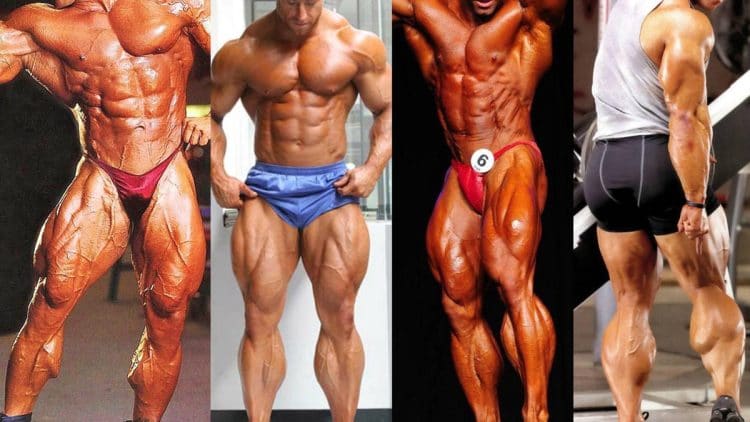 Biggest Calves In The World

Lower legs have been the cause for the decline of many titans, leave alone mere mortals. Most of us are aware of the mighty Achilies’ story. Someday in the future, we might see stories about bodybuilders that could not conquer a Sandow due to their lagging calves.

However, this article is not about weak lower legs. This article is about people with the biggest calves in the world, aka the envy of WWE star Brock Lesnar.

In bodybuilding, a lot is dependent on your genetics. It doesn’t matter how hard you train or how much protein shakes you gulp down a day; if you were dealt a lousy hand in the genetics game, you’ll probably have a tough time carving your dream physique.

Now, it isn’t necessary that a person will have poor muscle genetics overall. A lifter might have great pectoral genes but struggle with developing their back.

Calves are one of the most stubborn muscle groups for many people. However, this article is about people who have nailed the calf game with their hard work and resilience (and genetics).

Biggest Calves in the World

Here are the 12 people with the biggest lower legs on the planet:

If you’re looking for a poster to hang in your room for calf training motivation, let it be of Eric Frankhouser. At the peak of his bodybuilding career, the pro bodybuilder had 24-inch calves, making them the biggest in the world.

Notably, the bodybuilder’s calves were all muscle, and he held little to no fat on his lower legs. One could argue that Frankhourser’s calves were so marvelous they overpowered his upper body, which is something you don’t usually hear.

From the front, Frankhouser’s calves resemble a cobra’s expanded hood. It’d be safe to say his lower legs could give a rookie bodybuilder’s “cobra back” a run for its money.

During his competitive days, not only were Frankhouser’s calves big but they also were ripped and balanced. “The House” credited his genetics for his ginormous lower legs.

Ben Pakulski, or BPAK as he’s popularly known, had one of the biggest calves in pro bodybuilding. Even if you had never heard of Pakulski before, you’ve, in all likelihood, seen photos of his calves on the internet.

Like Frankhouser, “Pak-Man” argued that his genetics were the main reason behind his freakish lower legs. However, Pakulski is a perfectionist and believes in training his muscles with textbook techniques.

BPAK takes his calf workouts to the next level by capitalizing on every rep. He contracts his calves at the peak and stretches them at the bottom for optimal muscle fiber recruitment.

Dorian Yates, aka “The Shadow,” changed the sport of bodybuilding in the early 90s and shaped it to be how we know it today. He brought in the mass monster age, earning him the moniker “The Original Mass Monster.”

At his career’s peak, Yates’ legs were arguably his strongest suit. His lower body had the size, separation, conditioning, and his striations were the subject of fables.

As per experts, Yates’ was in the best shape of his life at the 1996 German Grand Pix. Check out his posing routine from the show in the video above. Anyone that says they’re not impressed with The Shadow’s conditioning is lying.

Interestingly, Yates’ performed just three sets in his calf training routine. The first set of the first exercise was a warm-up, and he went all-out in the remaining two sets.

The now-retired seven-time 212 Olympia champ had one of the best symmetry and physique proportions, and his calves looked like they had a life of their own.

“The Welsh Dragon” routinely switched up his calf training. He experimented with low reps with heavy weights and high reps with relatively light weights to keep his muscles guessing.

James “Flex” Lewis’ calf development is commendable, given his five-foot-five structure. The Englishman’s calf workouts can last up to 30 minutes, something only a few other bodybuilders can say.

Additionally, the former 212 bodybuilder uses circuit training for his calves, consisting of supersets, tri-sets, and giant sets. “I do so many sadistic things for legs,” adds Lewis.

It’s time for some old-school action. Platz arguably had the best (and the biggest) legs of his time. Platz is one of the most revered personalities in the bodybuilding community. He is considered the oracle of leg training.

“I’m going to tell you some stuff that I never really tell most people. Back in my day, everybody did calves like six days a week, but I had the most success training calves twice a week. With my body type, really intense calf training twice a week proved to be most effective. I did normal calf raises, standing calf raises, seated calf raises primarily, those two major exercises,” said Platz.

The Quadzilla liked to go heavy in his calf training regimen. He has previously revealed that he performed seated calf raises with 1,500 pounds on the bar. Besides the heavy sets, Platz also employed static holds in his calf workouts.

Fancy training like Tom Platz? Keep your sets heavy while maintaining a textbook form. Furthermore, heavy weights should not be an excuse to lift with a shabby form.

Check Out: Tom Platz Leg Workout: Train Like a Champion

Standing at five-foot-four, Priest is another short athlete on the biggest calves list. Besides his short frame, Priest’s contest weight was around 200 pounds, and he could go head-to-head with the biggest guy on stage.

Lee Priest is close to Platz and used his training techniques to bring up his physique. The Australian bodybuilder’s calves looked like someone had slapped clay on his lower legs; they had the perfect shape and size.

Mike “The Boston Mass” Matarazzo was one of the most impressive and entertaining bodybuilders of his time — a combination that is hard to find. A true showman, there was never a dull moment when “Mad Mazz” stepped on stage.

Mike’s calves were thick, had the separation, and popped out every time he raised his heel off the floor. Matarazzo credited his calf development to his boxing training and the countless hours he spent on his toes, anticipating his opponent’s next move inside the ring.

Although Matarazzo never won a pro show in his career, he gained a lot of admiration from bodybuilding fans due to his unique training principles and on-stage presence.

Check Out: 21 Bodybuilders Who Died of Heart Attack

Whenever Dallas “Big Country” McCarver stepped on stage, his calves stood out and overshadowed his competitors. He knew his strengths and didn’t miss a chance to show off his impressive lower legs.

The late bodybuilder was turning out as a force to be reckoned with in the pro circuit. He was strong, big, and cut. According to many bodybuilding experts, he had all the ingredients to be a future Mr. Olympia champ. However, destiny had something else planned for him. He passed at the young age of 26.

Check Out: Hany Rambod Discusses Why Bodybuilders Are Dying Young Like Dallas McCarver and Bostin Loyd

Jay Cutler had achieved what many had deemed impossible — beating Ronnie Coleman. Cutler brought the size without compromising his definition and muscle separation to dethrone “The King.”

While the battle between Cutler and Big Ron was close in most aspects, the four-time Mr. Olympia champ had a clear lead in the lower leg department, where he had the eight-time Mr. O champ beat by a margin.

Cutler started training his calves with full intensity because his sister gave him a tough time due to his tiny calves. Jay implemented and made the one-and-a-half rep method in calf training famous.

In this training technique, Cutler performed a full rep on a calf raise exercise, came back halfway down, then contracted the calves again before lowering the weight back down completely.

Branch Warren is known for his hardcore training style and legs that resemble tree trunks. Per Warren, he is genetically gifted with great calves and doesn’t have to train them as hard as some of his competition.

Warren is known for his dense and thick muscles. He placed runner-up at the 2009 Mr. Olympia behind Jay Cutler after giving him a run for his money.

Sonbaty was a mass monster and dwarfed his competition on stage. His lower legs measured a beastly 20 inches and had great development of his inner calf heads.

Nasser El Sonbaty was a freak of nature. Sonbaty took a controversial second place at the 1997 Mr. Olympia behind Dorian Yates, who was suffering from a biceps tear.

Eddie Hall is the only non-bodybuilder on the biggest calves list. The 2017 World Strongest Man has 23.5-inch calves. Genetics and plane and bus pulls surely contributed to his beastly calves.

While the bodybuilders on the list have aesthetically appealing lower legs, Hall probably has the strongest, most functional, and biggest calves on the planet.

Sadly, there isn’t a section in the Guinness Book of World Records to acknowledge the hard work and commitment of folks who spend a good amount of time every day to carve their physique. However, if you’d like a rundown on the biggest muscle groups, check out the related guides below:

For most people, calves can be a resilient muscle group. You need to ensure you are switching your training intensity and volume consistently so that you don’t hit a plateau. Best of luck.