Kenny KO didn't hold back in asking Liver King some pressing questions about steroids and whether or not he's had ab surgery/implants. 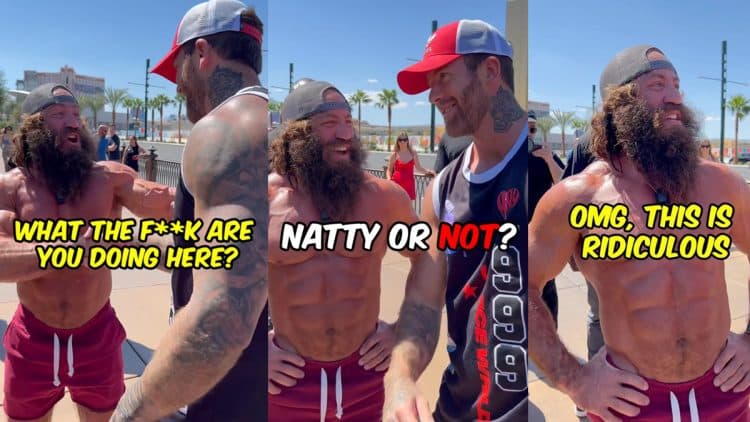 Two titans in the fitness influencer industry had an impromptu meet-up when Kenny KO ran into Liver King. In a series of recent Instagram videos, Kenny KO pressed Liver King on his claim of being natural and discussed whether or not his abs are authentic or enhanced with surgical procedures.

Celebrated for his controversial content and online videos, Kenny KO is a fitness influencer who has reached impressive levels of fame. He is well known for his ‘natty or not’ videos, a segment where he routinely asks athletes and bodybuilders if they use steroids and/or performance-enhancing drugs.

Kenny KO isn’t afraid of public backlash or getting on a subject’s nerves during his videos. He’s proven as much recently with self-proclaimed lifetime “natural” bodybuilder Mike O’Hearn. O’Hearn is a 53-year-old but his aesthetics, huge frame, and luscious head of hair would suggest he’s much younger.

Another influencer who rose to stardom in the past few years is Liver King — his ancestral lifestyle became his claim to fame. In addition to eating raw organ meat, Liver King became the center of a ‘natty or not’ debate due to his ripped physique.

Liver King participated in an online beef with Joe Rogan for months denouncing the use of steroids. Rogan claimed that he’s filled with them and isn’t buying Liver King’s schtick. This time, the organ-eating primal is answering directly to Kenny KO on similar matters after the two ran into each other.

In the clip below, Kenny KO confronts Liver King for the first time, and jokingly tells him he’s trying to determine the primals from the sub-primals. They exchange pleasantries, then Liver King’s two sons show up. The video cuts with Kenny KO asking the boys if they also do Tren [Trenbolone].

Find the first clip from their encounter below:

“Are you guys on Tren as well? No, I’m just kidding,” Kenny chuckles.

“I always say it all the time — it’s not even a joke. Their friends are over and we get water — and I say, ‘hey, you know what’s in the water? Steroids of course,” Liver King said.

Kenny directly asks Liver King if his abs have been enhanced with surgery.

“It’s always just a metaphor, if you do these things, and express your highest and most dominant form, you’re going to kick ass in fuc**ng life,” Liver King shared.

Before the video ends, Kenny told Liver King to stop flexing his abs so he can determine whether or not he’s had ab surgery. Earlier this year, Liver King joined the Nelk Boys on the Full Send Podcast, where he divulged that his abs are worth “10K each” and that he’s rocking “100K worth.”

“We were on a podcast last night, some guy said, ‘someone really intelligent said something about ab etching. He denied the implants, but he said you probably got ab etching.’ Here’s the thing, I’m going to tell you, I’ve been flexing my abs for so many fu**ng years when I take my shirt off — for me.

“Unflex, and I can tell people if it’s ab etching or not.” said Kenny.

“If they are the same unflexed, then we have a little bit of a situation,” says KO.

“Come on! Let me just tell you this, this hair has never seen shampoo. This body has doesn’t see soap ever.”

In response to Liver King’s claim of never using shampoo/bathing, Kenny asked if his former self (Brian Jonhson) indulged in such practices.

“When I was Brian, I didn’t have this fuc**ng head of hair when I was Brian. Of course, [I] did all the modern-day manicured shit, says Liver King. “Here’s my point, I get out of bed, and I put on the same pair of shorts everyday basically. I only wear shoes when I go into the modern world. I’m the modern wild free version of myself.

You think this guy is going to get liposuction? I’ll tell you what, it wouldn’t be on the abs. It would be on the love handles that hang over the fuc**ng shorts,” says Liver King.

For their final interaction in this video series, Kenny KO asks Liver King outright about his ‘natty or not’ status.

“Oh my God. This is ridiculous. I thought we were way past that. In terms of Liver King — those guys are way past that. There’s still a bulk of minority of two percent that still ask that question. For the record: it’s natty right. It started with the accusation, ‘natty or not.’ Then it turned into ab implants, then ab etching, now I don’t know if you heard – hair implants”

Liver King said in 2018 that he had his Myostatin gene modified in Singapore. Myostatin is a protein that acts on muscle cells to inhibit or take away muscle growth.

“I don’t know if you heard this one, but in 2018, I went to Singapore, I was the first person to have this procedure done. I had gene editing done. I had my myostatin gene modified. That I will confirm is true.”

“Does anyone know that up until this point?” asked Kenny.

“No. Not up to this point,” said Liver King.

Find the fourth and final video below:

When Liver King isn’t being grilled on his ‘natty or not’ status, the popular influencer is preaching his ancestral message to the masses. He recently teamed up with fellow Carnivore enthusiast, Dr. Paul Saladino. The two made a video stressing the dangers of feeding children processed foods and seed oils.

Liver King claims he doesn’t use steroids and maintains that his abs have never undergone surgery. After a candid discussion with Kenny, Liver King will continue to lead the charge spreading the ancestral lifestyle message.