Podcast host Joe Rogan joined Dr. Andrew Huberman to discuss all things Liver King: 'to have a physique like that and not be on steroids, you would have to be in the .000001 percent of the human population' 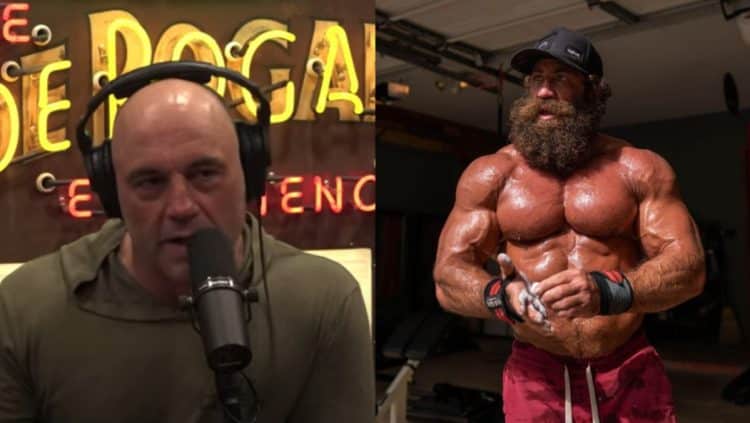 Host of the most popular podcast on earth, Joe Rogan has reached a level of notoriety that few can rival. In a recent video, Rogan and Dr. Andrew Huberman discussed Liver King’s ongoing claim of being natural.

Rogan, also an Ultimate Fighting Championship (UFC) color analyst, is accustomed to working with athletes and representing them to the best of his ability during pay-per-view broadcasts. When his schedule isn’t log jammed with comedy ventures or commentary duties, the 54-year-old routinely hosts The Joe Rogan Experience. His podcasting platform is unique, and Rogan is celebrated for his command of a broad range of complex subjects while still finding a way to convey important details to his audience.

Joining Rogan on a recent podcast was Dr. Andrew Huberman, an American neuroscientist and the associate professor to the Department of Neurobiology at the prestigious Stanford University School of Medicine. Rogan and Huberman connected recently to discuss social media star Liver King.

Liver King (real name Brian Johnson) rose to prominence over the past few years mainly due to his organ, all-meat diet, which he says factors largely into how he is able to sport such a ripped physique. Operating by the nine ancestral tenets, Liver King believes people, in general, can reach their highest and ‘most dominant’ forms by practicing these principles he lives by daily. However, Rogan and Huberman both agree that some of what the viral sensation is proposing is simply not true.

Joe Rogan and Huberman took the opportunity in a recent video to dispel some of the misconceptions relating to Liver King.

“The Liver King thing drives me nuts because that guy is on steroids. Just shut the fu** up. I know he’s eating really healthy. It’s clear he’s eating all these animal foods and you know, he’s eating organ meat, which is very rich in nutrients, and that’s true but he’s dodging the main bullet.” Joe Rogan told Dr. Huberman.

While Joe accepts that Liver King lifts weights and eats nutrient-dense foods, he refuses to believe that he has a natural physique. In fact, the podcast host made it clear that the chances of Liver King being natural with that physique are astronomical.

“Well, look at him. Do you know how rare it is to have a physique like that and not be on steroids. You would have to be in the 00000.1 percent of the human population. Just rare genetic freaks. I don’t care how much you lift weights, that is a freak physique.”

This isn’t the first occasion where Rogan used his platform to pour cold water on Liver King’s assertions. Back in April, Joe said the famous ‘primal’ had an ass filled with steroids. In response, Johnson replied to Rogan’s ‘dangerous’ allegations, before once again echoing that he has a natural body.

Dr. Huberman disagrees with Liver King’s claim that consuming raw organ meat will result in those nutrients traveling to whichever part of the body need it most. He added that there is no evidence to support these claims.

“One of his main assertions, and others have made this assertion, is that when you eat an organ like a testicle or a liver, that the nutrients in that organ are specifically channeled to the organ that it would most benefit from. Huberman said.

“If I were to just put that through my knowledge of hormones and biology, I would say TRT. Huberman added. “There’s no evidence that I’m aware of that if you eat, say liver, that the nutrients are specifically directed towards your liver. There is no evidence.”

Huberman doesn’t argue that organ meats are high in nutrients.

“I think it’s because that there are nutrients in for instance, in liver. Very high concentrations of Choline, a precursor for Acetycholine. It is true that liver is one of the most Choline dense foods in the world. Far more than an egg far more than any vegetable or nut will give you.” Huberman shared.

However, Huberman took issue with the claim that consuming the liver will result in the nutrients being diverted to the liver.

“You can see how the lore would emerge that eating liver is really good for you because it is. If you’re interested in getting a lot of Choline, Vitamin D, or Vitamin A and other things of that sort. But the idea that it will be diverted specifically to your liver, that seems kind of crazy.”

Given the attention Brian Johnson has attracted with his obscure lifestyle and diet, other podcasters have welcomed the CEO of the Ancestor lifestyle onto their platforms. Liver King joined the Full Send Podcast recently and grabbed headlines after joking about ab implants. While some of the hosts were left unsure if he was telling the truth, Liver King said his abs are a byproduct of working hard for 35 years.

Brandon Schaub, a former UFC fighter and common attendee of Joe’s podcast also chimed in and gave his thoughts on the Liver King situation. For the former heavyweight fighter, he believes people are ‘triggered’ by Liver King because they can’t live the type of life he is currently leading.

Without a doubt, Liver King has taken the world by storm with his shredded physique and odd workout videos. Bottom line, Joe Rogan isn’t buying into Liver King’s natural status, nor does Huberman agree with his conclusion about organ meat traveling to areas of the body that need it most.