Stefi Cohen and Tennyson went to war during their latest workout collaboration: 'Whoever loses has to wear this [horse] mask and take a punch from the other person' 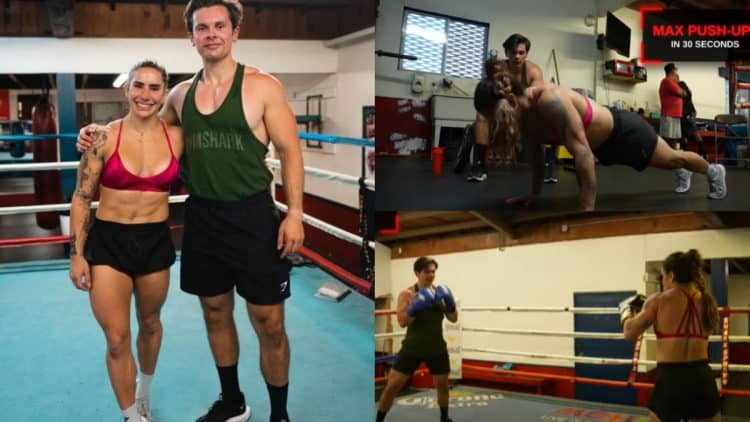 Stefi Cohen has established herself in a number of sports and recently accepted a challenge from fitness influencer Will Tennyson. In their latest collaboration, the 25-time powerlifting record-holder Stefi Cohen joined Tennyson for a game of exercise ‘H-O-R-S-E.’

Stefi Cohen cemented herself as a multi-faceted athlete over the past several years. From bodybuilding, powerlifting, and CrossFit to combat sports — she’s tried it all, and for the most part, found a lot of success along the way. She has a wealth of experience training with popular athletes. In the past, one training session saw her join 2017 World’s Strongest Man Eddie Hall for a grueling shoulder workout.

Cohen has also trained CrossFit. She was joined by elite CrossFit competitor Brent Fikowski (2017 CrossFit Games runner-up) for a brutal workout that included, Plyo push-ups, deck squats with a kettlebell, squats using dumbbells, and burpees combined with a dumbbell snatch.

As of late, Cohen tested the waters in the sport of boxing. She won her boxing debut by knockout. Stefi has compiled a respectable combat sports record, though endured her first loss in August when she was defeated by Devany Cuevas via decision. In her latest challenge, Stefi took on influencer Will Tennyson to see who comes out on top in a game of exercise ‘H-O-R-S-E.’

In a video shared on YouTube, Stefi and Will teamed up for a demanding workout challenge. Will stated that whoever loses will have to wear a horse mask and get pummeled inside the ring.

“Alright Stephanie, we’re going to go back and forth with challenges. Whoever loses that challenge will get a letter, all the way up to H-O-R-S-E. Whoever loses has to wear this [horse] mask and [they have to] take a punch from the other person,” says Will Tennyson.

Stephanie kicks off their ‘Horse’ style workout with jumping rope.

“I feel like we should do best of three,” says Stephanie Cohen.

On Cohen’s first attempt, she managed to jump the rope 108 times whereas Tennyson managed 63 jumps.

For round two, Cohen fired off 112 jumps. Tennyson tells Cohen that if he’s able to do 120 then he should win the round. Before continuing, Cohen shared that if Tennyson ends up losing, then he has to change his YouTube channel name to “Dr. Stefi Cohennyson” for 24 hours.

For round three, Tennyson pulled off 99 jumps. As a result, he was given the letter ‘H’ after losing to Cohen.

The pair move on to wide grip pull-ups to test their strength.

“There’s a lot at stake there, you know. I can feel that you got kind of nervous there,” says Cohen.

Cohen and Tennyson test their squat strength next.

[My 25 powerlifting titles] don’t count [during this workout] because I’ve been boxing for two years now.”

According to Cohen, her max squat is a staggering 510 pounds.

“I feel unsafe with this squat rack. This is like from the Cold War,” Tennyson said.

Before beginning, Stefi specified what will count as an official squat.

“The standards for this squat, are hips below the top of the knee. If I don’t see that, then it doesn’t count as a rep.”

Will pulled off 16 squat reps.

After Will asks Cohen to use the same weight he used, Cohen explained that CrossFit standards state that men lift heavier than women.

During Cohen’s turn, she managed to smash 25 reps.

They move to the speed bag next, but Tennyson struggles with establishing a rhythm.

The contest transitioned to push-ups next. Cohen wasted no time and completed 41 reps.

“I want to see your elbows fully locked,” Cohen told Will.

Controversy ensued after Will performed his push-ups. Cohen’s boyfriend decided not to count four or five of his reps because his elbows didn’t lock out. In the end, he managed 40 to Stefi’s 41.

Will got back in the win column on the super sprint. The race was incredibly close, but Will’s long reach helped him reach the finish line faster than Cohen.

Will and Stefi move into the boxing ring for the next challenge.

“The next challenge is going to be each person has 10 minutes to memorize their combination. After those 10 minutes, the best to complete five rounds of that combination without mistakes and in the shortest amount of time wins,” explained Cohen.

As punishment, Will Tennyson puts on a horse mask to take some damage inside the boxing ring. After taking Stefi’s best shot, her boyfriend who fights in Bare knuckle boxing gave him a striking demonstration.

Before calling it a day, Tennyson and Stefi trade some punches inside the ring.

This wasn’t the first time that Will Tennyson joined an elite-level athlete for a brutal workout. He joined forces with seven-time Mr. Olympia winner Phil Heath a few weeks ago. The two pushed through a tough arm workout before Heath guided Will during a posing routine.

RELATED: Stefi Cohen Shares How She Deals With Haters Of Muscular Women

Tennyson struggled to keep up with Stefi Cohen, who ended up winning the exercise contest. Judging by her conditioning in their recent video, Cohen is staying in great shape while she’s away from the boxing ring.