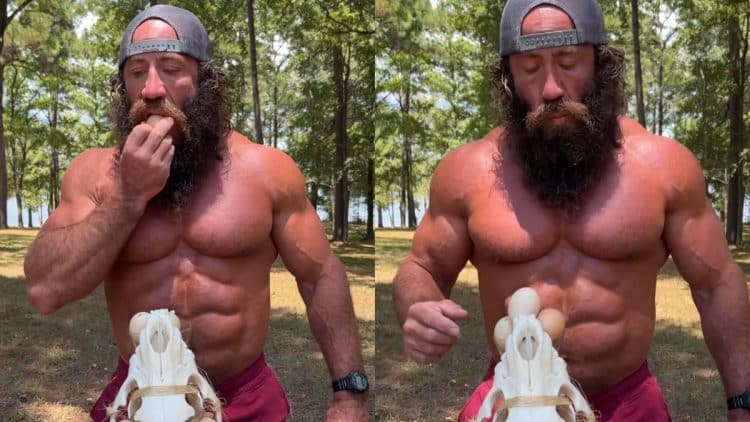 Social media sensation Brian Johnson aka Liver King is notorious for his insane physique as well as his unique eating habits. In a recent video uploaded on Instagram, Liver King consumed a raw egg every 10 seconds for a minute straight.

Formerly known as Bryan Johnson, King transformed his lifestyle completely to become a true “primal” by adopting an ancestral way of life. He made headlines online after clips of him eating raw meat went viral. King believes in the nine tenets based on the way our ancestors used to live and has amassed over 1.7 million followers on Instagram.

The 45-year-old fitness influencer boasts a jacked physique, which he credits to his ancestral lifestyle. Fitness influencer Jesse James West followed in his footsteps and tried to eat, train, and sleep like King for 50 hours. Under King’s guidance, West munched down raw organs, including testicles, liver, bone marrow, and more cuts. Jesse reported positive findings from the experiment and stated that King’s workout was one of the most challenging he had ever done.

Although many people seem to have a liking for King’s message of connecting with nature, popular podcast host Joe Rogan is not sold. Rogan is convinced that King is putting on a gimmick to attract more business for his supplement company and even went as far as to say that King, who claims to be natty, had an “ass filled with steroids.”

In a recent post uploaded to his Instagram, King shared a clip of himself devouring a raw egg every 10 seconds for a minute straight, with his total tally of eggs eaten coming to six.

“Bet you didn’t think Liver King could devour a raw egg every 10 seconds, did you… I don’t always put ’em down the hatch at record speed… unless there’s an opportunity to compete. The point is, I’ve been eating raw eggs for over a decade. It was never harmful to our early ancestors.

“Chances are it’s not harmful to you. Fertilized raw eggs contain all the raw materials to sustain life (especially those required for mTOR, growth, and performance). Get on the EGG train!”

He encouraged his fans to make eggs a regular part of their diets and challenged them to consume as many eggs as he did, but on a regular basis. While it may not seem like the best idea for everyone, Liver King strongly believes these measures will help someone live a healthier life.