Liver King responded to Rogan's claims that he was putting on a show. 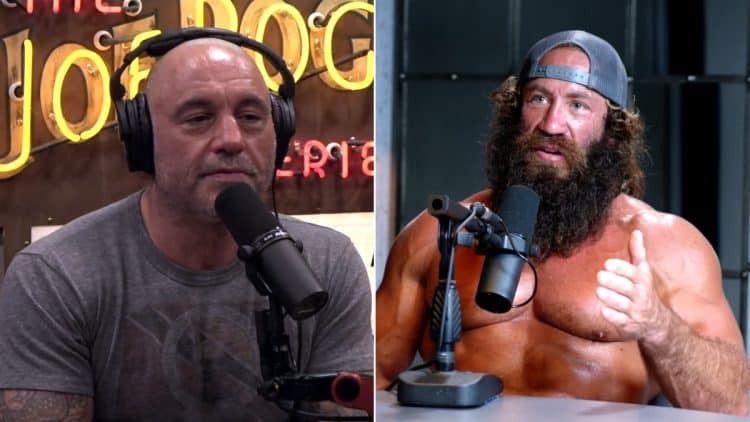 Internet sensation Liver King went viral online after sharing various clips of his unique workouts and consuming raw meat and organs. In a recent video uploaded on The Diary of a CEO, King hit back at the critics for bashing his way of life.

Liver King gained momentum for promoting an ancestral lifestyle based on the nine tenets. He believes the modern way of living works against our natural instincts and encourages his 1.6 million followers on Instagram to follow in his footsteps. King proved his dedication by giving up his real name, Bryan Johnson, in order to be a true “primal.”

Many people got attracted to King’s ancestral lifestyle. Some have expressed doubts about whether it is practical to live like him. Fitness influencer Jesse James West took inspiration from King and tried to eat, train, and sleep like him for 50 hours. Jesse tried out raw meat organs, including testicles, liver, bone marrow, and more cuts. Jesse also reported positive results following one of the hardest workouts of his life.

The 45-year-old sports an incredible physique, with a significant amount of muscle mass while also being ripped. King claims that he is natty and has not dabbled in steroids. Popular podcast host Joe Rogan is not a fan of King and believes he is only putting on a show to gain a following. Rogan dismissed King’s claims of being natural stating “he’s got an ass filled with steroids.” He referenced Derek from MPMD’s breakdown of King on his YouTube channel, suggesting it is better to cook meat rather than eat it raw.

Some of his recommendations might seem intense. Liver King was recently seen devouring a whole stick of raw butter in one go. He motivated his fans to replace margarine and use butter as a substitute.

In a recent video uploaded on The Diary of a CEO, Liver King shared his thoughts on the criticism he received from Joe Rogan. He looked at the bright side of gaining more exposure through Rogan’s comments and argued against the claims that he was on steroids.

“Oh, (I was on) cloud nine. I’ve entered his ecosystem. Joe Rogan is talking about Liver King. You know how obscure I was to most of his audience before he’s talking about me. So, I love it. Now I have the opportunity to engage deeper with this idea. I think it’s dangerous when somebody points a finger and has a self-limiting belief about themselves or somebody else or anything for that matter.

King called for a spot on Rogan’s podcast Joe Rogan Experience to have a direct conversation with him and explain his teachings in detail.

“What I want is the opportunity to correct that. I want the opportunity to go on his show, and talk face to face. At the end of the day, there is a lot of hate and criticism, and when I say a lot, it’s probably about 5% of the vocal minority… When we talk to each other these are just words and these are vibrations that go into our ears and then our brain assigns meaning to it. Nobody can really offend you.

All I ask is for the opportunity to have a conversation with him face to face because all nine ancestral tenets allow us to express something that was otherwise impossible… What I hope at the end of the day you say, ‘your physique is the least impressive thing about you.’”

King wants Rogan to not draw conclusions before getting a chance to talk to him.

“If you say, ‘he’s got an ass full of steroids.’ I think what you’re saying is you gotta do that if you want to look like him. Number one, I don’t do that, and number two, what I want you to say is, ‘I don’t know.’”

Liver King had issued a response to Rogan by sharing the results of his blood work in a parody. He created a short skit where he went to the doctor for the test. As it turned out, he was also the doctor and showed his results, which came out “primal.” King took Rogan’s comments in stride and thanked him for helping promote King’s message.