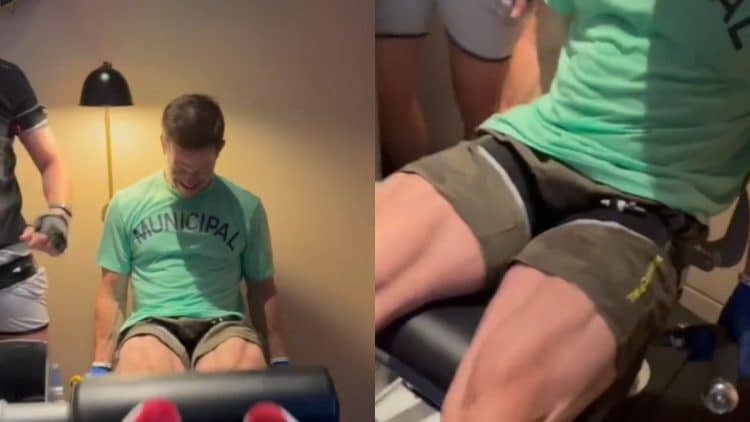 The multi-talented Mark Wahlberg is a magnet when it comes to entertaining the masses, whether it’s through music, television, or at the movie theatre. In a recent Instagram post, the 50-year-old Wahlberg can be seen trudging through a brutal set of leg extensions.

Mark Wahlberg acquired a big following in the early 1990s, mostly through a music group he helped create called Marky Mark and the Funky Bunch. The Massachusetts native parlayed his success in the music industry and found plenty of work as an aspiring television/film actor. His acting chops were quickly recognized in the 2000s, a time period that saw him participate in a number of marquee films. Wahlberg’s roles in The Perfect Storm, Planet of the Apes, and The Italian Job resulted in widespread notoriety, proving yet again, that he could conquer whatever he set his mind to.

In line with conquering challenges, the prolific actor was tasked with gaining a considerable amount of weight for his role in Father Stu. The role required Wahlberg to play a struggling boxer who decides to switch careers and become a priest. In preparation for the movie project, the 50-year-old revealed last year that he needed to gain over 30-pounds in a single month. This accomplishment was made possible by consuming over 7,000 calories a day. Wahlberg prides himself on transforming his physique depending on what a specific movie role demands.

In a recent Instagram video, The Uncharted actor demolished leg day by performing leg extensions. In the footage provided, Wahlberg is wearing blood flow restriction (BFR) straps at the top of his hamstrings to potentiate the pump he gets during the workout.

The concept of Blood Flow Restriction (BFR) refers to a training method involving partially restricting the arterial blood supply and completely restricting the venous supply to working muscles during physical activity. One important advantage offered by BFR is preventing muscle damage often caused by heavy lifting. As a result of BFR training, it can be easier and faster recovering from training sessions. These types of workouts have become quite common in Hollywood, with celebrities like UFC’s Conor McGregor and NBA’s Dwight Howard using them to great effect.

Blood flow restriction causes swelling and fatigue, which stimulates muscle growth. It also causes a buildup of metabolites, such as lactic acid, which forces the nervous system to recruit the largest muscle fibers.

The utility behind the workout comes from limiting the flow of blood and decreasing the amount of oxygen reaching the targeted muscle. By using tightened straps, muscles mimic blood flow during contractions, making it possible to achieve muscle growth without lifting too heavy. For more information on BFR/occlusion training, click here.

As of late, Wahlberg showed off his washboard abs on Cinco de Mayo last month. Since being virtually unrecognizable as Father Stu, it’s evident the movie star has gone to great lengths to recapture one of the most shredded builds in Hollywood.

RELATED: Mark Wahlberg Hitting A Most Muscular Pose While Showing Off Leaner Physique In Recent Update

Wahlberg is undoubtedly committed to physical fitness, and the size of his quads suggests that the actor has no intention of slowing down in the gym, even at the age of 50. ‘Marky Mark’ is the latest celebrity to use the BFR training technique, and by the looks of it, he’s already seeing results.