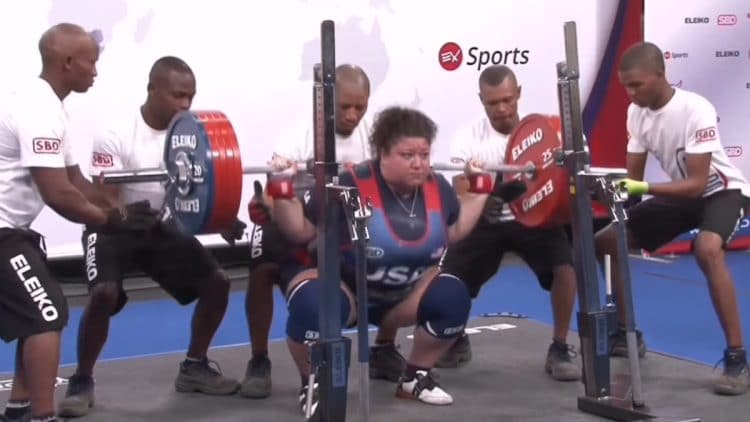 The 2022 IPF World Classic Powerlifting Championships were held in Sun City, South Africa, from June 6-12, 2022. It was action-packed from start to finish and Bonica Brown’s performance on the last day sealed it in the best way possible. Bionica entered and won the raw weight class of +84 kilograms. She also claimed two new IPF World Records.

Bonica Brown’s first IPF World Record of the day was in the squat event, as she squatted 273.5 kilograms (603 pounds). She also held the previous squat record of 273 kilograms (601.9 pounds), which she set at the 2018 IPF World Classic Powerlifting Championships.

Brown weighed in at 135.8 kilograms (299.4 pounds) for the 2022 IPF World Classic Powerlifting Championships. As the +84-kilogram weight class is the heaviest in the women’s division of IPF, all the athletes heavier than that compete in it. She won her division with a 21.5-kilogram (47.4-pound) lead over the second-place finisher. Bonica was also successful in all nine of her lifts.

Courtesy of GOOD LIFT! YouTube channel, You can watch all of Bonica Brown’s lifts here:

Bonica Brown has taken part in over 70 sanctioned competitions throughout her 19-year-long career. She was victorious in the majority of them, so the 2022 IPF World Classic Powerlifting Championships title is just another one for her. She also added another two World Records.

At 33-years-old, Bonica Brown is still one of the greatest powerlifters in the world, and plans to become even better. She is representing the USA in the greatest way possible and it seems like no one will take her throne in the foreseeable future.