Martyn Ford shows off his hands, three weeks into training camp to take on the Iranian Hulk, Sajad Gharibi 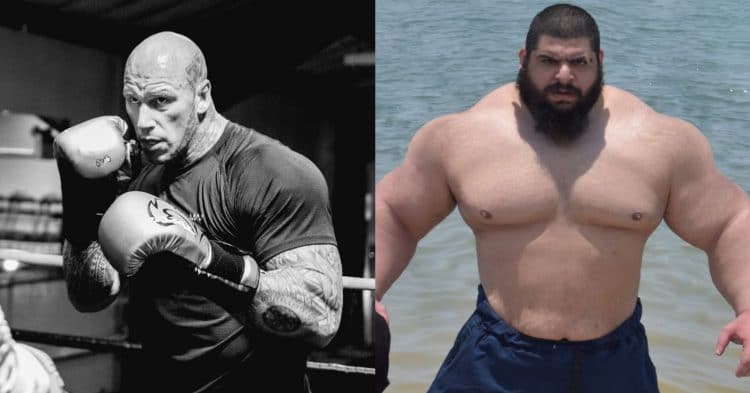 It was recently revealed that the Scariest Man on the Planet, Martyn Ford, would be taking on the Iranian Hulk, Sajad Gharibi in a boxing match. Three weeks into his training camp, and Martyn is already looking fairly agile and quick on his feet.

Ford is known for being the scariest man alive due to his staggering size and the fact that he sports a shaved head and a body covered in tattoos. Standing 6’9, and weighing upwards of 300lb, the bodybuilder, social media influencer, and actor is an absolute beast of a man.

Despite this size though, he seems to be fairly light on his feet, as his training kicks off for this massive boxing match years in the making. Posting to his Instagram, he shared a video of him hitting pads, and his hand speed and footwork is actually surprising given his size and lack of boxing experience.

“3 weeks in, working on ONLY boxing, so its been a eye opener for sure, and yes there are still many weaknesses …. HOWEVER I want to show PROGRESSION and I want to inspire people to go chase their dreams, no matter what it is …. NO ONE starts good, nothing is EASY ….. BUT with focus, hardwork and dedication … PROGRESSION is guaranteed,” Ford wrote.

“@boxfitcoaching making me push each session that little bit more. 5 months to go, and I am already more that convinced its an easy win against my pitiful opponent. BUT this training is NOT for him. Its for what lies after”

Martyn Ford vs Sajad Gharibi Tale of the Tape

This is the first time that Martyn Ford is going to be competing in boxing, but he has some experience training in MMA, doing Brazilian Jiu-Jitsu and general striking for that sport. It is clear that this is playing a part in his training for this fight.

Sajad Gharibi is also familiar with the world of MMA, with the two even initially being expected to fight in Polish MMA promotion KSW, a few years back. Now they are set to throw down in the boxing ring next April, and it promises to be an exciting sight to see.

As far as stats go, Ford is going to have a clear height and reach advantage, being 7 inches taller than Gharibi. However, the Iranian Hulk will have age on his size, being a decade younger than Martyn, as well as a weight advantage.

What do you make of this training footage from Martyn Ford? How do you see this fight between he and Sajad Gharibi going down?