There were surprises, predictable outcomes, and blooper roll moments from the 2020 Reebok CrossFit Games. We loved them all. 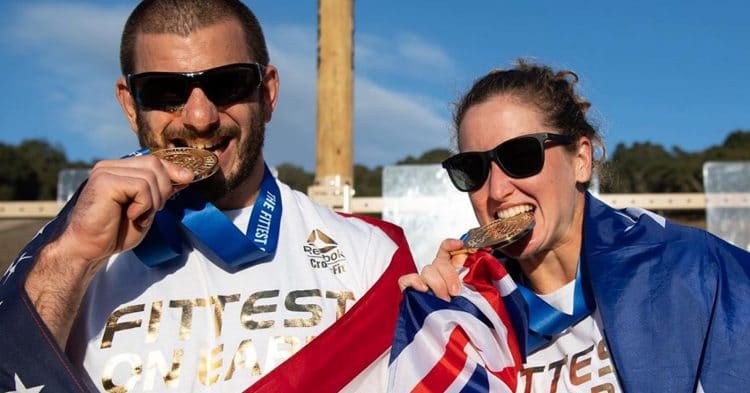 In the beginning, there were hundreds of thousands. From there, the top 30 men and 30 women rose to the challenge and competed in a virtual competition to earn their place in the finale. This weekend, only 10 remained. The final five in each division fought to prove themselves the Fittest on Earth. There was sweat, there were tears, and more than a little blood. At the end of it all, the victors became legends. They are the Fittest in History. The 2021 CrossFit Open starts Feb. 18. — #CrossFitGames #CrossFit #Fitness #Sports #FittestonEarth #Highlights #CrossFitTraining @crossfitaffiliates @crossfit Edited by Mariah Moore (@mariah.moore) Michael Dalton (@michaelishustle ) Michael Koslap (@mikekoslap ) Heber Cannon (@hebercannon) Marston Sawyer (@marzmedia ) Marcus Brown (@marcus_brown_) Corey Milne (@coreymilne ) @salvi.villanueva

Here are our favorite things we couldn’t help but notice.

1. What Happened to Noah Ohlsen?

Noah Ohlsen took second place in 2019, and it was almost expected that he would at least do the same this time around, if not beat the currently unbeatable Mat Fraser. He did neither of those things.

Was he sleepy? All weekend? Something was up here, as he was touted as being Fraser’s main competition for the 2020 Reebok CrossFit Games. By the end of Day Two, he had only 395 points out of a possible total of 900.

The Ranch Loop was a bit of a stumble for him on Day One, as it was for almost everybody, and the workout is not Ohlsen’s strong suit anyway. In Stage 1 of 2016, he finished 32 in the event and improved in this event for the 5K by placing third. But those that know him expected more.

In the toes-to-bar event, he stumbled and missed a lift, coming in fifth against newbie Justin Medeiros. By the end of it all, fifth and fourth place were his most common outcomes. Not great standing for someone that many were hoping would uncrown Mat Fraser. By the last event, Atalanta, he placed second to Mat Fraser, but it just wasn’t enough to make it to the podium.

Completely unexpected. But it does go to show how tough this year’s Games were for even the best of the best.

Noah Ohlsen wasn’t the only top tenner that blundered a little bit. We were quite surprised, and happily, that Brooke Wells was giving Tia a run for her money on occasion. Literally.

Brooke Wells came out high after day one. She was slow going during the 2007 Reload and the Corn Sack Sprint, coming in fifth after these events. But she crushed the Handstand Sprint in first place, finishing the day on a good note.

After that high, she lost her slipping during the 10K Ranch Loop when she took a wrong turn and winded up a whole seven minutes behind Kari Pearce who took fourth place at that event.

It’s her fifth run at the Games, so she knows what she has to do next year to hit the podium.
The girl has some strength. Her handstand work might just be better than anybody in the world. But she got psyched out and it cost her.

Who would have thought that this could happen? Not many. Medeiros was suspected as a possible podium finish, but second place, not really. For a first-timer, that’s a miracle in itself and something Mat Fraser should take seriously.

At the end of the weekend, he had rung up several top-three outcomes and he did not let Mat Fraser get into his head. During the grueling Ranch Loop, Medeiros held his own beside Fraser from beginning to end. Medeiros placed second here by just 30 seconds, which would definitely leave Fraser thinking about who his biggest concerns were this weekend.

It will be interesting to see where Medeiros’s career goes, he’s a promising athlete.

Anyone competing against Davidsdottir has to know that they have their work cut out for them. This Icelander’s mindset crushes all others, and you can just see the hunger for the win in her eyes. She knows what it tastes like too, as she’s taken the Fittest Woman on Earth® prize in both 2015 and 2016.

It wasn’t enough to win the crown again though, but she definitely worked for it. It was unexpected after Day One, as she finished fifth overall, but when it came to the Ranch Loop she told all of her contenders that she was there to hit the podium no matter what.

And she did. She finished the Ranch Loop six minutes ahead of Tia-Clair Toomey, her biggest competition. By the end of the weekend, six more top three outcomes and second in Atalanta secured her second-place win overall.

Whoops. This is one of those times when a true competitor turns a stumble into a win, and that’s what Haley Adams did during the Corn Sack Stumble. She finished fourth place overall but did well over the weekend bouncing all over the board.

But the Corn Sack Sprint was a challenge for her, and she gave up some points to her competitors because she couldn’t handle the sack very well. She was the only one that couldn’t quite get a grip on it throughout the event and had to keep changing how she held it.

Even so, she still managed to snag a third-place finish, but that’s going to get in your head when you are running behind the likes of Davidsdottir and Toomey.

Even with a stumble she did well as the youngest woman there.

6. Jeffrey Adler is a Nice Person

So this is no surprise, that Canada’s finest athlete proved himself a lot during the games, in both athletic prowess and sportsmanship. Jeffrey Adler of Canada came into the games as Fittest in Canada, and he showed Mat Fraser he was there to place, and he showed Fraser that all weekend long.

Competition is over. It went by so fast and I will have those memories forever. I will give everything more thought in the next few days. For now congrats to all the competitors, and to the podium finishers! Thanks to Crossfit for hosting and having a great team of volunteers. Thanks to all the people that supported me this year! I am taking a few days off and then back to work! • 📷 @crossfitgames #crossfit #crossfitgames @gowod_mobilityfirst @nxtgphysio @timebirdstimers @sharkletics @crossfitwonderland

It was a consistent effort on his part as he beat Fraser by seven pounds in the CrossFit Total, due to a miscalculation on Fraser’s part. It showed that Adler got in Fraser’s head, and he should have.

But even when Adler lost the Bike Repeater to Fraser by literally two seconds, Adler gave Fraser a friendly slap on the back after and showed that he can compete, and he’s a nice person as well.
Awwww.

For some, this is the biggest story of them all. Not only did Jeffrey Adler beat Mat Fraser during at least one event this weekend, so did Kari Pearce.

She made history with that stat, and she also made history as getting an American on the podium after a little bit of a dry spell.

She is awesome. That is all.

8. The Most Expected Moment of Them All.

It may have been the most expected when Tia and Mat took home the Fittest on Earth® titles again, but it’s still impressive.

We have a five-time winner now for Mat Fraser and a four-time winner for Tia-Clair Toomey. These are all-star athletes that don’t let anybody get in their head. Much. Winning, winning, won. Fraser won 10 of 12 events, and Tia took nine of them.

It was expected but we are still in shock by their consistency. They aren’t giving it up any time soon.