Natural bodybuilder Mike O'Hearn linked up with NFL analyst Heath Evans to train arms with a variety of workouts. 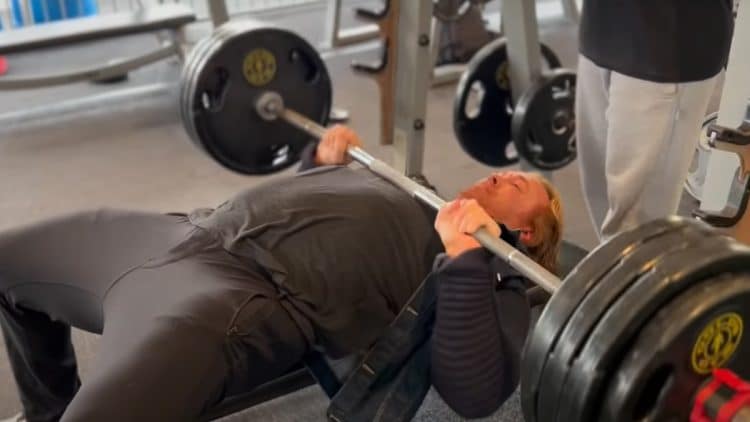 Recognized for his longevity and aesthetic physique, Mike O’Hearn is a dominant force in fitness and bodybuilding. In a recent YouTube video, O’Hearn hit a brutal arm workout, which included a close grip bench press of 385lbs for a staggering 10 reps.

Mike is known for his efforts in bodybuilding, powerlifting, strongman, acting, and modeling. He made an appearance in the original TV series, American Gladiators where he played the roles of Thor and Titan from 1989-to 1996. He also took part in the 2008 revival of the show. Mike is a personal trainer and has been featured on the front cover of countless magazines. O’Hearn reached the top of the fitness mountain during his time competing as a natural bodybuilder.

O’Hearn won the Mr. Universe title a total of four times. As of late, he has remained in the limelight for his ability to keep up with his impressive physique. In fact, his build has ignited discussions about whether his physique is natural or not. Nevertheless, his dedication to working out is prevalent in his collaborations. O’Hearn has trained alongside three-time Mr. Olympia Frank Zane. Back in Feb., the two linked up and discussed unorthodox techniques that no one is practicing today.

During his most recent collaboration, O’Hearn worked out with NFL Network analyst Heath Evans, and the two ran through an extensive series of arm workouts.

In a recent video published on his YouTube channel, Mike O’Hearn and Heath Evans train arms and Mike began the session by bench pressing 385lbs.

Below you can find the workouts that Mike O’Hearn and Heath Evans utilized.

The group begins their arm-day session with a close grip bench press aimed at improving the triceps. Mike starts with 10 reps of 385lbs in rapid succession. After O’Hearn is done with that set, Evans hopped on the bench press for a total of five reps.

After resting, Heath follows it up with three more reps. Next, Mike returns to fire off another 5 reps. Following Mike’s set, Heath manages his movement with adequate control and hits 5 additional reps.

Following the bench press, the group moved to lying barbell extensions which are also known as skull crushers. The movement provides the lifter with a significant stretch in the triceps. Overcoming the weight load from an extended position can result in more muscle stimulation as well. However, inadequate warm-ups can cause elbow pain or discomfort so it’s essential to practice using the proper technique.

Heath hits four reps to start off. Mike follows up Heath with six reps but pauses on his first. Mike then finishes off the workout with 15 reps of lighter weight. Afterward, Heath returns for another 3 reps before Mike finishes with 9 more reps.

Moving on to neutral-grip barbell curls, the two get to work on training the upper arm muscles. Mike starts the routine with 5 reps until Heath takes over and hits a number of repetitions. Given Mike O’Hearn’s physique at 53 years old, clearly, these methods are having a positive impact on his health and fitness level.

The workouts were insightful, and fans got the opportunity to see Mike O’Hearn’s insane pressing strength. After working out with NFL analyst Heath Evans, it appears Mike O’Hearn isn’t slowing down one bit.