Mike Tyson was fed-up with a reportedly intoxicated passenger who would not stop bothering him. 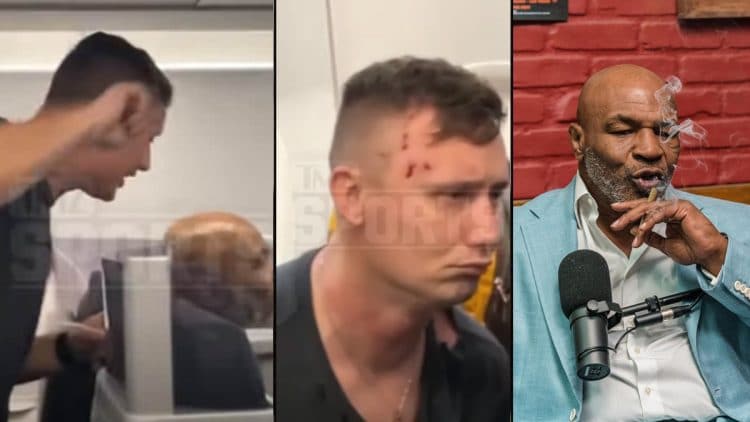 It is reported that the former boxing heavyweight champion of the world, Mike Tyson, has fiercely beaten up a passenger on his flight from San Francisco to Florida. Mike had a troublesome past and made it a well-known fact that he is someone you might not want to provoke. Despite becoming more mellow as he gets older, Tyson can still get angry. As per TMZ, Mike punched a passenger in the face on a plane after he bothered him.

In the video that was shared on the Internet, the person who has been reported to be intoxicated is seen leaning over Mike Tyson’s seat and trying to speak to him. Apparently, his talking was not all friendly, as some sources explain that he was even provoking Tyson. Mike ended up giving him a verbal warning, but he did not stop.

Mike Tyson then turned to physical contact to solve the situation, and can be seen repeatedly landing multiple powerful punches on the victim. This altercation left the man with a few cuts and a bloody face. Tyson went off the plane a few seconds after the incident.

Related: Mike Tyson Tosses Steel Cage Like A Toy In Photo Shoot On The Beach

According to TMZ Sports, Mike Tyson’s representatives have released a statement regarding the incident.

“Unfortunately, Mr. Tyson had an incident on a flight with an aggressive passenger who began harassing him, and threw a water bottle at him while he was in his seat,” stated Tyson’s representatives as per TMZ Sports.

The man who was attacked by Mike Tyson received quick medical attention and is said to have gone to the police regarding this case. It is definitely clear that he probably couldn’t have been beaten up by a more dangerous man than Mike Tyson, a self-professed “Baddest Man On The Planet”.

Mike Tyson had a very successful boxing career, winning his first 37 matches, and ending up with a record of 50-6. He also managed to knock out 44 of his opponents, so it is evident that his punches can cause some major damage. Tyson retired from boxing in 2005, but got back into shape for his exhibition bout against Roy Jones Jr., which resulted in a draw. Recently, there has been some talk about his fight against one of the Paul brothers, but that does not seem too likely. Mike is currently the owner of a weed farm and a line of edibles, so he is leading a very successful life.

This is not the first time that Mike Tyson has gotten into trouble outside the boxing ring. His most notable incident was the rape conviction, which left him behind bars from 1992 to 1995. Apart from that, Mike has had a rough childhood and stated numerous times that he had been arrested a staggering 38 times by the age of only 13-years-old.

Mike Tyson was also involved in one of the most famous boxing incidents in the history of the sport. That was when he bit the ear of Evander Holyfield and lost the fight by disqualification.

You can watch some of the best Mike Tyson KO’s here:

Mike Tyson was a short-tempered man throughout the majority of his career, but has gotten a lot better and more patient in the last few years. He has opened up multiple times on his YouTube podcast and explained that the “beast” is still in him and that he is fighting to contain it. It seems like that beast came out, and it did not go well for his victim.

Tyson is scheduled to speak at the Benzinga Cannabis Capital Conference Afterparty at LIV in Miami on Thursday evening around 8 PM ET, despite beating up a passenger in an altercation on a plane from San Francisco to Florida on Wednesday night.