"The Mutant" is back in the gym and looks to be getting bigger and stronger as he continues offseason improvements for 2022 Mr. Olympia. 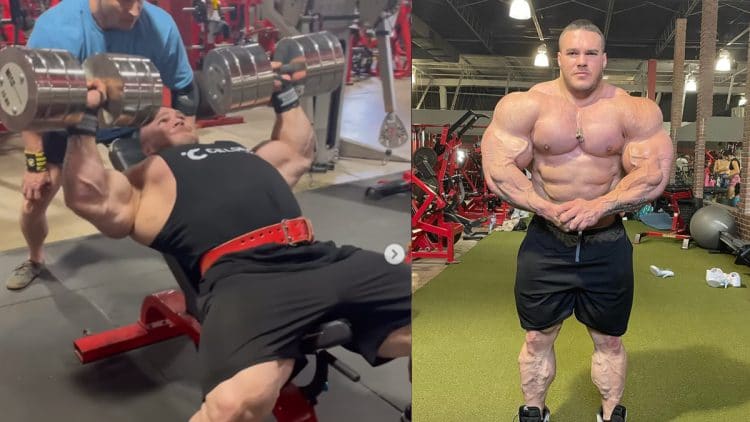 IFBB Pro bodybuilder Nick Walker is pushing his body to the limit in the offseason to improve his physique for 2022 Mr. Olympia this Dec. In a recent training video on Instagram, Walker hits 185 lb incline dumbbell presses for 10 reps.

The 27-year-old started his Pro career in bodybuilding with a fourth-place finish at the 2020 Chicago Pro. Nick Walker exploded in popularity after leading a historic rookie season with coach Matt Jansen the following year. In 2021, Nick took first place at the New York Pro. Following the show, he promised he would bring an undeniable physique to the 2021 Arnold Classic and did so, winning first place as he predicted. He claimed victory at both of these contests within one year of earning his Pro card.

Impressively, Nick rode the momentum into 2021 Mr. Olympia where he took fifth place in his debut at the prestigious event. Walker has admitted that he was taking time away from competing, including at the 2022 Arnold Classic, to work on his physique and bring a better package to the upcoming Mr. Olympia show this Dec.

Routinely sharing his workouts on social media, Nick isn’t shy about showing the steady improvements he’s made outside of competition. He’s continued to build muscle mass in the offseason and has achieved an insane V-taper while still managing to keep his waist tight. Nick is very thorough in his approach to bodybuilding and goes to great lengths to makes sure his conditioning is always on point each time he enters a show.

In a recent Instagram video, Nick Walker shared a workout where he locked 185 lb incline dumbbell presses for 10 reps. In addition, Walker can be seen in the next clip performing face away low cable biceps curls for 11 reps.

The primary muscles targeted during incline dumbbell presses include:

In the second clip, Nick utilizes face away low cable biceps which target his biceps.

“Chest and biceps today
Worked up to a top set of 185 incline db press for 10 reps!!!
Strength is rising quickly.” Nick Walker posted.

While Nick has a preference for machines, he’s been utilizing free weights as of late to build muscle mass. Previously, Walker shared a brutal workout session consisting of 150 lb shoulder presses for 13 reps. With 2022 Olympia on his radar, Nick has been working with dietician and coach, Dom Supersliced, real name Dominick Mutascio in preparation for the big show. Nick issued a physique update after getting his chest and bicep pump in.

Nick is always focused on improvements and ultimately bringing a better package to the upcoming Olympia event. While he used to have a rivalry with fellow IFBB Pro Blessing Awodibu at the beginning of his career, they have since buried the hatchet and begun working together. The two have helped each other make adjustments to further their respective careers.

With jaw-dropping size and insane conditioning, it will be interesting to see how Walker’s physique compares to many of the other competitors looking to make a statement. After Hunter Labrada took fourth place ahead of Walker at last year’s Olympia, many fans are counting down the days until Nick and Hunter face off in Dec.

RELATED: Nick Walker Shares His Grueling Shoulders And Triceps Workout As He Prepares For 2022 Olympia

Judging by his recent workouts, Nick is remaining as busy as possible during offseason. After hitting 185 lb incline dumbbell presses for 10 reps, Walker continues to push his physical limits in preparation for 2022 Mr. Olympia.