Eat and train like "The Animal Unleashed" to get in the best shape of your life. 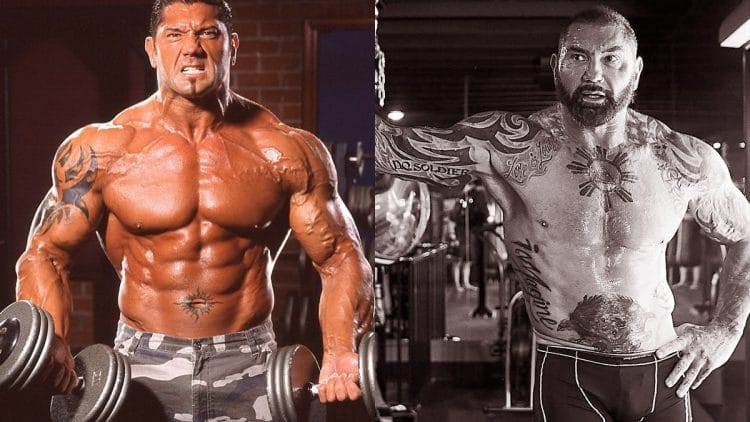 Dave Bautista, also known as Dave Batista or his ring name Batista, is an American actor and former professional wrestler, mixed martial artist, and bodybuilding aficionado. If you are a 90s kid, you have probably grown-up watching “The Animal Unleashed” on WWE. His swanky tattoos and jacked physique made him a crowd favorite.

After leaving WWE, Bautista earned a purple belt in Brazilian jiu-jitsu under the tutelage of Cesar Gracie. In Oct. 2012, Bautista defeated Vince Lucero via technical knockout in the first round to win his lone MMA fight.

In this article, we will go over the Batista Bomb-delivering wrestler’s diet and training program so you can build a physique just like him.

Born on Jan. 18, 1969, in Washington D.C, Bautista revealed that he grew up in poverty. He was a nightclub bouncer until he was arrested due to his engagement in a fight that left two people injured, one of whom was rendered unconscious.

“I don’t take this lightly when I say this but bodybuilding saved my life,” said Bautista in a sit-down with Olympia President Dan Solomon for a YouTube video. He is known for his support of pro bodybuilding and often attends the biggest bodybuilding competition, the prestigious Mr. Olympia.

“I was in a lot of trouble, getting in the worst kind of trouble and hanging out with the worst kinds of people. I just didn’t have anywhere to focus and channel all my anger and aggression. And when I found a gym, it just became therapeutic for me.”

Although Bautista is no longer a professional wrestler, he leaves no stoned unturned in his diet and training program to maintain his monster physique.

When it comes to his fitness, Bautista doesn’t fool around. He works with the best in the business to stay ripped throughout the year. For his role in Guardians of the Galaxy, the former WWE star tapped Joe Bennett, also known as Hypertrophy Coach, to help him with his transformation.

At the time of this article’s publication, Bennett is working with two-time Arnold Classic Classic Physique champion Terrence Ruffin, who has his eyes set on winning his first Classic Physique Olympia title at the 2022 Olympia weekend scheduled for Dec. 16-18 in Las Vegas, NV.

Batista cut out red meat and pork from his diet in 2010 and no longer eats poultry. He’s presently meat and dairy-free and now follows a mostly plant-based diet. However, he eats fish a couple of times a month to ensure he doesn’t lose any muscle mass. Eventually, Bautista wants to go vegan.

“I eat as clean as possible. I do vegan protein powder. I was eating mostly vegan, except for eggs. I couldn’t give them up for breakfast.”

The WWE star has never revealed his exact vegan diet. The diet you see below has been piled together after breaking down his interviews and social media posts.

Bautista’s regular meals include rice and beans, fish (twice a week), and eggs for breakfast. He has chronic asthma and has eliminated dairy products from his diet since 2005.

Notably, since plant-based meals can be hard to put together, the actor uses meal prep services to meet his dietary requirements while on shoots.

In one of his interviews, Bautista revealed that he is contractually obligated to eat no less than every four hours to maintain his muscular look. “In between those meals if I get hungry, I typically do an almond butter and banana, or a vegan, gluten-free grilled cheese is my favorite go-to,” he says.

Bautista’s Diet Before He Went Plant-Based

When Batista is not entirely plant-based, the staples in his diet include fatty fish, lean chicken, eggs, spinach, greens, vegetables, potatoes, and oats. His conventional diet includes:

“I play with my diet a lot. During the day, I am all protein and fats. And then at night, I’ll usually have one very low-carb meal. But I change things up depending on what I’m preparing for.”

Bautista is not your typical gym bro. The Hollywood star has an elaborate home gym and has two separate floors dedicated to weight training and martial arts practice.

Per Bautista, he followed the most intense training regimen to get in shape for his role as Drax the Destroyer in the Marvel movies.

“You probably noticed that I am the only Marvel character who is shirtless in every film. Even when I am in outer space, I am shirtless.”

With Drax always being shirtless in the Marvel movies, there’s no room for Bautista to hide any body fat, which keeps him motivated and laser-focused on getting in a better shape.

Bautista follows a six-day-a-week training routine and trains each muscle group twice a week. Below is what his training regimen looks like —

The former wrestler trains twice a day in his gym, and his training routine includes weight training, cardio, and martial arts. Because of his training and diet regimens, Bautista could easily be mistaken for a bodybuilder.

“Dave is amazing at putting on muscle,” Joe Bennett says. “There were a few exercises that we needed to introduce to his workouts, to diversify, and there were a few that he was already well on top of. Right now we have been focusing a lot on building up his legs”

Dave Bautista uses three days on and one day off training split — meaning he takes a rest day after days three and seven of his training routine.

Use your rest days to perform soft tissue work (SMR) and light recovery walks to get the blood flowing to your muscles to help promote recovery. If you are trying to lose weight while building muscle, you could perform a 30-minute LISS (low-intensity steady state) cardio session to boost your fat-loss process and keep your metabolism kicking through the day.

If you think you need to bust it out on a treadmill to lose weight, think again. A study suggests there is no real advantage to doing very high-intensity training compared with steady-state cardio. [1]

Related: Calories Burned While Resting and Doing Nothing Calculator

On some days, Joe Bennett puts “The Animal Unleashed” on a circuit training routine. Below is Bautista’s leg training circuit routine —

Complete between 1-3 sets, with one-minute rest between rounds. Keep the weight light.

Complete six sets, with 90 seconds rest between each.

Complete four sets, with 90 seconds rest between supersets. The last working set is a drop set.

Here are the supplements Dave Bautista relies on to meet his daily micro and macronutrient requirements:

If you are a beginner or intermediate lifter, you don’t need all the ten supplements mentioned above. Feel free to choose the ones that make the most sense to you and make them an indispensable part of your fitness regimen.

From stealing cars at the age of 13 to becoming one of the biggest stars in Hollywood, Dave Bautista has come a long way. Whether fighting the bad guys in WWE or standing in support of the BLM movement, the actor continues to be an inspiration for his followers.

Dave Bautista has dominated multiple careers while maintaining an incredible physique, and his diet and training program can help you do the same.