Zach Merkel had a close call but he's recovering nicely after a successful procedure. 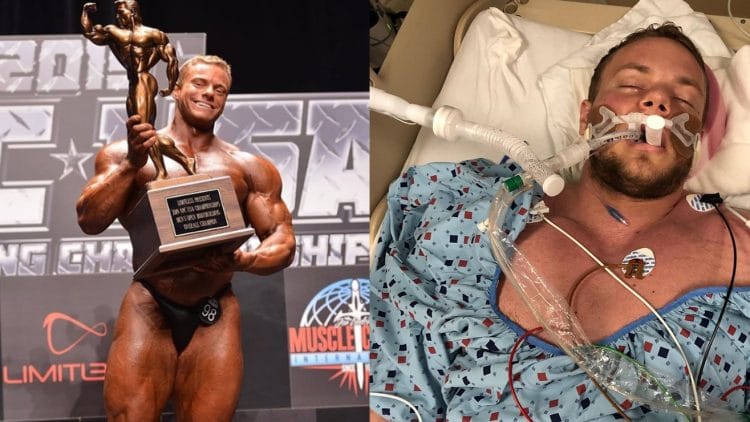 Health is something we can never take for granted seeing as how precious life truly is. Well, 2019 Mr. USA champion Zach Merkel had a rather close call around Christmas time which turned out to be the most traumatic event in his life, as he explained in a recent Instagram post which accompanied a photo of him lying in a hospital bed.

Merkel had been suffering from two rare defects in his heart’s electrical system which were present since birth. However, he was unaware of this issue until he started to feel dizzy, short of breath, and experienced an abnormal heart rate of which he then took it upon himself to get it checked out.

And thank goodness he did because it likely would have been fatal to carry on with his daily life and ignore the symptoms. But he apparently no longer has to worry about the heart defects after a successful procedure and he took to Instagram to explain the series of events while expressing his gratitude for the support of family and friends, and coming out of this scary situation alive with his health.

“Last week was hands down the most traumatic week of my life. Starting around Christmas time I began to feel dizzy, short of breath, and experienced a persisting rapid heart rate both in and out of the gym.. It showed no signs of getting better so I said enough was enough and went to my local hospital last Tuesday night to get looked at.

They kept me overnight and Wednesday evening my heart went into supraventricular tachycardia and reached 260bpm which can be lethal so I was life flighted to UPMC in Pittsburgh. Once there they determined I had two rare defects in my hearts electrical system (WPW and AVNRT) that were present since birth and had just begun to display symptoms.. The doctors performed 2 catheter ablations where they go in through veins in my groin up into the heart and burn out the extra “shortcut” nerve pathways that caused the arrhythmia.

Unfortunately during the first procedure I developed pulmonary edema (fluid in my right lung) so I had to have a breathing tube put in and remain sedated for almost 72 hours but this was just another road bump as the procedures were successful. I recovered just fine and I was released this Monday evening and have been doing well since.. The doctors confirmed that this was a very rare case involving two heart defects present at birth (which I no longer have to worry about) and that my heart is actually functioning stronger than it was in my 2016 EKG/EchoCardiogram records.

That said I’ll be back in the gym in less than two weeks training again once I’ve fully recovered from my surgeries and the coinciding complications. Sorry to keep everyone on IG in the dark but I had to.. And Thankyou to my family and friends who supported me through this, visited me, sent prayers, and well wishes, you guys are the best and I love you. I literally can’t wait to be pumping iron once again and pushing for MASS.

The main reason I’m posting this is to show you how important it is to seek medical attention if you feel that something’s wrong! Had I ignored my instincts and not gotten looked at I may not be here to preach to you guys how important it is to listen to your body! (First 2 pics Friday, 3rd Monday upon release)“

He explained that the main reason he shared his story was to show just important it is to listen to your body when you feel that something is wrong and if he had not taken action then he may not have been here to preach about it.

Zach Merkel plans to hit the iron as soon as possible with the goal of gaining more mass and we wish him a speedy recovery so that he can continue to kick butt while doing what he loves.

Rory McKernan Has Decided To Make The Switch To NOBULL