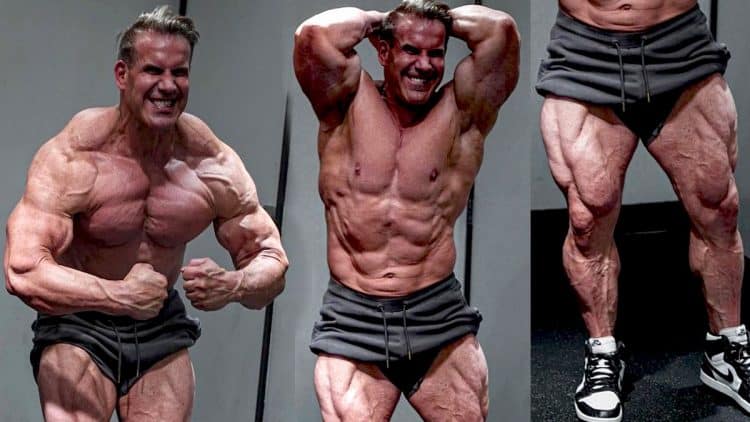 Bodybuilding legend Jay Cutler is killin’ it at 49 years of age. The four-time Mr. Olympia winner is looking absolutely ripped in his recent Physique update. Jay Cutler is best known for his fierce competitive rivalry against Ronnie Coleman that ended in Cutler beating Coleman at the 2006 Mr. Olympia. He then went on to win the Sandow trophy three more times in 2007, 2009, and 2010.

Cutler became famous for his quad stomp, which helped him inscribe his name in the annals of bodybuilding. It had never been achieved by any other athlete to finish first at the Olympia after slipping down the rankings. It was Cutler’s stomp that gave him the victory over Jackson and his fellow competitor Branch Warren in 2009.

A decade after his retirement from bodybuilding, Cutler continues to train hard and stay in shape all year round. However, he has taken a smart approach and controlled the intensity of training and gear use to focus on long-term health.

The four-time Mr. Olympia winner routinely interacts with the younger generation of bodybuilders to keep himself updated with the sport’s progression and share his wisdom as well. Cutler transitioned well into the age of social media as he remains one of the most recognized names of his generation and a prominent voice in the sport of bodybuilding.

Even in retirement, Jay Cutler keeps track of competitive bodybuilding with a keen eye. Besides talking about the sport’s development, he offered tips to competitors to improve their physique for the contests. Recently, Jay Cutler shared his opinion on the 2022 Olympia lineup. While up-and-comers like Nick Walker, Hunter Labrada, Andrew Jacked, and Michal Krizo have a lot of hype around their name, elite competitors like Brandon Curry and William Bonac are relatively ignored in the process. Cutler warned not to underestimate the proven veterans.

Jay Cutler shows off ripped Physique in a recent update

In one of the recent social media posts, Jay Cutler showed off his impeccable physique where the muscle definition and proportions grabbed the attention. You can see the post here, courtesy of Fitness Volt Network’s Instagram handle:

Competitive bodybuilding is an extremely demanding sport that has taken its toll on a lot of bodybuilders, especially toward the later stages of their careers. Jay Cutler is one of the elite bodybuilders that took an extremely cautious and mindful approach. This helped him retire from the sport without any serious injuries or health issues.

An impeccable massive Physique is a primary identity of competitive bodybuilders throughout their careers. It is a psychological challenge for many to shed those extra pounds even if it is in the interest of their long-term health. Bodybuilders like Jay Cutler, Dorian Yates, and Dexter Jackson have significantly downsized post-retirement and set a positive example for young bodybuilders to follow.

During an interview earlier this year, Mr. Olympia President Jake Wood confirmed the return of the Masters Olympia in 2023.

In 1994, Robby Robinson won the first Masters Olympia. In 2003, the Masters Olympia was discontinued for eight years. Over the years, various Masters competitions have been held, however, the Olympia contest did not return until 2012 in Miami. Dexter Jackson, the 2008 Mr. Olympia, dominated the contest and took first place, which was the last contest until now.

If the Masters Olympia makes a return in 2023 or in the future, there is no doubt that a number of athletes will be able to put up an impressive performance. Until then, it is merely a matter of waiting.

Even though Cutler has retired and has no intention of making a competitive return to the game, it is evident from his looks that he would be an excellent candidate for the Masters Olympia but it’s too early to tell if Jay will return to the stage.

The success of Cutler in the Men’s Open bodybuilding division made him one of the most famous bodybuilders of all time alongside eight-time Mr. Olympia champion Ronnie Coleman.

Lemon Water and Fasting: Everything You Need To Know