The reigning champ Mamdouh "Big Ramy" Elssbiay appeared to have been sidelined at the 2022 Olympia. 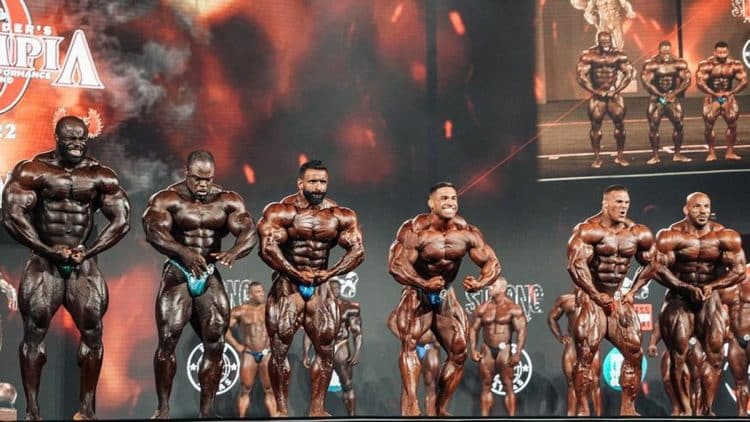 The 58th Joe Weider’s Olympia Fitness & Performance Weekend is underway at Planet Hollywood Resort & Casino in Las Vegas, NV. Although the premier bodybuilding show hosts 11 contests, the Mr. Olympia Men’s Open division is undoubtedly the most popular in the competition.

Elite pro bodybuilders compete at the Mr. Olympia contest to earn the bragging rights to call themselves the best Open division bodybuilder in the world.

The 2022 Mr. Olympia contest is arguably the most intense battle for the elusive Sandow trophy in a long time. The 58th edition of the show has 30 Men’s Open bodybuilders competing for the $400,000 prize money and the sport’s highest honor compared to 16 from last year.

While the reigning, defending, and two-time Mr. Olympia champ Big Ramy was the favorite to win his third O title going into the show, the tables seem to have turned after the pre-judging round.

The Story of the 2022 Mr. Olympia Pre-Judging Round

Big Ramy is wearing the number “30” at the 2022 Mr. Olympia showdown. While we can’t be sure if it was by design or luck, British bodybuilder Samson Dauda got the number “29”.

In the group posing round, the British bodybuilder matched the 300+ pound reigning O champ pose-for-pose and left the fans and experts awe-struck.

Things didn’t end there. Dauda was also in the first callout along with Hadi Choopan, Derek Lunsford, Nick Walker, Brandon Curry, and Big Ramy, which is an achievement in itself since this is the Brit’s debut Olympia appearance.

At the same time, it was the beginning of Big Ramy’s rough ride at the pre-judging round. Judges placed the two-time Mr. Olympia champ on the extreme right and hardly moved him throughout the mandatory posing round. On the other hand, the judges gave every other Sandow trophy contender a chance to stand next to the Egyptian bodybuilder.

Notably, 2021 212 Olympia champ Lunsford and 2021 Men’s Open third-place finisher Hadi Choopan enjoyed the longest time at the center of the first callout lineup. Although where bodybuilders stand during the callouts doesn’t dictate their final placings, the center position on the red line usually signals that judges like what they see. 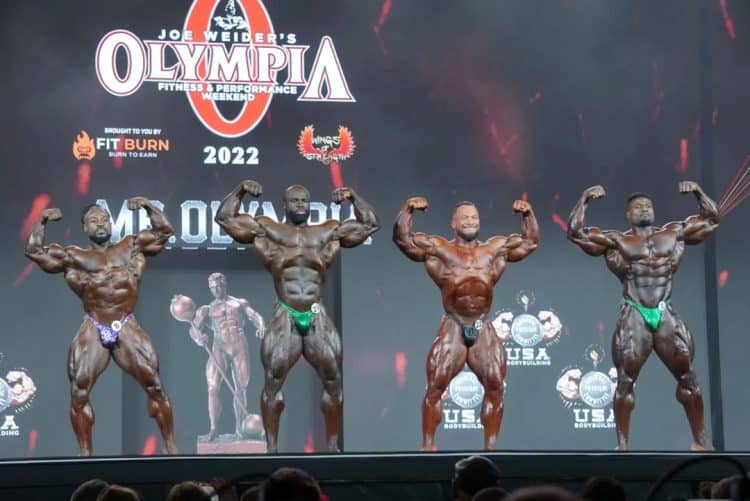 Lunsford applied for a special invite to the Open division after he stepped on stage with the big boys at the 2022 Pittsburgh Pro for a guest posing routine to fill in for Big Ramy, who was missing in action. Fans and experts alike believed that Lunsford gave the Open competitors Walker, Labrada, and Curry a run for their money during the guest posing routine. This sparked a debate if Lunsford should move to the Open division, which he ultimately did.

It is the first time a former 212 Olympia champ received the first callout after switching to the Olympia Open division. On a side note, Big Ramy would probably be regretting missing the 2022 Pittsburgh Pro after returning to his hotel room from the 2022 Olympia pre-judging round.

On the other hand, Choopan has been a Mr. Olympia frontrunner since he made his debut at the most prestigious bodybuilding show in 2019. He placed third at the 2019 Olympia, fourth at the 2020 Olympia, and regained his lost spot at the 2021 Olympia.

Interestingly, Lunsford and Choopan are coached by “The Pro Creator,” Hany Rambod. 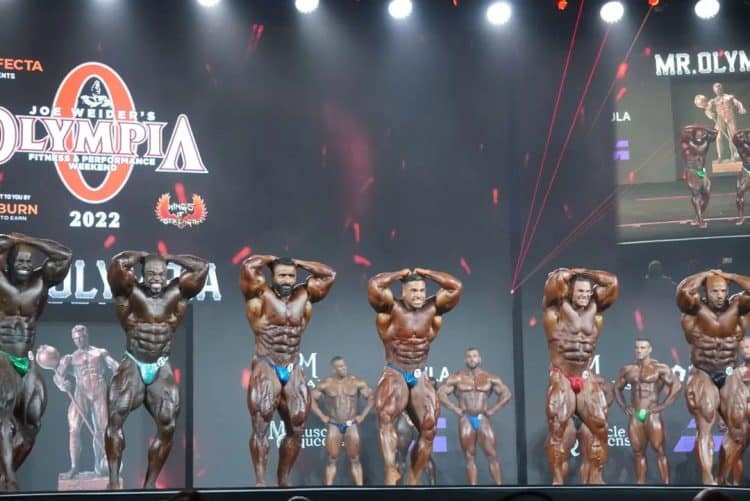 After multiple comparisons and rundowns, the Olympia judges asked for the same bodybuilders from the first callout to be in the final callout, confirming that these six bodybuilders are the frontrunner for the coveted Sandow trophy.

These six elite bodybuilders include:

Big Ramy faced the same fate in the final callout and was kept at the extreme right corner for most of the mandatory posing session. However, Lunsford’s crazy X-frame wowed the spectators. His broad shoulders, tiny waist, and sprawling quad sweeps earned non-stop praise from Olympia commentators. 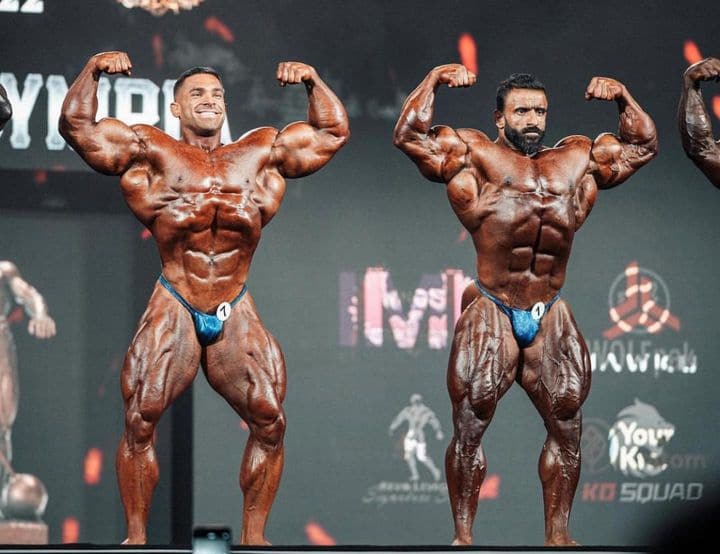 The 2019 Olympia champ Curry started strong but arguably faded during the long and intense final callout.

The surprise entrant Dauda can upset many bodybuilders in the Olympia top lineup come showtime on Dec. 17.

Catching Up the King

Big Ramy won his maiden Mr. Olympia title in 2020 on a special invite since he couldn’t qualify for the Super Bowl of Bodybuilding due to Covid-19 restrictions. Big Ramy showed up in the best shape of his life and outsized the reigning champ Curry to hoist the Sandow trophy.

Big Ramy changed the game by winning the 2020 Olympia title. He took the mass monster era to the next level. He was able to hold onto his throne in 2021 as no other bodybuilder could match up to his size.

However, two years have passed since Big Ramy won his maiden Olympia title, and two years is enough time for bodybuilders to gain substantial muscle size and definition.

Although Lunsford and Choopan are nowhere near 300 pounds, the relatively short competitors pack dense muscle mass on their frames. Dauda and Walker matched Big Ramy pose-for-pose on the 2022 Olympia stage. Meaning, the dominant 300-pound two-time champ is dominant no more, and the 2022 Olympia throne is anyone’s for the taking after the pre-judging round.

The Olympia Men’s Open is a two-day event, and an athlete’s physique can change considerably on the second day. The two-day event allows competitors to adjust their water, sodium, and carbs to dial in their physiques and tie up the loose ends.

Winter seems to have arrived early in Vegas, but the question is, can the reigning champ handle the cold, or will Choopan’s and Lunsford’s starking physiques put the dagger in the Night King’s heart?

The finals begin on Dec. 17 at the Zappos Theater (Planet Hollywood Resort & Casino) at 7 pm PST (10 pm EST). Fans are eager to see if Big Ramy can grab his third consecutive Olympia title or if a new champ will be crowned at the 58th edition of the show.