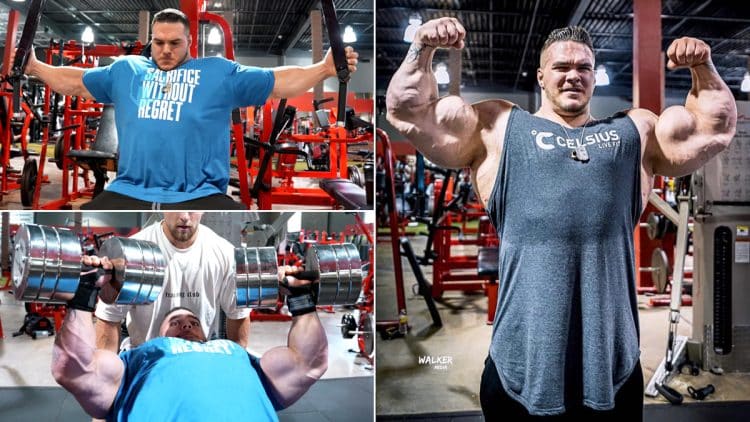 All bodybuilders are gearing up for the 2022 Olympia, and 2021 Arnold Classic Champion Nick Walker is right on schedule.

Walker showed last year that his competitiveness isn’t to be underestimated in the Men’s Open division. After winning the 2021 New York Pro, he pushed his physique to a whole new level to win the 2021 Arnold Classic.

During his Olympia debut in 2021, he earned a humble fifth-place finish, which isn’t bad for a first attempt. Walker plans to return with an impressive physique this year. He wanted to begin his prep the previous week, but unfortunately, he was down with a stomach infection.

Now, he’s back in the gym with pent-up motivation and the burning desire to win gold at the 2022 Olympia. In a video recently uploaded to his YouTube channel, Walker demonstrated a series of exercises, where he mainly focused on a chest workout with some tricep and shoulder exercises along with bodybuilding coach Brandon Long.

“I like to typically start with a flye. Just get a good stretch, get a good contraction. Really pumps up the chest and it also gets you ready for the heavy compound movements we’re going to do next. This is the way to help prevent injury as well.”

He concluded this exercise with a drop set for his last set.

In their first compound movement from the chest routine, Nick and Brandon Long performed an incline dumbbell chest press.  Walker believes that dumbbell pressing exercises are beneficial because they ensure equal development of the muscles on each side of the body, resulting in a larger chest in his opinion.

Brandon Long pumped up Nick Walker as the latter hit a heavy set, “Come on, big squeeze. Come on Nick, get it, get another.”

The bodybuilder moved to his shoulders following the heavy compound chest exercises. He focused on his side deltoids with heavy resistance.

Nick inserted a shoulder exercise during the chest workout to give the pectoral muscles some rest.

In this shoulder movement, the deltoids are stretched, helping to develop capped shoulders.

Brandon and Nick continue their chest routine after a small detour.

Nick walker started the exercise with straight sets but finished off with an intense drop set.

Following the chest routine, Walker and Brandon Long worked on the triceps. The exercise began with rope pushdowns.

A machine dip was the next exercise on the triceps routine.

2022 Olympia is scheduled for Dec. 15-18, 2022 in Las Vegas, Nevada. Throughout the prep, Walker’s coach will be with him in person to adjust, modify, and make sure that he looks his best.

It is going to be a tough competition for Nick Walker at Olympia since he will face Hunter Labrada, who finished fourth at Olympia 2021, and Mamdouh “Big Ramy” Elssbiay, the two-time reigning champion.