The 2021 Arnold Classic champion Nick Walker crushes a day in the gym after working his delts and triceps. 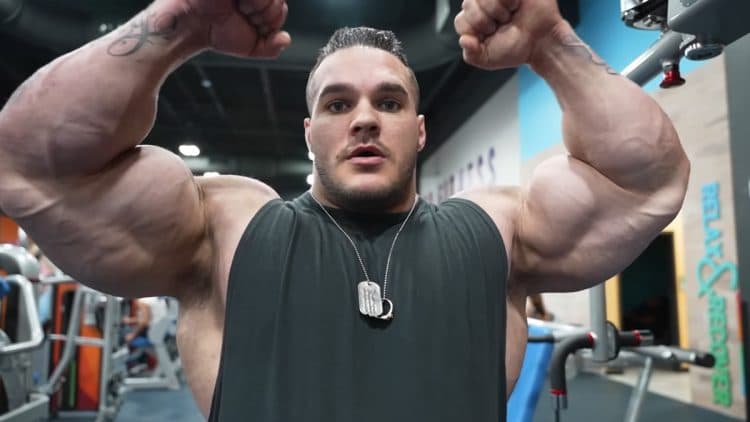 Remaining active in the offseason, Nick Walker continues to improve his physique with his eyes solely focused on the Mr. Olympia show later this year. “The Mutant” recently got a killer pump in while sharing a delt and triceps workout on his YouTube channel.

There are few bodybuilders, if any, with the type of hype and momentum that Nick Walker has accumulated. During a historic rookie season, Walker shocked the world after predicting that he would dominate and win the 2021 Arnold Classic. Making good on his promise, he took his talents to his first Mr. Olympia event next. Following a fifth-place performance, Walker has shown that his physique can stand next to just about anyone when he comes into a show at 100 percent.

With his offseason efforts underway, it will be interesting to see what adjustments Nick makes to his overall package in Dec. at the biggest show of the year. Walker made it clear months ago that he would be opting not to compete at the Arnold in 2022 to focus on improving his physique for Olympia.

Walker likes to change his scenery often when it comes to training. The 2021 Arnold Classic champ shared a workout on his YouTube channel that taxed his delts and triceps.

“We are here at Crunch Fitness. I’ll say first things first, a lot of people underestimate Crunch Fitness. It’s a lot better than people think it is. Every piece of fucking hammer strength that you can think of. Sure, dumbbells go to 125(lbs) but you got a shit ton of other shit to make up for it. But today we are going to do some chest triceps and some light chest. We are going to start with the Smith machine shoulder press. Going to see what I can really push here, so I’m not going to fatigue too early. I’m going to see if I can get at least four plates, goodness, if I can do that, I’ll be happy.” Nick Walker shared.

One reason why Walker utilizes machines over weights is because he feels machines are safer in regard to injuries. After working the delts and triceps, Walker moves on to exercises that effectively work the chest.

“Alright so, that concludes today’s shoulder, triceps, pump chest. To recap, Smith Machine shoulder press, but I wanted like four plates for like 8-10 but that didn’t happen. I only have four, so trying to come back quickly for me though so I’m not worried about it. We did two sets of three plates on each side, for 10-12 what is it, single drop. Then moved to a superset for rear delts. 3 sets there, 12-15. Side laterals, where we did 3 sets, 10-12 with a superset in the last two sets of whatever you call that stuff.”

Walker made headlines recently after announcing that he’s working with a new coach, bodybuilder, and dietician Dominick Mutascio. During his epic rookie season, Matt Jansen served as Nick’s coach which saw him win the New York Pro and the Arnold Classic in the same year. Walker is excited to attend the Arnold this weekend despite not being a competitor this year.

“Pretty good pump. Overall strength is definitely coming up, not too worried about it right now. I still got a long ways to the Olympia. Weight was 296 this morning, diet changes and everything else, we’re going over all that with my new coach. Making changes, when we come back to the Arnold. Right now, we’re just in the volume phase of training, so when we come back from the Arnold, we’ll probably switch it up to a more progressive overload, focus on the strength aspect of everything. Which I’m pretty excited about. Most importantly, I’m excited to see everyone at the Arnold so if you’re around, come stop by.”

Mr. Olympia is several months away, but “The Mutant” isn’t taking chances and has been killing it in the gym to ensure he comes back in Dec. with an improved package. Walker is no doubt making the most of his offseason judging by his latest delt and triceps workout.