Turn into a fighting machine with The Beast Incarnate's transformation program. 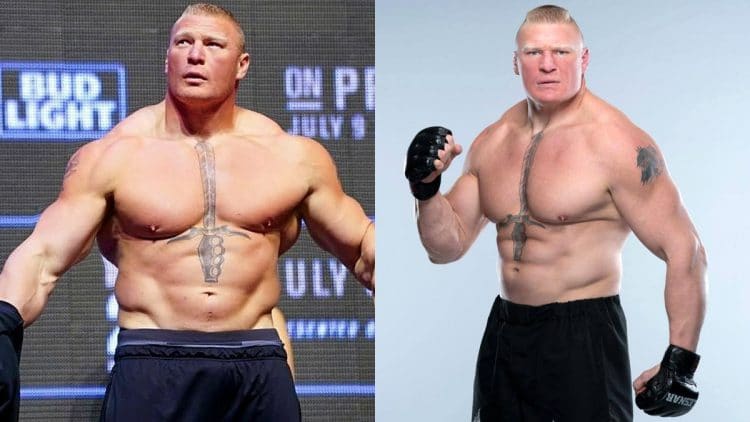 Brock Lesnar is an American professional wrestler, WWE performer, and UFC mixed martial artist famous for his fighting skills, aggression, and monster strength. “The Beast Incarnate” is also one of the most muscular wrestlers of all time.

Lesnar is a total badass — also evident by the dagger tattooed across his abdomen — and delivers one heck of a show every time he steps inside a combat sports arena.

Brock Lesnar is built like a tank and quick like a cheetah — a deadly combination for a fighter. His mountainesque traps, broad shoulders, wide chest, thick arms, and sprawling back can put many pro bodybuilders to shame.

After making a name for himself in WWE, Lesnar — aka The Conquerer — started competing in the UFC in the heavyweight division. He has defeated big names in WWE and UFC and is an A-lister in both organizations.

Brock grew up on a farm and lifted farm equipment to build muscle and strength. He started competing in wrestling tournaments in high school and won several major statewide competitions. Saying that he showed promise since his early wrestling days would be an understatement.

After high school, Lesnar won a scholarship to wrestle at The University of Minnesota. He finished college with a record of 106 wins to five losses. Shortly after graduation from college, he was scouted by the WWE (WWF, at the time) as a rising talent.

Brock Lesnar became the youngest “WWE champion” of all time by winning the title at the age of 25 by defeating The Rock at the SummerSlam pay-per-view in 2002.

While Brock might have experienced a lot of ups and down in his wrestling and UFC career, one thing has stayed constant throughout — his training and diet program.

Brock Lesnar made a lot of dieting mistakes while transforming his physique. He started as a carnivore — only relying on meat to meet his daily calorie goals, but that soon landed him in trouble.

He adheres to the following dieting principles to stay in shape throughout the year:

Having spent his early years in South Dakota, Lesnar always prefers eating game meat over store-bought meat. This type of meat is from non-domesticated and free-range animals. Joe Rogan is another celebrity who is a fan of game meat and likes to hunt his own food.

Game meat is considered one of the healthiest sources of meat as it is low in fat and cholesterol. Additionally, game meat does not have any hormones or antibiotics typically found in grocery store meat.

Brock Lesnar is a unit. You do not build a physique like him while following a calorie deficit diet. Paul Heyman once revealed that Brock’s dining bill alone goes north of $1400 when they eat out for dinner.

“When we go to a steakhouse, it’s usually 2 or 3 porterhouses, some vegetables because he now mixes it up, a small amount of complex carbs and a lot of water.” — Paul Heyman

3. Don’t Forget About the Fiber

Lesnar followed a carnivore diet for a big part of his pro wrestling and UFC career. However, shortly after winning the UFC World Heavyweight title, he was diagnosed with mononucleosis and diverticulitis. The condition is caused when an individual is not eating enough fiber.

Diverticulitis is a disease of the digestive tract in which tiny pouches form on the colon. It allows food to become trapped and causes major problems like inflammation and bleeding. In Lesnar’s case, it had gone on for a while and was so serious he needed surgery to repair the damage and was considered lucky to be alive.

“I have a high threshold for pain, higher than most guys, and I couldn’t deal with it.” — Brock Lesnar on dealing with diverticulitis

Notably, after recovering from the disease, The Beast Incarnate revealed that he had never been ill his whole life.

He encountered the illness probably because he had been consuming a high-protein diet while ignoring the other nutrition groups.

The lack of fiber intake caused his intensities to rupture, and Lesnar’s bodyweight dropped from 275 pounds to 248 pounds during the period.

After recovering from the illness, Brock now follows a balanced diet and focuses on meeting his daily macro and micronutrient goals through a whole food diet.

“What got me here was a total protein diet, not enough fiber, and that’s where I was, I totally changed my diet, got on some natural healing medicine, and was just doing a lot of praying.” — Brock Lesnar

The WWE superstar rarely speaks about his diet in public. However, he had once stated that his daily caloric intake goes up to 3,200 calories.

Here is what Brock Lesnar eats in a day: 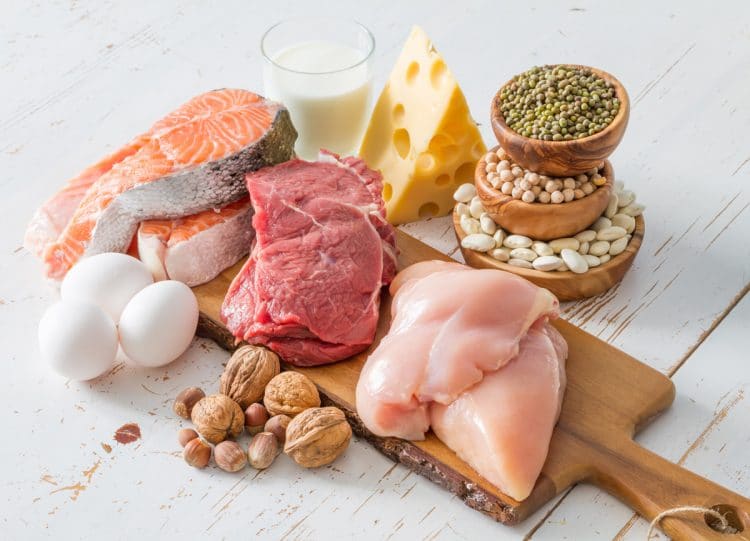 You could substitute some of the food items on Brock Lesnar’s diet with the following items:

Although the WWE superstar follows a high-calorie diet, he does not use it as an excuse to binge on unhealthy foods. Stay away from the following foods on Lesnar’s diet program:

While growing up on a farm in South Dakota, Lesnar ran across a field with a 180-pound tree trunk placed across his shoulders to build core and leg strength.

However, running with a tree trunk on your back alone cannot help you exchange blows with the top fighters in the world in a UFC cage or beat the Undertaker at Wrestlemania. So, Lesnar switched to a training program that helped him transform into a fighting machine.

According to The Beast Incarnate, the game is mental as much as it is physical. He works to stay focused on his goals, and he is always working on strengthening his weak spots.

Here are the training principles Lesnar swears by:

Brock Lesnar was arguably in the best shape of his life during his MMA days. Since Brock Lesnar is a wrestler and an MMA fighter, he follows a training regimen that helps him prepare for both sports.

Besides, for Lesnar, having big muscles is not enough. He also works on improving his speed, agility, and endurance to enhance his performance in the ring. For that purpose, his workout program includes HIIT drills, skipping plyometrics, cross-training, etc

Lesnar might spend up to 2-3 hours in the gym on a typical day. However, he breaks down his MMA and weight training routines into two different sessions. He completes his MMA training in the morning and follows it up with a resistance training routine later in the evening.

Lesnar follows a high-volume training regimen and performs at least 21 sets in each workout. Most people will dismiss this as a sure-shot way of overtraining, but not Brock Lesnar.

Additionally, the former WWE World Heavyweight champion ensures that he is keeping his workout intensity high by limiting rest between sets to less than 60 seconds.

Being in the WWE is an exercise in endurance. Many wrestlers perform some 200 days a year. Training and wrestling without a proper recovery program can lead to mental and physical exhaustion.

Lesnar has learned the importance of taking recovery time and prioritizes it. Besides, he uses a personalized diet and supplementation program to help with his recovery. He also drinks at least a gallon of water every day to keep himself hydrated.

Lesnar works out six days a week, including his MMA, gym, and circuit training routines. Without any further ado, let’s dive into his training regimen.

The smirk of a champion. #WrestleMania

The former UFC Heavyweight champ follows a four-day strength training regimen to build muscle mass and strength. Here is what his gym routine looks like:

Day 2: Back and Biceps

Brock Lesnar uses the following supplements to remain in a fight-ready shape throughout the year:

Brock Lesnar is a star wrestling entertainer and UFC fighter. He is one of the strongest and most muscular athletes in combat sports. The Beast Incarnate follows an elaborate training and diet program to keep his physique in top condition.

Lesnar has learned most of his dieting and training principles the hard way. However, you can benefit from his experience and use the transformation program above to shorten your learning curve and carve a physique like The Conquerer. Best of luck!

12 Exercise Bike Workouts for Getting Shredded

Hafþór Björnsson is a retired former Strongman athlete from Iceland. He was the 2018 World's Strongest Man champion and has...