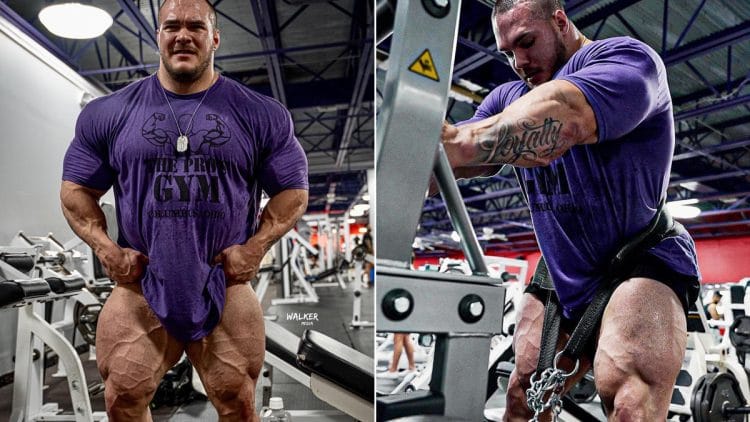 Nick Walker will most likely wait until the 2022 Olympia to grace the stage. He last competed at the 2021 Olympia and finished 5th. This has already been the longest off-season of Nick Walker’s bodybuilding career. The 27-year-old routinely shares bodybuilding content on his YouTube channel and provides glimpses of his off-season training. He recently shared the leg day workout that emphasized heavily on quads.

At the beginning of the video, Nick Walker stated that his last week of training was kind of a de-load week. He chose to amp up the training starting with the leg day.

Walker’s quad day workout consisted of high-rep sets to pump as much blood into the muscles as possible. Before starting the workout he revealed that most of the workouts will consist of squat variations.

Nick Walker warmed up with these two workouts and worked the adductor muscles before jumping into the working sets. He performed two sets of each workout to get the blood flowing into the muscles.

During the closing remarks, Nick Walker stated that his goal is to maintain the adductor muscles as they are right now and does not intend to make them any bigger.

“I feel I have pretty powerful adductors as is. So I don’t want them to get too much bigger. I just kind of want to maintain them. So we did like two sets each there,” Nick Walker said.

Nick Walker started the working sets with pendulum squats on the machine. For the uninitiated, the individual performing this workout stands on an inclined and adjustable platform while the padded levers rest on the shoulders. The individual performs Squats with the help of levers. Unlike a traditional Squat, pendulum squats put minimal to no stress on the lower back.

Nick Walker claims it to be one of his favorite workouts. He increased the volume for this movement and performed two sets to failure before moving on to the next one.

The belt squats or hip belt squats remove shoulders and upper body from the picture and place emphasis on the lower body. Therefore they are effective in bringing about lower limb hypertrophy. While they have fallen in and out of trend, many strength sports athletes have popularised it in recent times due to its benefits in building the lower body muscles.

“I don’t care what anyone says… if you know how to do it, it’s f*ing awesome,” Nick Walker said.

Nick Walker performed two sets to failure and showed off the massive quads.

After working the quads extensively in the first two movements, Nick Walker shifted the focus to hamstrings in the third movement.

Nick Walker went back to working the quads for the fourth movement and performed three sets of Smith Machine squats with progressive overload. Each set consisted of 15 reps.

The leg day came to an end with two sets of single-leg extensions. Nick Walker performed two sets of the workout with 15 reps each to end the quad session. Getting the contraction was Walker’s goal for this workout. Therefore he did not go heavy and chose to perform it with moderate weights.

Nick Walker prefers to combine calf workouts with other muscle groups. He called it a day after performing three sets of calf raises on the Hack Squat machine.

Walker is currently working with a new coach and dietician Dominick Mutascio to bring up his conditioning from last year to win the 2022 Olympia weekend on Dec. 16-18, 2022, in Las Vegas, NV.

The 21 Day Smoothie Diet: Is it a Healthy Weight Loss Diet?