In preparation for 2022 Mr. Olympia, Nick Walker joined 212 Olympia champion Kamal Elgargni and Samson Dauda for a grueling day of back workouts. 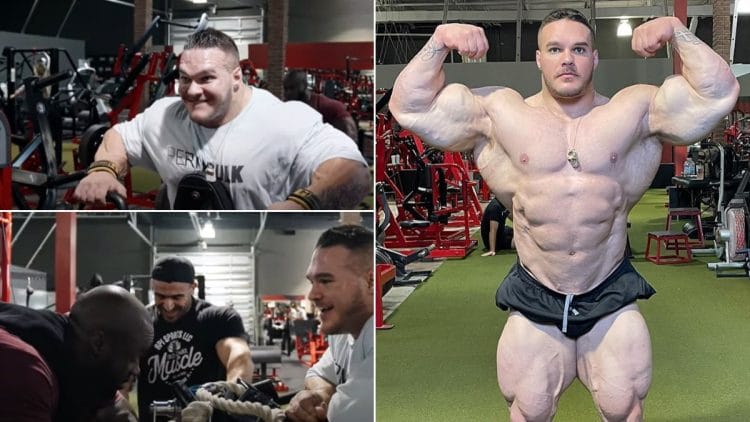 Men’s Open competitors Nick Walker and Samson Dauda joined 212 Olympia champion Kamal Elgargni for a series of high-volume back workouts. Nick, Samson and Kamal met at the MI40 gym in Tampa, Florida looking to make improvements and remain busy during their respective off-seasons.

Walker made his presence in the IFBB Pro League well known following a tremendous 2021 season of bodybuilding. He captured the 2021 New York Pro title and followed up the impressive performance by making a statement at the 2021 Arnold Classic. Not only was “The Mutant” victorious in Ohio last year, but he won the prestigious show on his first attempt. Later that year, he brought his monstrous physique to his first Olympia show last Dec., and secured fifth place, showing that he can stand against some of the world’s best bodybuilders.

Fellow Men’s Open standout Samson Dauda is looking to make improvements to his physique as he continues coming razor-close to winning a major show. Dauda competed at two IFBB Pro events last year. First, he came in second at the 2021 Arnold Classic United Kingdom and then built upon that success with a third place showing at the Yamamoto Cup Pro. He returned to the 2022 Arnold Classic, where he earned fourth place after putting forth a very memorable posing routine.

Joining the pair of Men’s Open competitors is Kamal Elgargni. A 212 Olympia champion in 2019, Elgargni is accustomed to pushing the pace in training and understands how to command a stage. From 2018-2021, Elgargni has competed at 212 Olympia and made it to the podium the last four years. After a second place showing in 2020, and then earning third in 2021, Elgargni is eager to prove to himself and fans that he can still topple elite-level talent.

In a recent YouTube video, Nick Walker, Kamal Elgargni and Samson Dauda linked up to hit a series of demanding back workouts. The exact amount of reps and sets featured in the video were unclear.

Walker and company began the workout routine building their backs up with lat pulldowns. The plate-loaded machine is ideal for isolating each side of the body and all three bodybuilders took advantage of the minor torso rotations throughout both movements. Nick, Samson and Kamal used a reverse-grip or ‘underhand grip’ to maximize their contractions. During the exercise, all three men performed three sets for an undisclosed amount of reps.

“That’s what we did. 3 sets of underhand grip. We are now going to do one-arm dumbbell row. We are going to use different weight. Perform three sets of it, we’re going to go 12-15 reps. This is more of a high-volume workout. I’m going to let Kamal run the show. Only the second exercise and I’m dead.” Walker said.

Kamal kicked off the second exercise with one-arm dumbbell rows. The exercise is ideal for building the lat muscles. Walker joined Kamal by lifting a 67.5-kilogram (144.8 pounds) for his first set and increased the weight to what looked like 80-kilogram (176 pound) load on his next set. After completing the one-arm dumbbell rows, Walker admitted that movement took some extra effort. According to the footage, the group powered through 3 sets for roughly 12-15 reps each.

Elgargni, Dauda and Walker alternated on the chest-supported row, and kept their elbows high, while squeezing the shoulder blades to optimize contractions on the upper back muscles.

After strapping a long bar hammer grip attachment, the bodybuilders manipulated their bodyweight through each stretch and pull, before hitting a few drop sets. During the routine, Elgargni continued to push Samson, who clearly felt the resistance during this movement.

“Come on, let’s do it. Alright, another set. One, two, three, stretch it! Come on! Blast it! Squeeze and stretch a little bit.” Elgargni shouted.

In an effort to get the most out of the workout, the former 212 Olympia champ Elgargni offered a few pointers to Walker and guided him through a series of bodyweight back extensions. One of the biggest takeaways from this movement was how much Elgargni stressed to keep tension within the lower back.

Elgargni proceeded to the cables for a finisher movement. He got the most out of this workout by combining a hip rotation with a low row, using a rope.

“Overall, good workout. Great pump. A little different than what I’m used to training but back is completely pumped, so that’s the way it should be. It was a good workout. Nick concluded.”

“It was a pleasure to train with you guys.” Elgargni told Nick and Samson.

While Walker has been utilizing heavier weight as of late, the change-up and high-volume workout certainly tested his strength. After the cable low-row movements, Walker, Dauda, and Elgargni called it a day. If their recent high-volume back training session is any indication of their upcoming season, all three bodybuilders plan to bring a wow factor to their next marquee event.