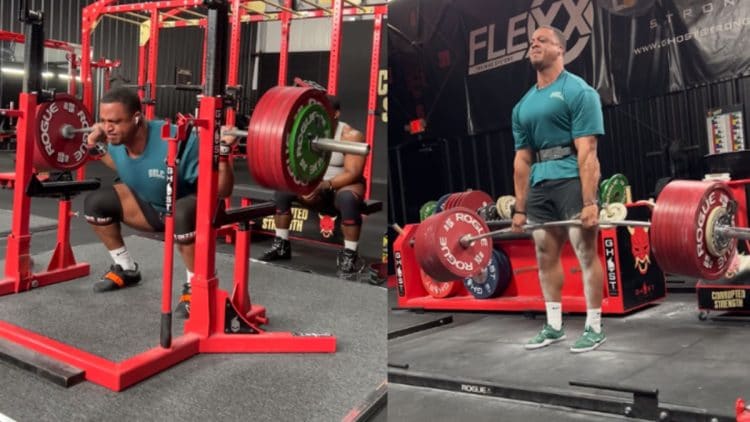 Powerlifter Jamal Browner seems to be dishing out new PRs every couple of days. In recent times, his greatest improvement came on the deadlifts, but now his squats are significantly improving as well. Jamal started his recent training session with squats and ended up hitting a new three rep PR with 749.5 lbs (340 kg) loaded on the bar. In addition, following the exhausting squat session, Jamal moved on to deadlifts where he pulled a huge 953.5 lbs (432.5 kg) conventional PR.

Jamal Browner’s new squat rep PR looked absolutely incredible. Jamal squatted 749.5 lbs (340 kg) with ease, and was even comfortable enough to do it without spotters. Even his fellow elite powerlifter, Russel Orhii, was visibly surprised as he was sitting behind Jamal. In addition, Jamal only used a lifting belt, knee sleeves, and wrist wraps.

“Surprisingly, this moved better than expected.”

After lifting some bar-bending weight on the squats, Jamal performed some heavy pulls in the same training session. This resulted in an arguably even more impressive PR. Jamal deadlifted 953.5 lbs (432.5 kg), and not only did he do it with a conventional stance but also completely raw, having only used a lifting belt. This PR did not come without struggle, as Jamal almost failed it in the lockout phase, but he was ultimately able to complete it.

“I almost gave up on it after I hit some turbulence. But aye, I got it!!”

At only 27-years-old, Jamal is a 2x World Record Holder in the 110 kg weight class. He is mostly known for his incredible deadlift prowess, having gained some attention after pulling 1065 lbs (483 kg) in training. Many people consider that Jamal will potentially become the lightest person ever to deadlift over 1103.2 lbs (500 kg). He already attempted it once, and pulled half a ton up to his knees, but couldn’t complete the lift.

Jamal started professionally competing in powerlifting in 2016 and has taken part in 15 sanctioned competitions since then. He has won 10 of them, most notably the 2021 WRPF Hybrid Showdown III and the 2020 WRPF Hybrid Showdown II. Jamal is also the first person in the 110 kg weight class to Total 1000 kg (2204.6 lbs).

It would be interesting to see how much Jamal Browner could pull if he put on a deadlift suit and lifting straps, like the Strongman athletes do. If he ever does crossover and take part in a Strongman competition, it will definitely be a sight to see how he performs next to champions. Jamal could probably pull incredible amounts of weight, but it is unclear how close he would get to Hafthor Björnsson’s 501 kg (1104.5 lbs) World Record Deadlift.

Jamal’s official competition deadlift PR was done with a sumo stance, and it is just 17.5 lbs (8 kg) heavier than his recent pull. This proves that Jamal is one of the strongest deadlifters with any stance. However, it looks like his conventional training had a big carryover to the squats, as he scored a new PR and made it look like a warm-up.