Naomi Sheppard also won the raw w/ wraps in the 67.5 Kg division of the 2022 WRPF The Ghost Clash. 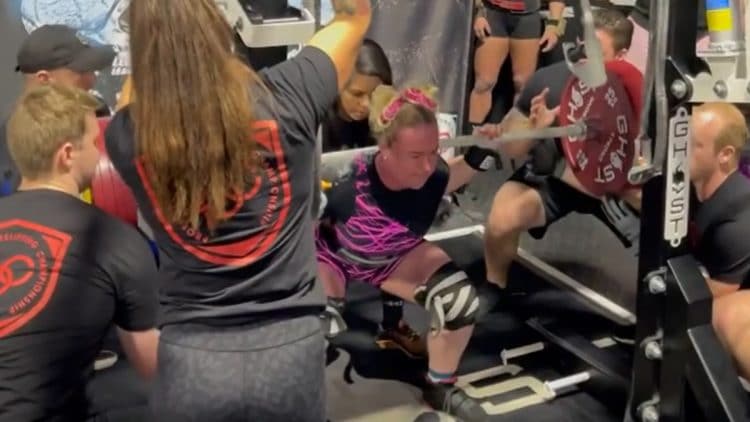 The video of the World Record was posted on the Ghost Clash Instagram page, and we can see that the lift required a bit of a struggle. However, Naomi pushed through and claimed the record. The most impressive part is the depth of her squat. In addition, this squat gave Naomi a massive advantage, which she used and ended up winning the competition.

The previous World Record Squat was set exactly three months ago, and didn’t stand that long. The record was held by Jaclyn Cornwell, as she squatted 260.8 kg (575 lbs) at the 2021 APF North of the Border competition.

The winner in the 2022 WRPF Ghost Clash was decided by the highest WILKS score. Naomi dominated the field with a score of 616.322, as no other competitors crossed the 600 WILKS mark. This also earned her $5,000 of prize money.

Courtesy of Alpowerliftingtv YouTube channel, you can watch all of her lifts here:

Naomi Sheppard is 30-years-old and has been competing since 2015. Her first competition was the 2015 BPU Midlands Qualifier. Including The 2022 Ghost Clash, Naomi took part in 12 sanctioned competitions and won ten of them. She mostly competes in the World Powerlifting Congress (WPC) federation and is a WPC World Champion and a 3x WPC European Champion.

Naomi also sometimes competes in the wraps category, and her squat and total with wraps PRs are:

Naomi Sheppard squatted over 3.9x her bodyweight to claim this world record. In addition, this was a brilliant performance, and with time, she will only get better. She is definitely shaping up to be one of the best powerlifters out there.