The popular Ramon Dino looks to be made of stone in a recent physique update. 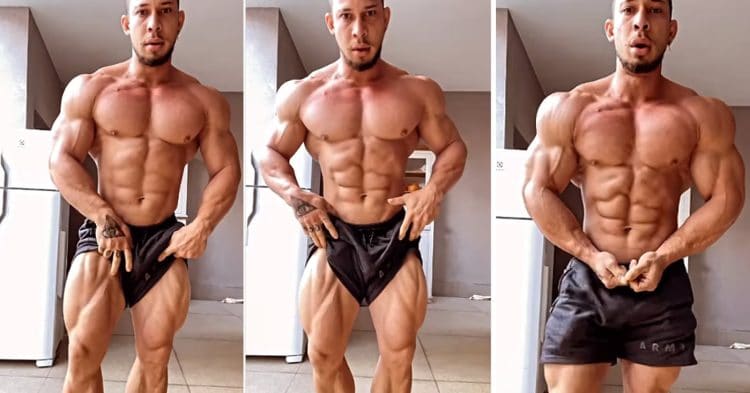 Classic Physique competitor Ramon Rocha Querioz, AKA Ramon Dino is undoubtedly a name to watch in 2022. Ramon Dino has made continued gains in the offseason and a recent physique update indicates that he will be a major threat in the coming years and at the upcoming 2022 Arnold Classic.

The rising Brazilian prospect has impressed often with his incredible physique updates. Despite lacking experience given his young age of 26-years-old, he remains a disciplined bodybuilder and has a chip on his shoulder that fuels him to push even harder during training sessions.

Ramon Rocha Queiroz attained his pro card after earning a 1st place finish at the 2018 Mr. Olympia Amateur Brazil. It was not until 3-years later that Ramon Dino would enter a professional bodybuilding contest. His first pro show was the 2021 Europa Pro and he performed exceedingly well. After achieving runner-up in the Classic Physique division at the 2021 Europa Pro show, Dino earned prize money and his invite to 2021 Mr. Olympia.

Following his 5th place finish at 2021 Mr. Olympia, it’s crystal clear that Ramon Dino is among the most promising prospects in Classic Physique right now. With the 2022 Arnold Classic just weeks away, the young Brazilian is a front-runner to give the current champion, Terrence Ruffin a run for his money. Terrance Ruffin is eager to re-establish himself as the Arnold Classic Physique champion and remains a potent force in any competition.

Taking place in Columbus, Ohio from March 3rd – March 6th, at the Arnold Sports Festival, the 2022 Arnold Classic will pit some of the world’s most talented bodybuilders against each other. Recently, Ramon Dino — one of Brazil’s brightest stars took to Instagram to show off his physique ahead of the big show.

“Another journey into action, dedication increases and naturally the will to err ceases to exist! Up Brazil” Ramon Dino shared. (translated by Google)

With the exception of Chris Bumstead, every top five Classic Physique finisher of 2021 Olympia will compete at the 2022 Arnold Classic. With the 2021 Olympia runner-up, Terrence Ruffin in the mix, the field of competitors will be star-studded and hungry for a major title win. Given that Ramon Dino scored 5th at Olympia last year, there will be three competitors who ranked above him, whom he will have the chance to face in March at the 2022 Arnold Classic.

Ramon Dino has a huge opportunity at the 2022 Arnold Classic to make a statement. Granted, he’s only 26-years-old whereas other competitors might have an edge in experience; Dino’s physique updates show a serious commitment to preparation.