No Result
View All Result
Exercise Guides
Evidence Based
Evidence Based Research
This article was written by one of our qualified writers, and fact-checked by our experts. The numbers in parentheses (e.g. 1, 2, 3, etc.) throughout the article, are reference links to peer-reviewed studies.
Our team of experts include a board-certified physician, nutritionists, dietitians, certified personal trainers, strength training experts, and exercise specialists.
Read Our Editorial Process

Master the reverse pec deck fly to build round and fuller shoulders.

Folks that have tried nailing a headshot on a head glitch or a constantly moving enemy (in Call of Duty, obviously) would agree that it can be both challenging and frustrating. The target is small and the surrounding stimuli too high. Your rear delts, also known as posterior deltoids, are not much different. They are placed at your back and are a tiny muscle group that is hard to isolate.

Your back is the second-biggest muscle group consisting of muscles like the lats, traps, rhomboids, teres major and minors, and erector spinae. When you perform posterior-focused exercises, it can be hard to isolate the rear delts and ensure bigger and more dominating muscles like the lats and traps do not take over.

And if this wasn’t enough, it is generally harder to establish a mind-muscle connection with your back muscles as you cannot look at them directly in the mirror while training.

But why is training posterior deltoids important, you ask?

If you want to be a bodybuilder, you must focus on your overall physique aesthetics, including ensuring your musculature is symmetrical, proportionate, and balanced. Plus, you’ll never be able to achieve 3D shoulders if you don’t have well-developed posterior deltoids.

Role of the real delts: Posterior deltoids help move your arms backward. Furthermore, they are used in many pulling movements and are important shoulder stabilizers.

Since your rear delts are a small muscle group that is hard to target, isolation exercises can help train them effectively. Enter the reverse pec deck fly, also known as the machine reverse fly.

The reverse pec deck fly is one of the most popular but incorrectly performed exercises. However, we are here to fix this.

These are the primary and secondary muscles trained by this exercise: 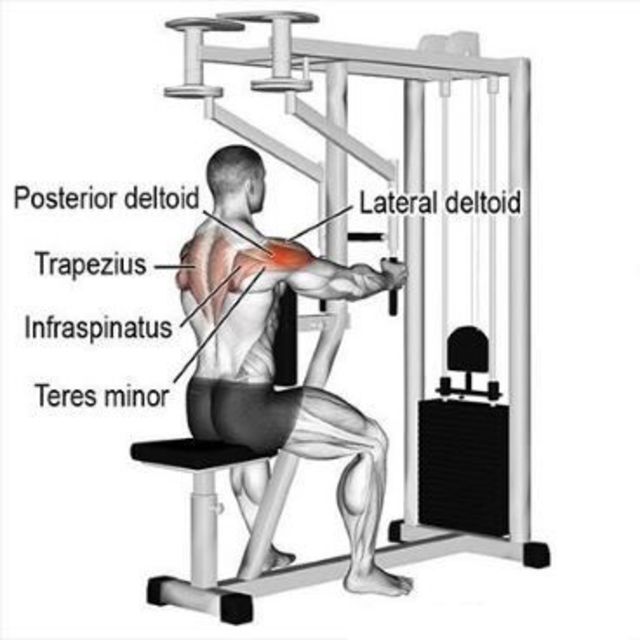 The reverse pec deck fly is an isolation exercise that primarily focuses on the posterior deltoids. Maintain a slight bend in your elbows throughout the movement for an optimal rear delt engagement. Your arms shouldn’t be extended straight. On the other hand, don’t bend your elbows too much while performing this exercise.

Because the machine reverse fly involves pulling your elbows behind your torso, you’ll experience rhomboids, teres major, infraspinatus, and middle trapezius stimulation. However, if you feel greater activation in your other upper back muscles than the rear delts, you should limit your range of motion.

How To Perform the Reverse Pec Deck Fly

This is how to perform the reverse pec deck fly using the correct form:

Here are a few tips to get the best bang for your buck while performing the machine reverse fly:

Here are the most recurrent mistakes people make while performing the reverse pec deck fly:

If we had to point out the biggest mistake people make while doing the machine reverse fly, it would be their use of momentum. How to know if you are using momentum? If you have to pull your chest off the pad at any point during the set, it is a sign you are cheating.

Using a jerking motion takes tension off your rear delts and puts it on the more dominant upper back muscles like the traps and rhomboids. So, check your ego at the door before entering the gym, and do not use momentum to lift the weight by swinging your torso back and forth.

While performing this exercise, most people go through the motions for the sake of it. They’ll put more weight on the machine than they can handle and rush through the movement just to achieve their rep target.

However, you should focus on contracting your muscles with every rep if your goal is to build muscle mass. Pause at the top for a couple of seconds and squeeze the life out of your rear delts.

Sit uptight while performing this exercise for optimal rear delt activation. Also, some people round their backs as they think it will help them achieve better stimulation at the bottom of the movement. However, doing so will result in greater activation of the teres muscles and rhomboids.

Similarly, do not arch your back at the top in hopes of better posterior delt recruitment. Furthermore, looking down or up while performing this exercise also takes off tension from your rear delts.

Lifting weights help enforce strong shoulders, which translates to better performance in pushing and pulling exercises like the bench press, overhead press, and barbell row. Plus, it improves your day-to-day functionality.

It is no secret that weight training for hypertrophy can help improve your aesthetics by toning and building muscle mass and definition. Posterior delt exercises give your shoulders a rounder and fuller look.

Since many folks spend the majority of their days hunched over a computer or phone screen, performing a back-fly movement like the machine reverse fly can improve their posture.

The main role of the rear delts is to pull your shoulders back. Not only does regularly performing posterior deltoid exercises build strength and size, but it also improves shoulder mobility.

Unlike quads, hams, or lateral delts, the posterior deltoids are a relatively small muscle group and hence do not need a ton of volume and intensity to train optimally.

We recommend performing 1-2 exercises in the 10-15 rep range with a picture-perfect form for rear delts in each workout. Anything over this would be overkill. Furthermore, you shouldn’t try to go too heavy on this exercise. Keep the weights moderate and focus on contracting your muscles with every rep.

While many lifters like to perform the rear peck deck fly as a finisher, you could do this exercise at the beginning of your workout if your posterior delts are lagging compared to its other two siblings — the anterior and lateral delts.

The bent-over dumbbell fly is one of the most popular free-weight posterior delt exercises and should be a part of your training regimen.

The standing cable reverse fly is done on the cable pulley machine, which helps eliminate inertia and keeps your posterior deltoids under constant tension throughout the motion.

Although most people think rows only target the back, a few variations of this movement can also target the rear delts effectively.

The incline bench dumbbell rear delt fly is a variation of the bent-over dumbbell fly (#1). This variation helps you better focus on your rear delts by removing your core and stabilizers from the equation. To get into position for this exercise, set up an incline bench at a 45-60 degree angle with the floor and use the same technique as the conventional rear delt fly to annihilate your target muscles.

The cable face pull is a compound exercise that trains your rear delts, traps, and upper back muscles.

This resistance band exercise is one of the most effective shoulder warm-up exercises you can do at the beginning of any upper-body training routine.

How many reps should I perform on the reverse pec deck fly?

Since the rear delts are a small muscle group, we recommend performing 10-15 reps on this isolation exercise for optimal muscle hypertrophy.

How much weight should I lift on the reverse pec deck fly?

You should always choose your weight based on your experience level, irrespective of the exercise. Lifting too heavy can hamper your form and put you at a greater risk of injury.

Can I replace the bent-over dumbbell fly with the reverse pec deck fly in my training routine?

The reverse pec deck fly and bent-over dumbbell fly are isolation lifts that train mostly the same muscles. However, you shouldn’t choose one over the other as both deserve a place in your exercise arsenal. Performing the same exercises over and over can lead you to a plateau.

Rear deltoids can be one of the most stubborn muscle groups. Furthermore, they are a lagging muscle group for most lifters as it is hard to isolate and establish a mind-muscle connection with them.

However, this is where the reverse pec deck fly shines. Use this exercise and the variations mentioned in this article to take your posterior deltoid gains to the next level.