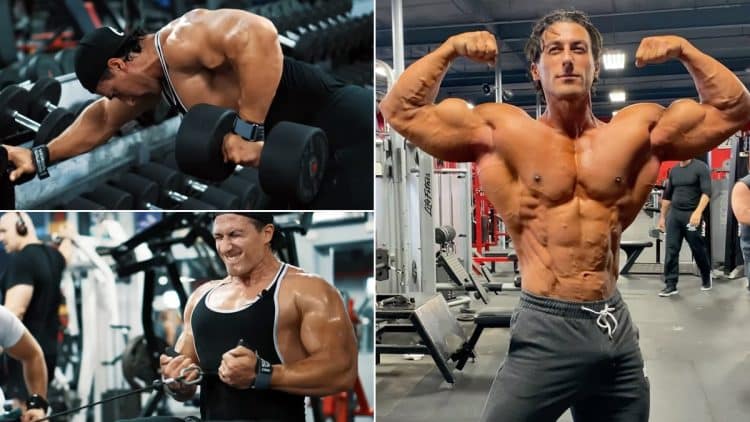 Sadik Hadzovic is preparing to make history in his Mr. Olympia comeback. Hadzovic is a Bosnian-American bodybuilder competing in the IFBB Pro League Men’s Physique division. He stepped on stage as a Classic Physique Olympia competitor in 2017. He finished third at the 2016 Olympia in the Men’s Physique division and seventh in the Classic Physique division at the 2017 Olympia. The sport of bodybuilding puts immense stress on a competitor’s mind and body, and taking some time off can help an athlete rejuvenate, which is what Hadzovic did after his 2019 Arnold Classic appearance.

Following his appearance at the 2019 AC as a Classic Physique competitor, Hadzovic returned to the Men’s Physique division with a bang and won the 2022 Pittsburgh Pro. This victory earned him a direct qualification for the 2022 Olympia. The 35-year-old competed again shortly after, securing third place at the 2022 New York Pro.

Hadzovic is currently preparing for the 2022 Olympia. He recently went through a solid back workout as part of his competition prep. So without further delay, let’s take a closer look at the detailed account of this session.

Sadik Hadzovic demolishes a back workout

Hadzovic started the workout with arguably the most effective compound movement for the back. The deadlift works the entire posterior chain along with the glutes, hamstrings, core, and even calves. It is also one of the most difficult exercises to perform. While speaking about the reason for starting the session with this movement, Hadzovic said:

“So we started with the hardest movement that there is for the back which is the deadlift. It has kind of been a repeating thing in my life. I always get the hard stuff done and then go on to do the easier stuff. Because a lot of people are running away from hard work, I am running to it. This way, I get better and better every year.”

The Bosnian-American bodybuilder performed a few sets of deadlifts with incrementally heavy weights. He highlighted a few key points about his techniques for the viewers to understand and said:

“Two things we are doing here. Feet are shoulder width (apart). I’m not beyond shoulders. Another thing is I am moving my hips and my legs at the same time. So I am driving forward on my hips and pressing my legs in one fast motion.”

While he has not reached that level yet, Hadzovic wishes to be able to deadlift with five plates on each side before the 2022 Olympia.

“We may be able to deadlift five plates before the Olympia,” Sadik said.

Hadzovic next took to another compound movement that primarily works the latissimus dorsi, trapezius, rhomboid, and posterior deltoid muscles in the back. The famed bodybuilder did some solid sets of this movement to light up the back muscles and took to the next exercise in his routine.

Pulldowns are important for building a wide back, and the lat pulldown is an excellent way to achieve this.

“Our focus this year is on thickness, thickness, and more thickness on the upper body. When it comes to the chest and back, you can’t be thick enough,” Hadzovic said.

The back and biceps are the primary pulling muscles in the upper body. However, allowing the grip and forearms to compensate or take over during pulling exercises is a fairly common mistake. There are many ways, like using cuffs instead of grabbing the handle, to solve this problem. However, Hadzovic prefers to use the monkey grip to remove the forearms and grip from the equation and pull the weights using his back.

“What do I try to do to negate that? I use a thumbless grip… allowing me to have more emphasis on only my back muscles.”

After cranking out a few good sets of this exercise, the 2022 Pittsburgh Pro winner jumped into the next exercise.

While vertical pulling exercises like lat pulldowns give you a wide back, horizontal pulls, like seated rows, help build thickness. Hadzovic next performed seated rows to work the upper back and lats. It is also an excellent exercise to improve your posture. Hadzovic did a few sets of seated rows and took to the next movement.

Hadzovic next took to the plate-loaded machine variation of seated rows and performed a few sets.

The elite bodybuilder next targeted the upper trapezius muscles with dumbbell shrugs. Additionally, this exercise can help improve grip and forearm strength if done regularly. Hadzovic performed a few sets of this exercise and wrapped up the back training session.

Hadzovic has all the tools to become an Olympia champion. The solid performances at the 2022 Pittsburgh Pro and the 2022 New York Pro prove that the time off has helped him get in the best shape of his life. However, we will find out on Dec. 15 how that helps his performance at the 2022 Olympia.

You can watch the full workout video below, courtesy of Sadik Hadzovic’s YouTube channel: