Find out what it took for Josh Brolin to transform from chunky to chiseled to take on the role of Cable in Deadpool 2; full details of his training and diet included. 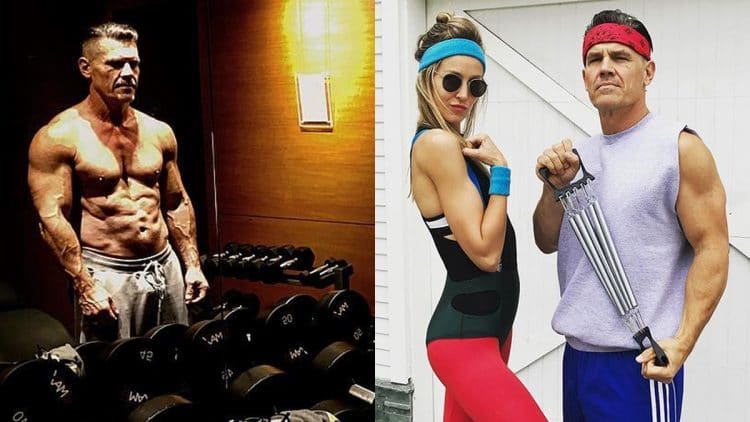 When Josh Brolin appeared on the big screen as Cable in 2018’s Deadpool 2, his fans were amazed at his incredible physique transformation. The formerly chunky actor had packed on solid slabs of muscle to pull off the role of the badass villain.

Want to know he did it, despite being beyond his prime? In this article, we’ll break down the workout and diet Josh followed to transform himself into a super anti-hero.

Who is Josh Brolin?

Born on February 12th, 1968, in Santa Monica, California, Josh is the son of actor James Brolin and a wildlife activist, Jane Cameron. Though his father was a famous actor, Josh was kept away from the Hollywood lifestyle as a child and raised on the family ranch in Templeton, California.

By age 16, Josh had developed a drug habit. He committed petty crimes in order to pay for the drugs, including stealing

“I mean, I never got into it and I never died from it, which is a good thing. I’ve had 19 friends who died. Most of those guys I grew up with, they’re all dead now.”

In his late teens, Josh appeared in a number of small TV roles. His first movie appearance was in The Goonies (1985). He was up against Johnny Depp for the lead role in the series 21 Jump Street.

Thrashin’ (1986) was Brolin’s second film. He later stated that he was appalled at his lack of acting ability and turned away from movies for a number of years. He appeared in stage roles in Rochester, New York before taking on the role of Wild Bill Hickok in the TV series Young Riders, which ran from 1989-to 92.

Josh’s acting career was pretty quiet in the 90s and early 2000s. Then, in 2007 he began taking on villain roles in a series of movies. These included 2007s Planet Terror and American Gangster, and 2010’s Wall Street: Money Never Sleeps.

In 2008 Josh starred as Geoge W. Bush in the movie biopic W. The same year he played the part of Dan White, the assassin of Harvey Milk in the movie Milk. He received an Oscar nomination for best actor in a supporting role for his efforts.

In 2010, Brolin played the title role in the DC Comics-inspired Jonah Hex. In 2012, it was announced that he would play Thanos in the Marvel Cinematic Universe franchise. He has appeared as the character in several movies, including Avengers: Infinity War and Avengers; Endgame.

In 2017, Josh signed a four-film contract to play Cable in the X-Men franchise. The first of those movies was 2018’s Deadpool 2.

To transform from chunky to ripped for his 2018 role as Cable in Deadpool 2, Josh had to get serious about what he was eating. He hunkered down and took on a strict diet that cut out high glycemic carbs. Here’s what Josh said about that time —

“Totally clean: no sugar, no breads, no pastas, no drugs, none of it. Fish, rice, eggs, veggies, water, one [bulletproof coffee] in the morning.”

Josh adopted a version of intermittent fasting combined with keto that allowed him to drop body fat without sacrificing muscle mass. One or two times per week, he would fast for 24 hours. After about 12 hours, his muscles would be glycogen depleted. At that point, his body would have no choice but to flip from a glucose-burning energy system to a fat-burning one. In this state, his body would be directly drawing from stored body fat to provide the energy he needed to get through the day.

On his non-fasting days, Josh would have four meals per day, spaced about four hours apart. Here is a sample diet plan Josh Brolin followed while training for his role in Deadpool 2 —

Prior to his workout, Josh will have a cup of keto coffee that is fortified with MCT oil.

When actors begin a physique transformation for a role, they usually sit down with their trainer and analyze the script to see which body parts will appear the most on-screen. For Josh, it was his shoulders and arms. As a result, shoulder and arm training is emphasized in the workout program.

For his role in Deadpool 2, John needed to lose weight while gaining muscle at the same time. To achieve that, he trained for a total of three hours per day. His morning workouts would be all cardio for fat loss, along with some calisthenics and mobility training.

Josh would come back in the evening for a traditional bodybuilding-style workout.

He abided by the following training split for his transformation —

Each of these workouts was performed once per week. Then, two days per week — Tuesday and Thursday — he would also do a full-body workout. The Thursday workout involves higher reps and lighter weights.

Josh is a proponent of drop sets. Dropsets include performing a set for 8-10 reps, stripping some weight off, and then pumping out another 8-10 reps. Josh would perform up to four drop sets of each exercise. He employed this technique to blow up his delts, biceps, and triceps.

Check Out: How To Lose Fat Without Losing Muscle

Below is Brolin’s training program —

HIIT stands for high-intensity interval training. It involves performing short, intense cardio bursts followed by even shorter rests. Josh Brolin made maximum use of HIIT training to torch body fat. He knew that HIIT would burn a ton of calories while he was doing it and even more afterward compared with continuous steady-state exercise (SSE) training, thanks to the enhanced post-exercise oxygen consumption (EPOC) effect. Here’s how to do HIIT like Brolin — [1]

Related: HIIT vs. LISS Cardio: Which One Is Best for Fitness and Fat Loss?

During his five-month prep to play Cable, Josh used a number of supplements to help fire his workouts, build muscle and lose body fat. Here is what he was taking —

These three are known as branch chain amino acids (BCAA). Their uniqueness lies in the fact that they alone are able to be utilized as energy in the muscle cell. The BCAAs also trigger protein synthesis.

Check Out: Best BCAA Supplements of 2023

It is a testosterone-boosting supplement that can help enhance workout recovery and promote fat loss.

This is a non-caffeine pre-workout powder. It is designed to provide extra energy to power through your workouts and deliver extra focus to keep you dialed in. There are also ingredients to promote blood flow for muscle-ripping pumps.

Creatine is a fuel source that the body uses to create adenosine triphosphate (ATP). ATP is an energy system used for short, intense bursts of energy, such as what you do when you’re weight training to build muscle.

Creatine can be found in meat and fish and is also made in small amounts by the human body. Supplementing with creatine will replace the ATP stores that have been used up during your workout, priming you for your next training session and filling out the muscle. Creatine causes water retention inside the muscle cell, which produces a fuller muscle appearance. As per experts, you should take five grams of creatine daily in the loading phase.

Josh takes a daily probiotic supplement to improve his digestion and balance out his gut bacteria.

Josh Brolin isn’t one of those guys who has been working out all his life, making his transformation to play Cable in Deadpool 2 at close to 50 years of age even more impressive.

Whether you are 15 or 50, you can use Brolin’s training principles, workouts, and diet to help you achieve your own transformation. So, go do it!