Rhianon Lovelace claims the most prestigious title for the second time in her career. 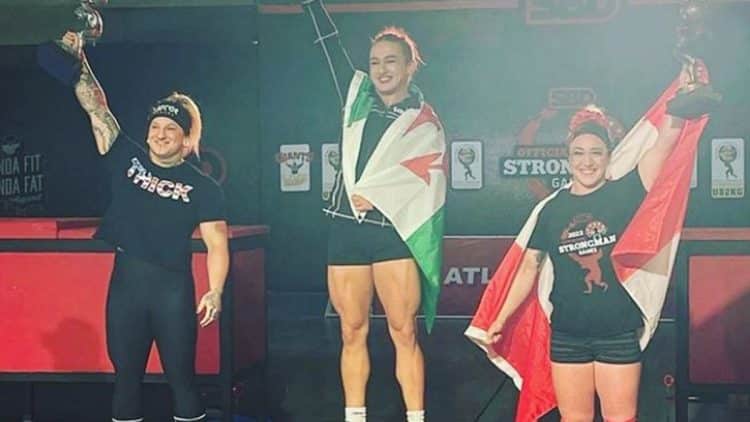 The greatest athletes in the sport of Strongwoman gathered in Dayton Beach, Florida, on November 12-13 to battle for the title of 2022 World’s Strongest Woman. They were separated in multiple divisions depending on their weight, but Rhianon Lovelace caught the eye of many with her victory in the 64-kilogram weight class. She smashed through seven events across two days and beat an entire array of incredible athletes.

Rhianon Lovelace ended up beating the second-place finisher by 8.5 points, which for Strongwoman, is an absolutely huge margin. She won four out of the seven events and climbed to the top of the podium despite a rough day one of the competition.

The first day of the 2022 World’s Strongest Woman consisted of five events. However, Rhianon Lovelace was not satisfied with how she started a competition, as she got a fifth-place finish in event one (Viking Press). She performed 12 reps of the 75-kilogram (165-pound) overhead press variation, which earned her 5.5 points.

Although she had an improved performance in the second event (100-kg / 220-lb Farmer’s Walk), Rhianon Lovelace got a third-place, which was still short of her ambitions. However, she blew everyone away on the third event (Axle Deadlift), as her 14 reps of 172.5 kilograms (380 pounds) were enough for her first event win.

Utilizing the momentum, Rhianon Lovelace also won the fourth event (Sandbag to Shoulder), since she was the only Strongwoman who was able to lift the final sandbag of 102 kilograms (225 pounds).

The start of day two saw the fifth event (Car Walk) take place, where Rhianon was the second-fastest in carrying a 267.5-kilogram (590-pound) frame.

Although Rhianon Lovelace put up another mid-table performance in the sixth event (Circus Dumbbell) and placed fifth, she had an enormous lead beforehand, so it didn’t affect her too much. Rhianon then wrapped up her impressive performance, with a win in event seven (Atlas Stones).

This is the second time Rhianon Lovelace has been crowned the U64KG World’s Strongest Woman, as she also won the competition in 2018. Apart from that, Rhianon got silver in the last year’s edition of this contest, while her debut in 2017 ended with a 9th place finish.

Rhianon Lovelace has also had an incredibly successful year, having broken multiple World Records across all weight classes. She is currently in possession of all Deadlift World Records in the 64-kilogram weight class.

Rhianon Lovelace is now the first woman in the 64-kilogram weight class to own two World’s Strongest Woman titles. She also ends her season with a flawless streak, having won five major titles, as well as breaking seven World Records. With 2023 just around the corner, Rhianon will look forward to claiming new achievements.