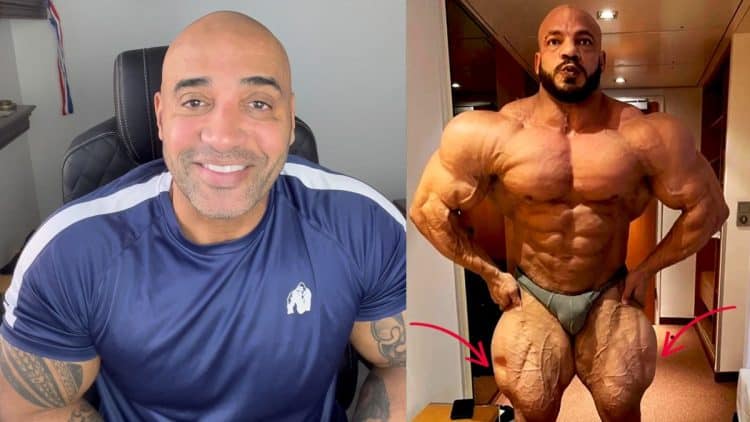 Dennis James, who coaches the reigning two-time Mr. Olympia Mamdouh ‘Big Ramy’ Elssbiay, is addressing concerns about the champion’s lower body in his latest podcast. In addition to 212 veteran Jose Raymond giving his 2022 Olympia predictions, James recently opened up about the ‘hole’ in Ramy’s right quad and taking steroids before Olympia contests.

Ramy has the biggest target on his back in the IFBB Men’s Open division. He captured the Mr. Olympia title in 2020 with a combination of size and deep muscle separation. At last year’s Olympia contest, Ramy defended his status as champion, even though some believe he left the door open for challengers to take his throne.

According to bodybuilding legend Phil Heath, Ramy was vulnerable to losing his title last year. He specified that if his physique looks similar to his 2021 look, it will be incredibly difficult to fend off contenders Brandon Curry and Hadi Choopan.

While all signs pointed to utter domination at 2022 Olympia for Ramy, many fans and bodybuilders have pointed out a glaring issue with his lower body, specifically, a ‘dent’ or ‘hole’ in the Egyptian’s right quad.

After finding out about the problem, top Open class competitor Iain Valliere believes Ramy should be docked at Mr. Olympia for the imbalance/imperfection. However, Ramy’s coach Dennis James voiced a different opinion. In the latest Muscle and Fitness podcast, James discussed the ‘hole’ in Ramy’s quad and emphasized that he shouldn’t be penalized for it.

During the podcast, James elaborated as to why Ramy has a dent or hole in his right quad.

James specified Ramy doesn’t have a muscle tear. He added that the area is not getting blood flow, which may cause further muscle atrophy.

“There’s no tear whatsoever. No butts about it. And if you look at these pictures, he’s had this for years. At least five years. He has had it for at least five years. Nobody ever said nothing. All of a sudden, people talk about, ‘ahh, he’s shooting his legs.’ Come on. That’s the last thing he needs to shoot.”

“I think it’s because there’s no blood supply in that area and he’s probably losing the muscle a little bit. That’s why there’s a dent. But it’s been there, it was the same last year. It was the exact same the year before,” James said.

Given that bodybuilders like Hunter Labrada have competed at Mr. Olympia with torn muscles (Labrada’s pec tear in 2021), James is inclined to believe Ramy’s issue will have no effect on the results of the 2022 Olympia contest.

In spite of the quad controversy, Dennis James is plenty confident in Ramy ahead of the show.

“The great thing in videos and pictures he doesn’t even look as impressive as he is when you see him in person. It’s a totally different ball game in person,” James added. “I think right now he’s way better than when he showed up the last two years and much heavier.”

When discussing his top six for 2022 Olympia, Raymond wasted no time. The 212 veteran is adamant William Bonac will jump into second place this year.

“[Big] Ramy, [William] Bonac, Hadi [Choopan], Brandon [Curry], this is tough. Still got Hunter and Nick. I want to throw Derek [Lunsford] up there. This is harder than ever. Nick [Walker in fifth], only because I thought Nick should have beat Hunter last year. Derek [in sixth],” Jose Raymond shared.

Raymond sees a bright future for Samson Dauda, who is trained by Milos Sarcev.

“His greatest asset is his quarter turn and his front relaxed. He’s [Samson Dauda] crazy looking. That’s why I brought him up,” Jose Raymond said.

Sarcev shared that Dauda and Rafael Brandao have a history of competing against each other. They will once again battle at 2022 Olympia in mid-December.

I didn’t ask him for weight the last four weeks. I said, ‘don’t step on the scale, don’t focus on that.’ Because look: I’m going to tell you this, Samson is heavier than he actually looks.” Sarcev said. “His genetics is off the charts. What we can expect from him in the next two or three years is mind boggling,” added Sarcev.

James on Cutting Steroids Right Before Olympia Contests: ‘I Don’t Think It Will Hurt’ Someone’s Chances

Before ending the discussion, the group talked using steroids the week before Olympia contests.

“I had Winstrol up to Wednesday okay but tablets. You say at the Arnolds you [Chris Cormier] stopped a week out,” says Sarcev.

“See Anavar I think I would stop that Anavar [right before Olympia]. I would continue the Premarin, the Arimidex and the Halotestin, and that’s it,” Dennis James told Sarcev. “I don’t think even if you would stop everything completely a week out [from Olympia] – I don’t think that would hurt you,”

Unlike previous seasons, Ramy has been far more open with his fanbase. He joined Dennis James a few weeks ago to discuss his preparations. When asked about his biggest weakness, Ramy doesn’t believe one body part stands out as weak. Instead, the two-time champ explained that his overall conditioning is what needs to be worked on most.

Considering the shape of Ramy throughout contest prep, most veterans and figureheads of the sport have deemed him a massive favorite. Despite concerns, James doesn’t believe the ‘hole’ or ‘dent’ in Ramy’s quad will stop him from winning his third straight title.