Gaspari issued a follow-up statement after an Instagram post comparing the backs of Hadi Choopan and Dorian Yates sparked controversy. 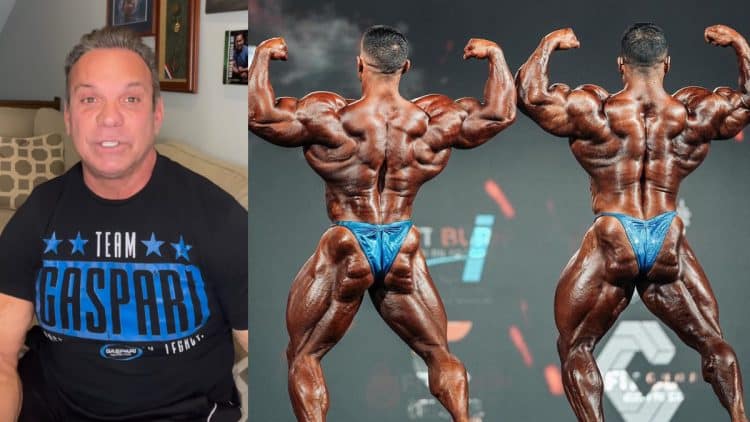 Bodybuilding veteran Rich Gaspari sparked controversy after comparing the backs of the 2022 Mr. Olympia Hadi Choopan and six-time champion Dorian Yates. Clearing the air, Gaspari published a video stressing that his post wasn’t meant to offend Choopan or serve as a comparison between bodybuilding eras.

“Just wanted to talk about my last post comparing the back of @hadi_choopan and @thedorianyates I wanted to say this was not at all a bash on Hadi but more constructive. Hadi is a true champion and Is the current Mr. Olympia and he earned that with his hard work and dedication to the sport,” Rich Gaspari shared.

Gaspari competed in the 1980s and 1990s, where he developed a powerful reputation for his work ethic, conditioning, and stage presence. While he never hoisted a Sandow over his head, the Men’s Open bodybuilder was committed to improving and pushed eight-time Mr. Olympia Lee Haney during his reign. Gaspari finished runner-up to Haney three times (1986,1987,1988), and also won the 1989 Arnold Classic during his time competing.

After the 2022 Olympia contest took place, Gaspari compared the lower backs of Hadi Choopan and Dorian Yates. He added that backs today aren’t as hard as they were 30 years ago. The post elicited strong reactions from the bodybuilding community, and even Choopan fired back. The newly crowned Mr. Olympia disagreed with the comparison considering Yates was known specifically for his monstrous back throughout his career.

Speaking on Instagram, Gaspari explained that he wasn’t trying to compare bodybuilding eras and specified that the controversial post concerning Yates and Choopan was supposed to be constructive.

Rich Gaspari On Backlash After Criticizing Hadi Choopan’s Back: ‘This Isn’t Because I Think My Era Is Better Than His Era’

Gaspari said that backs in the 1990s had more detail, whereas now, the lower back definition is harder to see.

“Just want[ed] to talk about a controversial topic I posted yesterday — a side by side comparison of Dorian Yates with Hadi Choopan both from the Olympia. You can see Dorian had his Christmas tree shredded and Hadi — it was like his skin was thick in his lower back in comparison to Dorian Yates.

According to Gaspari, Derek and Hadi brought the best packages at 2022 Olympia, but he thought the winner’s back was a little off.

“With their aesthetics and shape, they were able to become one and two in that show [2022 Olympia]. My preference was more for Derek [Lunsford] but it was apples and oranges in comparisons because from the front, Hadi was dense, shredded, thick chest, you know, striations, really great abs, great legs, but for whatever reason, I thought his back was not where it should be.”

“Middle back was thick, but when you look at the lower back, like back in the day, to me, it was off. He still won the show because he was the best bodybuilder at that show,” says Gaspari. “For me, Hadi is a champion. He beat a champion — to me, it’s constructive criticism. It’s not something where I think that my era was better than this era, I think guys today are much bigger.”

Given the mass athletes carry nowadays, Rich said bodybuilders have sacrificed some conditioning.

“I do think there’s something with the diet — they are not as hard. I think one of the reasons why they’re not as hard is because they don’t want to sacrifice the mass. Now, I believe Hadi now represents the Mr. Olympia, so his package is what’s going to be there. Can he make his back harder like his front, I definitely think he can.”

“It was just my constructive criticism. I’m not hating at all. I think these guys really work hard, all the bodybuilders. That’s all I wanted to say,” Rich Gaspari explained.

Former Olympia winner Samir Bannout was the latest to give his thoughts on the surprising conclusion to the 2022 Mr. Olympia show. Much like the end of this year’s contest, Samir said the finals next year at 2023 Olympia will be determined with another showdown between Lunsford and Choopan.

RELATED: Rich Gaspari Favors Chris Bumstead’s Physique Over Men’s Open Look: “You Look At These Guys and Their Physiques Are Unattainable”

There was a huge shake-up in the Men’s Open division after Hadi Choopan became the 17th man to become a Mr. Olympia. Despite the backlash he faced over his post, Rich Gaspari insists that his intention was only to provide constructive criticism