Life and accomplishments of Lee Haney 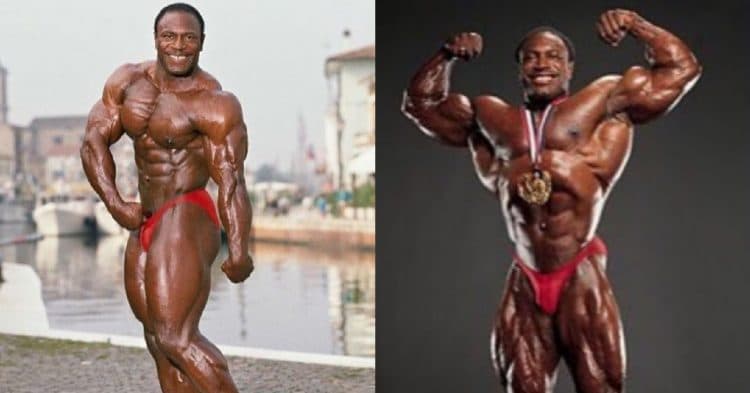 Lee Haney is a retired professional bodybuilder from the United States. He won the prestigious title of Mr. Olympia a record eight times (tied with Ronnie Coleman) from 1984-1991. This is his complete profile, biography, training regimen, diet plan, and more.

Lee Haney was born in Fairburn Georgia but grew up in Spartanburg, South Carolina.

Like so many bodybuilding legends, Haney was fascinated by muscular physiques at a young age, which influenced him to begin lifting weights. He admired the likes of Hercules from Greek mythology, Samson (bible figure), and as he learned more about bodybuilding, “The Black Prince” Robby Robinson was someone he really looked up to.

You could say that Haney had humble beginnings, only having access to plastic, sand-filled weights. But it was something and enough to get him started. He got a weight set at age 12 as a Christmas present and used it for a while to improve his physique.

When Haney eventually joined the local YMCA where he had access to better training equipment, his physique was quickly noticed by bodybuilding coach Danny Rogers, who was extremely impressed with his development.

Rogers told him, “kid you have one of the most balanced physiques I have ever seen. Bodybuilding is your ticket. You can be one of the greatest bodybuilders in the world if you put your mind to it”.

This was he beginning of a new relationship between them of which Haney trained with Rogers for years and developed his physique even further.

Little did either of them know at the time that Lee Haney would go down as an all-time great.

Lee Haney is considered one of the greatest bodybuilders of all time. He is tied with Ronnie Coleman for most Mr. Olympia title wins at eight (both consecutive).

Based on his competitive record, there’s no question that bodybuilding was what he was born to do, having as impressive of a resume that one could possible have.

Haney competed in his first show, the 1975 Mr. South Carolina show, at just 16 years old. He didn’t place but it definitely sparked a further desire to compete.

In 1977, Haney earned a football scholarship to college. And although he was certainly talented at football, he just wasn’t as passionate about it as he was the sport of bodybuilding. So he had to make a choice, and his heart led him down the path of bodybuilding. It definitely turned out to be a good decision on his part.

In 1983, Haney competed at the Olympia and placed third in his first appearance at the prestigious competition. He won the Olympia the following year at just 25 years old, and remained dominant at the show for the next seven years, until he decided that it was time for him to retire at 32 years old.

He also won the 1987 Grand Prix Germany (II) in between his Olympia wins, although this was the only other competition that he participated in during his time as champion.

Lee Haney is incredibly knowledgeable about training and has always shared his best tips and advice for building a great physique. In an interview from 2018, he explained that training routines of bodybuilders back in his day were much different than what they are today.

The guys from his era would train body parts very frequently which he believes is key to really developing that dense muscle maturity.

“One of the things that I see that’s sort of off balance now is that athletes don’t give enough time to bringing about growth and muscle maturity in the different body parts.”

The calves in particular, are one body part that he feels need to be trained heavy and frequently, since they are considered a very stubborn muscle group.

Haney would train 6-7 times per week, and sometimes twice a day. He’d spend 4 hours total in the gym each day.

He had a famous saying when it came to training, “Train to stimulate, not annihilate.”

Haney utilized a lot of the common exercises that are still used today. Although, they didn’t have the same technology that modern gyms have. So, it’s no surprise his training involved a lot of the basics. He was also a big proponent of using pyramid sets which involve starting with a lighter weight, and then increasing the resistance every set thereafter.

This is an example of a leg workout that Haney would do during his competition days.

Squats are unmatched simply due to the overall muscle-building potential that this exercise offers for the entire lower body. It builds the quads, hamstrings, glutes, and calves. Haney believed that using a narrow stance was the most effective way to perform the squat, as he felt it activated the overall thigh muscles better than a wide stance.

Haney utilized the leg press to isolate the thigh muscles. He’d position his feet wide on the platform to really work the inner portion of the thighs.

Leg curls were a staple exercise for Haney when it came to training the hamstrings, which are the muscles located opposite the thighs or quadriceps. Having well-developed hamstrings is just as important as having muscular quads when the goal is to have a complete lower body.

For building the calf muscles, the standing toe/calf raise was his favorite movement.

Haney finished off with the seated calf raise to ensure that he optimally stimulated his lower leg muscles, and he trained calves at least every other day.

His protein sources included mostly chicken, eggs, fish, and sometimes lentils. He wasn’t big on using protein powders although he’d use them during the off-season.

Sweet potatoes were his main carb source which contain lots of fiber and vitamins. He referred to the sweet potato as “the perfect energy food”. He also noted that sweet potatoes have very good anabolic properties which is means that it’s good for supporting muscle-building efforts.

Spinach was also a part of his diet because it’s very rich in minerals are essential for supporting good health. As far as fruits, he’d have pineapple twice a day for the anti-inflammatory properties which helps to support the joints.

Other foods in his diet included almonds, walnuts, and he’d eat as many as 12-15 eggs per day, during his off-season. But close to competition, he’d eat fewer whole eggs.

Haney always focused on good nutrition and never allowed himself to gain more than 20-30 pounds during the off-season. The fact that he could still see his abs was a good indicator that he was at an acceptable body fat.

“If you got abs, then that means your body fat is within control.”

Lee Haney lives in Atlanta, Georgia with wife Shirley, and he has two children.

He has a show on the Trinity Broadcasting Network (TBN), “TotaLee Fit with Lee Haney,” where he teaches physical and spiritual fitness. He’s often joined by guests on the program, as well as being accompanied by his wife.

Lee Haney is a bodybuilding icon who continues to inspire millions around the world, not only because of his legendary achievements, but also due to the fact that he’s known for being an amazing individual. What he was able to achieve throughout his career was more than he could ever hoped for. And his record eight Mr. Olympia titles is true a testament to the hard work, dedication, and passion that he had during his competitive years in the sport of bodybuilding.