Bodybuilding veteran Bannout gave his thoughts on Ramy's fall from grace at 2022 Olympia after finishing fifth. 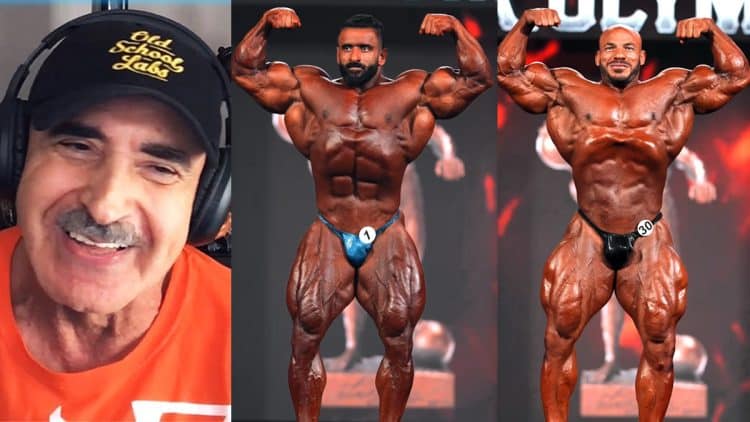 Samir Bannout is one of the latest bodybuilding veterans to discuss the aftermath of the surprising 2022 Mr. Olympia contest. Speaking on the Muscle Maturity Podcast, Bannout shared his opinion on what happened to Mamdouh ‘Big Ramy’ Elssbiay after finishing fifth and whether he could make a successful comeback next year.

“He [Big Ramy] had an airplane; he doesn’t know how to fly it and that’s basically the problem. He crashed. He did,” says Samir Bannout.

Over last weekend, the 2022 Mr. Olympia contest wrapped up in Las Vegas, NV., with Hadi Choopan claiming gold. The event served as a major shake-up for the Men’s Open division, as Elssbiay shockingly surrendered his title after being outmatched by four other competitors.

During the contest, Ramy was brushed to the side of the stage and hardly compared with other athletes throughout prejudging. While he briefly took center stage in the finals, most fans and veterans agreed that Hadi Choopan and Derek Lunsford were fighting for gold. In the end, Choopan ended Ramy’s two-year reign and dedicated his achievement to the women of Iran.

Since the loss, Ramy reaffirmed his commitment to bodybuilding with fans online. He promised he’d never give up and that he would be back. In a long-form interview days after the show, the former champion was optimistic about his future. He said as soon as he speaks with the judges and finds out what wrong, he will begin his road back to the top.

Reflecting on the exciting contest, Samir Bannout talked about Ramy’s physique at 2022 Olympia, what’s next for the former champ, as well as the probability of him returning if he has nerve damage in his back.

Samir Bannout on Big Ramy’s Fall From The Top: ‘His Muscle Atrophy Was Showing

Samir believes Big Ramy was nervous performing at 2022 Mr. Olympia. He agreed with Nick Trigili that the judges could have easily put him in sixth place instead of fifth.

“Too much excitement for him [Big Ramy] — you know he probably doesn’t believe himself, ‘I’m already on the Olympia stage,’ he wasn’t really calm. Nervousness messes you up, you gotta calm down.”

“He could have easily been in sixth place,” Nick Trigili interjected.

Looking back on Ramy’s physique, Bannout said he was ‘missing things’ like his triceps and lats.

“It happened to me but for me it was done intentionally. it wasn’t — I mean, he really went backward. The muscle atrophy was showing. We talked about it so many weeks ago, so it did affect him quite a bit. His quality and skin wasn’t too bad, he still had that quality, but some things are missing — his triceps a little bit, his lats are a little bit caved in, and you could see that.”

While attending the competition, Samir said George Farah told him that something happened to Ramy’s thighs. Months leading up to the contest, divots or dents in Ramy’s quads were noticed by several fans and competitors. Even Iain Valliere suggested that Ramy could be marked down for them. In Bannout’s opinion, that may have happened at 2022 Olympia.

“Something on his size wasn’t — according to George Farah, he said, ‘I don’t know what he had,’ I think George went backstage, I didn’t go backstage for Mr. Olympia, but he told me something happened to his thighs, there was a couple of divots,” Bannout explained. “Big Ramy got heavily affected and that’s what happened”

Bannout: Ramy ‘Should Play It By Ear,’ If It’s Nerve Damage, It’s Done’

Samir Bannout urged Ramy to get his health in order before coming back to the stage next year.

“I think he should have waited [before announcing he’ll come back next year] like you said, wait a day or two, and then talk about it. Ramy should consider his health issue first. Because if he can fix the problem with his nerves, the pressure that he has on his lats and his trapezius, which we talked about earlier, one of his arms from the side, his triceps were gone.”

“Not everyone noticed that, but we do notice these things and it’s really sad. We need to fix him health-wise because the motivation and the passion is there for Ramy. And he’s still at the proper age too, I would just take the next year to be as healthy as possible.”

Similar to a problem Phil Heath had to deal with, Bannout reiterated that nerve issues are tough to fix and come back from.

“I mean it’s a tough situation. Look at Phil Heath, he’s capable of winning the Olympia again but the nerve issue with his abdominal that cost him a lot. Phil Heath couldn’t come back because of that. Nerves are impossible to fix. He [Ramy] should play it by ear. If he’s healthy and fine, he may be able to come back but if it’s severe nerve damage, I think [his career] is done. He’ll never be the same.”

Before ending the conversation, Bannout suggested that next year’s Olympia contest will be another race between Hadi Choopan and 2022 runner-up Derek Lunsford.

“Hadi [Hadi Choopan] is very disciplined. He will try, he will try. I think it might be again — him and Derek this next year [2023]. Unless Andrew Jacked gets healthier and feels better. Andrew was very impressive standing there, but something was missing.”

Ramy’s close friend and training partner Dennis James also briefly discussed the champ’s fall to fifth place. Weeks before the show, he promised Big Ramy would be at his ‘best ever.’ According to James, Ramy was ‘on point’ one week from 2022 Olympia and said he doesn’t know what happened to the former two-time champ.

Some fans have speculated that Ramy could be on his way out of the sport, but the Egyptian native appears motivated to get his title back. If Ramy’s dealing with nerve issues, Bannout seriously doubts his chances of success on stage in 2023.