Bodybuilding veteran Gaspari joins Romano to discuss Bumstead's impact on the sport: 'he's one of the few competitive bodybuilders that has a business and a brand' 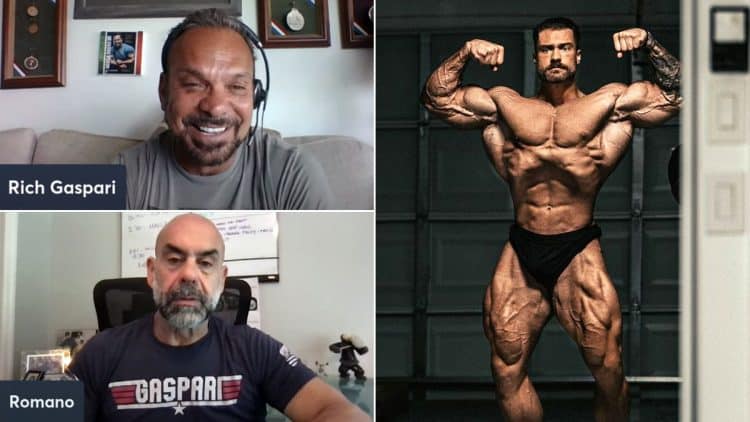 Bodybuilding veteran Rich Gaspari led a tremendous career that saw him reach the Olympia stage a number of times. In a recent video, Gaspari and industry veteran John Romano discussed bodybuilding’s popularity, and how Classic Physique compares with the Open class.

Rich Gaspari dominated in the IFBB Pro League in the late 80s to early 90s with a detailed lower body and sharp conditioning. During Lee Haney‘s furious reign which resulted in an astounding eight Mr. Olympia titles, Rich became a three-time runner up to the bodybuilding legend. While he never touched a Sandow trophy, Gaspari earned the fitness community’s respect with consistency and hard work.

Fitness industry veteran John Romano has a strong voice in the bodybuilding sector after working in the field for several years. He is the co-founder of the popular bodybuilding publication and website RxMuscle. John has been featured on television networks like HBO and ESPN for his knowledge of the sport.

Back in March, a discussion was sparked about the popularity of Classic Physique versus Men’s Open bodybuilding. Classic Physique was the final division featured at the 2022 Boston Pro show.

With stars like three-time Classic Physique Olympia Chris Bumstead and Bostin Pro Classic Physique winner Urs Kalecinski in the mix, many fans are questioning which division is more popular, including Romano and retired pro Rich Gaspari.

“The other guy that had a really high following because he started with social media and then from there actually became a really great Classic bodybuilder is Chris Bumstead. Gaspari explained. “He’s the top one. He won three years in a row. Before he won, he already had an excess of five million followers.”

Before continuing the discussion, Rich clears the air on the difference between being Mr. Olympia (the Men’s Open Olympia champion) as opposed to winning the Classic Physique title at the Mr. Olympia contest.

Rich and John discuss C-Bum’s popularity and praise him for capitalizing on the financial side of the sport. Between streaming platforms like TikTok, Instagram, and YouTube, Bumstead’s followers count is in the tens of millions.

“I think that bodybuilding has gotten to a point… well first of all, Chris Bumstead gets credit that he really grew his popularity. He grew during the time of Instagram when it first started. You can gain followers very quickly.” Rich told John.

“The followers you’re quoting are only Instagram. This does not include Facebook, TikTok, Snapchat, YouTube, so you add all of that. It’s in the tens of millions.” Dava Ramono added.

“He’s got three million followers on TikTok. 9.5 plus three million on TikTok. Then, he’s very popular on YouTube. What he’s done is he’s used the vehicle of YouTube to show his training, his progress, how he eats. That has gone into his Instagram that’s grown tremendously, at 9.5 million. He’s become really really popular.” Rich told John.

Gaspari said he saw first-hand how many fans Bumstead draws. In addition, Gaspari was impressed with Bumstead’s business ventures.

“I’ll give you an example. I was at a show in New York at a store. It had a sidewalk sell that they have every year. One of the famous people or whatever you want to call them, celebrities, with myself Curry was there with his brand. The line of people to see Chris Bumstead was just incredible. He has his own brand. I mean, he’s really smart. He’s one of the few competitive bodybuilders that also has a business and a brand.” Rich told John.

He added that former Mr. Olympia Brandon Curry had to ‘give up on his brand’ earlier this year to focus on bodybuilding.

“We had Brandon Curry on our podcast. Remember he had a brand. He gave up the brand. He said it was too much work for him [while] being competitive and trying to run a brand. says Rich. He went back to Scitec, which is a European brand, he went back to that brand, so now he’s being sponsored by Scitec again. The point that I’m making… who is more popular? Has bodybuilding lost its popularity?

According to Rich, Open class bodybuilders have a physique that is harder to achieve. Typically, it takes years of training to pack on quality muscle. However, he used Nick Walker as an outlier when discussing this point, since “The Mutant” continues to add mass in preparation for 2022 Olympia.

“You look at these guys and their physiques are unattainable. It takes them a lot longer. I can’t say that for Nick Walker. Normal guys that are in the Olympia are in their 30s to 40s. It takes that long to gain all that muscle. Nick Walker is in his 20s and is that big!”  says Rich Gaspari.

Kamal Elgargni came in second place last weekend at the Tampa Pro to Akim Williams. The two bodybuilders presented vastly different packages from each other. Williams presented a monstrous build with an incredibly full upper body. Conversely, Elgargni, a former 212 Olympia champion, appeared undersized but brought some of the best conditioning of any athlete at the show. From Romano’s point of view, the 51-year-old Elgargni won the event handily.

“To contrast that, this weekend in Tampa, this guy Kamal [Elgargni]. He’s 51! The guy unbelievable. He was more shredded than any guy on stage by far. And he’s huge. He’s thick as fu** man. Akim Williams comes on stage… several weeks out his condition was way off. He’s got an amazing structure. He’s huge and they gave him the win. The thing was… all day from how they set up prejudging from standing in the middle. It was evident, clear as day, that Kamal won the show. Pure as day. No question.”

Romano said the head judge revealed the competition was decided by conditioning and size.

The head judge sat down with us and kind of explained it. You got apples and oranges here. You got condition over mass. I think this is where this fits into the popularity. The mass is unattainable for most people. It’s not even comprehend-able to think how you do that.” John Romano told Rich.

He said the judges possibly chose Akim over Kamal because they favor lines and form more in the Classic Physique division.

“You can’t even comprehend a guy like Akim, or Kamal, they are just out there. The point is the judges took the mass over the condition probably because you got that second division that’s Classic Physique that wants to keep the lines and the form.” Romano said.

Romano circled back to the Open versus Classic Physique debate and said mass monsters in the Open are causing bodybuilding’s audience to “shrink”.

“Whereas now, the Olympia or Open Bodybuilding is just a mass freak show. That’s what shrinks the audience. It’s always been like this. Bodybuilding… the difference is bodybuilding used to be in Open Bodybuilding the fans are bodybuilders.” John continued. “C-Bum appeals to everybody, whether you work out or not.”

It appears Romano and Gaspari are acknowledging a shift in the sport, as more people are voicing their appreciation for Classic-looking bodybuilders. Additionally, John believes the fan demographic changed. He asserted that other bodybuilders used to be fans of the sport but that is now changing.

Gaspari and Dave believe social media is reshaping the sport of bodybuilding. Following their in-depth discussion, Rich says bodybuilders like Chris Bumstead have found success because he appeals to everyone.