In preparation for his 2022 competitive strongman season, the 'American Monster' was recently seen pushing the limits dragging a 400-lb sled for a mile. 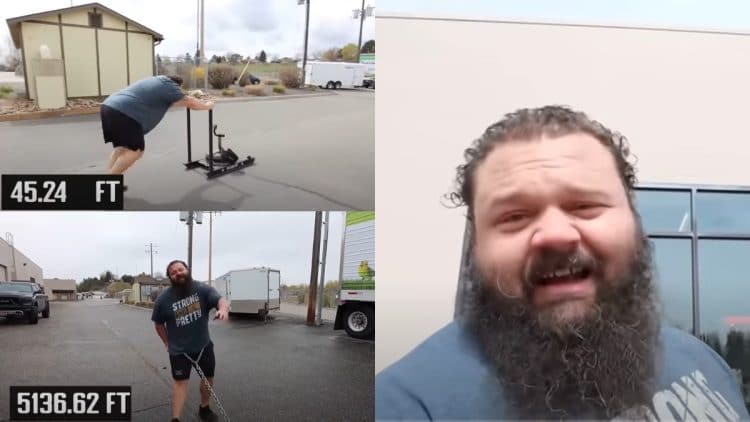 Active in strength sports since 2012, Robert Oberst is one of the most competitive strongman athletes to emerge from North America. In a recent video, Oberst shared a grueling training session in preparation for 2022 Giants Live World’s Strongest Nation contest.

Oberst has struggled to reach the podium at prominent shows but found his groove in 2013. He captured gold at the 2013 Giants Live in Las Vegas and at the Odd Haugen’s US Open MAS Wrestling Championships in the same year. Robert has shown when the going gets tough, he rises to the occasion in and outside of training.

The “American Monster” is looking to make a statement during his upcoming season of strongman in 2022. He is the designated team captain for the USA and will battle against England’s team captain 2017 World’s Strongest Man Eddie Hall at the upcoming Giants Live World’s Strongest Nation competition. Since Hall is coming out of strongman retirement for the contest, excitement for the show continues to build.

Robert endured a severe shoulder injury that sidelined him from competition for a considerable amount of time. He has opted not to compete at the 2022 World’s Strongest Man contest, which will take place May 24-29, 2022, in Sacramento, California. While he’s unable to compete at WSM in just a few weeks, he is currently in prep for his planned return in late November.

In a recent YouTube video on May 7, 2022, Robert showcased an incredible feat of strength after pushing and dragging a 400-lb sled for one mile.

“I’m in prep. I’ve got a big show coming up. November, the day after Thanksgiving, I’m going to compete against Eddie “The Beast” Hall in Liverpool, England, live for everyone to see. “The Beast” is back and the “American Monster” is going to put him in check. So this is just not for fun.

This is not just for you guys to enjoy me dying. Yeah, of course, obviously that’s the best part of the video is watching me suffer, but I’ve got to make sure that I’m ready to show up and kick ass because I’m the “American Monster”. I’ve gotta do it. So, I’m going to push here, push it, and then I will step inside here and I will drag it. I will go 26.4 is 5,280 feet. So I will go 27 trips. You will see every single trip between this post and the post down there that we marked.” Robert Oberst said.

Preparing for his competitive return to strongman, Robert was tasked with an endurance-heavy workout made up of pushing and dragging a 400-lb sled. The strongman star says that he wanted to keep his options open just in case he felt the need to add more weight to the sled.

Robert pushed through 27 lengths of the course he chose for his workout routine. He utilized a sled workout because he could add weight as needed. However, his legs eventually began to feel the pressure of the weighted sled and didn’t need to make the weight any heavier.

“My body is already telling me to stop. My legs are getting wobbly” Robert Oberst shared.

After taking time away from strongman for different reasons, plenty of enthusiasm surrounds Eddie Hall and Rober Oberst as they eye their respective returns to strength sports. Given that Eddie tried his hand at boxing, perhaps the 2017 WSM will come into Giants Live with renewed cardio and endurance.

Despite bad weather getting in the way of the exercise, that didn’t stop Robert’s preparation for Giants Live World’s Strongest Nation. Upon completion of the exercise, Oberst traveled with the sled totaling 5,889.23 ft, which ended up being over 600 ft more than a mile.