8x Mr. Olympia says 'Size and Shape' are the only ways to stop Big Ramy from winning another title. 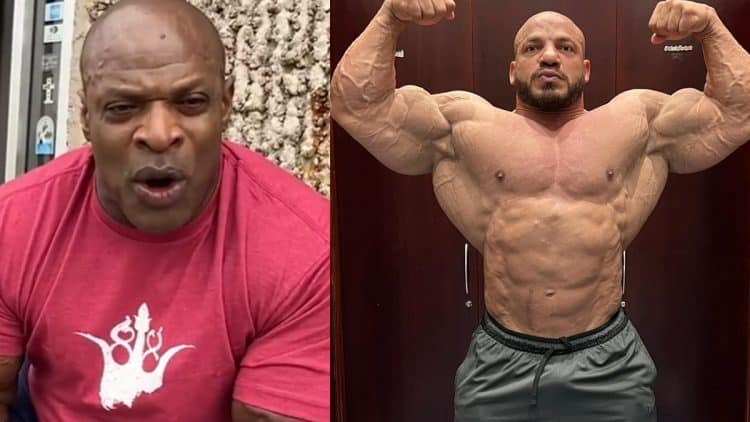 Bodybuilding legend Ronnie Coleman may have stepped away from competing, but his knowledge surrounding the sport hasn’t gone anywhere. In a recent video, Coleman gave his thoughts on two-time Mr. Olympia Big Ramy’s reign and discussed if anyone could take his title later this year.

“Right now, he’s got size on just about everybody. Ain’t nobody going to be able to outsize him right now. It’s going to take somebody with a lot of conditioning and a lot of shape to beat him,” Ronnie Coleman said.

As a dominant mass-monster himself, Coleman understands the power of conditioning, but especially size. He captured the Mr. Olympia title a total of eight times during his tenure. While he was eventually dethroned by four-time Olympia winner Jay Cutler, Coleman cemented his name in the sport with intense training and an imposing physique.

The sport has witnessed a number of bodybuilders rise this year, like Andrew Jacked. Andrew recently won the 2022 Arnold UK contest, which served as his second Pro victory this year. Despite new talent emerging in the Men’s Open division, Coleman doesn’t see much changing at 2022 Mr. Olympia.

Just a few weeks ago, Coleman took his prediction further. Given Big Ramy’s quality muscle and size, Coleman said that he will likely retain his title for the “next three or four years.” Coleman substantiated this claim by sharing that no one else in the Men’s Open division can catch up to the reigning champion’s remarkable size. In one of his latest podcast appearances, the bodybuilding legend gave a look at some of Ramy’s top threats.

Ronnie Coleman Highly Confident in Big Ramy Ahead of 2022 Olympia: ‘Nobody Getting That Big In This Short Amount of Time’

In a recent video with Muscular Development Magazine, Coleman expressed doubt when discussing who could possibly defeat Big Ramy at 2022 Mr. Olympia.

When comparing his past packages to Big Ramy, Coleman believes he had him beat everywhere. He added that Ramy’s legs are “overpowering” and that he would benefit from bringing more conditioning to his whole body.

“What would I have that’s not beating him?” says Coleman. “His legs are just overpowering everything right now. If he could just bring up his whole body just a little bit more, I think he’d be spot on. You gotta get a little bit drier too at the same time, that’s going to be kind of hard to do.

Right now, he’s got size on just about everybody. Ain’t nobody going to be able to outsize him right now. It’s going to take somebody with a lot of conditioning and a lot of shape to beat him.”

According to Coleman, Andrew Jacked needs to work on ‘everything,’ but especially the thickness of his back.

“No. No. No [he’s not going to push Ramy this year]. Not yet,” said Coleman. “He needs to work on everything just about right now. He’s got a real thick chest and that’s good for him. He needs to get his back a lot thicker — his legs need to be a little bit thicker also. He got young muscle. He don’t have a lot of maturity to his body yet. His muscle is real young looking.”

Ronnie says that Andrew Jacked’s height is working against him.

“He needs to get a little bit more crispier, little bit more conditioning in his body along with thickness. There’s not a lot of thickness there. You lose the illusion of being big and hard when you don’t have that thickness right, you know. That’s the only thing he’s missing. That’s going to come with time.”

When looking at the history of Mr. Olympia shows, Coleman believes that taller bodybuilders are at a disadvantage because it’s harder to put muscle on a longer frame.

“His [height] is working against him right now. It’s going to always be that way. It’s much much harder to put muscle on a longer frame than it is the shorter one. That’s been proven over the years. You look at all the Mr. Olympias, the only tall one I delt with was Arnold and that was way back when. That’s a totally different era in itself. They didn’t have guys that knew what we know now.”

Coleman said Walker was a wild card for 2022 Mr. Olympia a few weeks ago. And while there’s a chance, he not convinced Walker will pose a serious threat to Ramy’s title this winter.

“No. No. No. He’s a young guy too. He’s got a ways to go too before he comes against Ramy. He’s big, like you say, but big ain’t all what bodybuilding is all about. The same with conditioning too.”

Ronnie Coleman isn’t the only high-profile bodybuilder who is confident in Big Ramy’s abilities. Coleman’s successor, Jay Cutler believes Ramy will win 2022 Mr. Olympia handily. Cutler acknowledges that rookies like Andrew Jacked have the potential to become Mr. Olympia but said he won’t have the tools to topple Big Ramy this year.

Despite a busy field of competitors, Coleman isn’t ready to count out Big Ramy at this year’s Olympia contest. It would take size/conditioning to defeat him, and Coleman doesn’t believe anyone can make up that much ground in such a short period of time.