The four-time Mr. Olympia shared that if Andrew Jacked "actually gets in shape" no one stands in his way except the reigning champion Big Ramy. 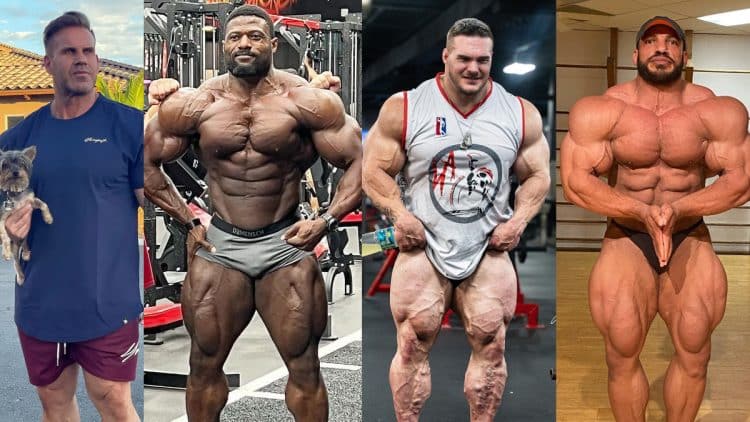 Jay Cutler in Jacked vs Walker And Ramy (via Instagram)

Bodybuilding legend Jay Cutler is giving his thoughts on Andrew Jacked after watching the rookie deliver his third-straight victory at a bodybuilding show this year. In a recent video, Cutler sat down with Milos Sarcev to assess Jacked’s physique from the 2022 Arnold UK and gave his thoughts on a match-up against Nick Walker.

Andrew Jacked’s 2022 season of bodybuilding will likely stand beside Nick Walker’s as one of the most impressive. In March, he earned his Pro card at the Arnold Classic Amateur show. Coached by bodybuilding legend Flex Wheeler, Andrew won his Pro debut with a first-place finish at the 2022 Texas Pro, where he defeated third-place finisher Steve Kuclo, and runner-up Martin Fitzwater.

His dominant victory in Texas prompted the bodybuilding community to discuss his potential in the sport. Milos Sarcev has already said that Andrew is an ‘immediate’ contender for the 2022 Mr. Olympia title. In fact, Sarcev was so impressed, he stated ‘nothing’ was missing from Andrew’s physique. Cutler, however, took his prediction one step further and labeled Jacked as a future Mr. Olympia winner.

Despite earning his Olympia qualification, Jacked opted to compete at the recent 2022 Arnold Classic UK contest. While he won the show, the victory left Cutler and Sarcev with more questions than answers.

During a recent video, Sarcev said Andrew Jacked’s performance at the 2022 Arnold UK contest left him with ‘question marks’ about his conditioning.

“We were expecting Andrew Jacked to just dominate because we agree, he’s spectacular, he has the shape, no one can touch him. He was 100 percent here, and only 70 percent in Texas. So our expectations were, ‘okay, we’re going to see an alien coming to the earth.’ Then, he showed up — still won hands down in my opinion. But conditioning left some question marks,” said Milos Sarcev.

Cutler expected more from Jacked in Birmingham considering all of the high expectations.

“I was expecting more. If that makes sense. In no way is this to discredit what he’s achieved or how he looks because I’ll say it right out, this guy, if he actually gets in the shape that expectations are… I think he can beat everyone but Ramy. Because of his structure, listen: the way he stands in a relaxed shot – his front lat spread – I mean the front double, like he’s got everything” Jay Cutler said.

He believes Andrew could lose some of the details to his physique if he has to bring up his back too much.

“The pecs are so full. The midsection is detailed. You can see everything,” says Cutler. “The problem is if he sacrifices to get that backside in. Will it take away from what he has…” Cutler wondered.

Sarcev shared that he saw Jacked at the Dragon’s Lair months ago and that he looked much better than he did at the Arnold UK.

“I saw him [Andrew Jacked] with Steve Weinberger at Dragon’s Lair, and that day — he looked considerably better than here [2022 Arnold UK]. I promise you. Bigger, fuller, striated, everything, and conditioning wise — I think he was better in the gym,” Milos Sarcev said.

According to Sarcev, Andrew Jacked’s conditioning could hold him back at 2022 Mr. Olympia and he used Nick Walker to illustrate his point.

“Andrew has one of the craziest chests I’ve ever seen, but he’s gonna have a problem [with] conditioning because he doesn’t have the details. Even Ramy has it to a certain degree now, so who is he going to stand next to that has all that Nick [Walker]? says Sarcev.

Cutler disagreed with Sarcev and said that Andrew’s shape is overwhelming, especially from the front.

“Andrew was not as good as Texas, but he still showed up and won the show. His back is still a little bit too weak, but he can still make a top six at Olympia. He disagreed, saying that his shape is overwhelming and that he will look good even from the front, next to Hadi [Choopan] and Nick Walker, who are ridiculously peeled. He also said that he doesn’t see himself losing to them at Olympia,” says Cutler.

The four-time Mr. Olympia added that Nick Walker’s back double biceps pose will present challenges for Jacked, as he sees “The Mutant” securing a top three finish at 2022 Olympia. He mentioned that Brandon Curry will give Jacked a hard time as well.

“Nick Walker’s back double is insane, and he’s going to place somewhere in the top three. I still think Brandon brings it, Ramy brings it, and Hadi brings it, so I think exactly yeah. I can’t discredit Brandon because I think he’ll [Andrew] have a hard time with Brandon, but I don’t think I will give up on Brandon yet. I would like to see Brandon and Andrew next to each other,” Cutler said.

Jacked’s potential was discussed by Walker last month. He said that Jacked has the tools to defeat surging Men’s Open competitor Blessing Awodibu. Similar to Andrew, Awodibu also won two Pro shows this year. When asked about the future match-up, Walker made it clear that Jacked has ‘better shape, legs, and more conditioning.’

Cutler and Sarcev both see a bright future for Andrew Jacked at 2022 Mr. Olympia. Should Jacked ‘get in shape’ as suggested by Cutler, the bodybuilding legend sees him beating everyone except reigning Mr. Olympia Big Ramy this December.