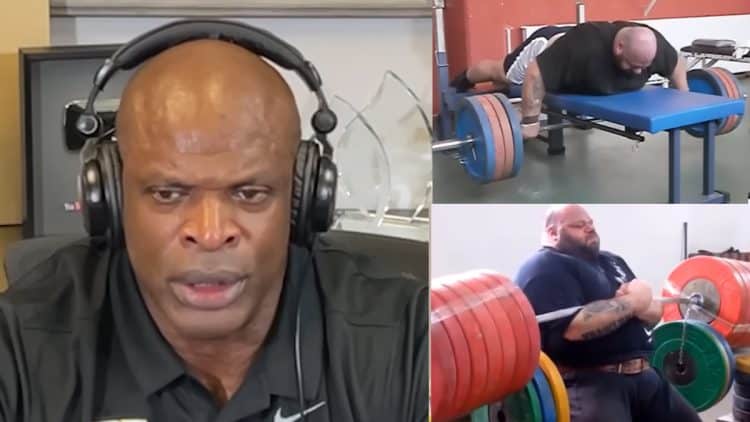 When it comes to bodybuilding and workouts, Ronnie Coleman obviously knows what works and what doesn’t. The eight-time Mr. Olympia winner is regarded as one of the greatest bodybuilders of all time. His contribution to the sport of bodybuilding is so massive that a Mount Rushmore of bodybuilding can never be complete without including Ronnie Coleman’s face.

The 58-year-old retired bodybuilder won the Mr. Olympia title eight consecutive times from 1998 to 2005. His rivalry with Jay Cutler is regarded as one of the fiercest competitive rivalries in the history of the sport. After getting dethroned by Cutler at the 2006 Olympia, Coleman completed one more time and called it a career after a fourth-place finish at the 2007 Olympia. The bodybuilding community honored him with the Arnold Classic lifetime achievement award in 2021.

15 years after his retirement, Ronnie continues to be an influential figure and a prominent voice in the bodybuilding industry. He routinely shares entertaining content on his YouTube channel. At the time of this article’s publication, his channel has over 1.47 million subscribers.

Recently, Coleman posted a video on his YouTube channel in which he reacted to internet sensation Kyriakos Grizzly‘s lifts.

Grizzly is a social media figure who has garnered a lot of attention due to his heavy but shabby lifts. As per the information available online, Kyriakos Kapakoulak, popularly known as Kyriakos Grizzly, is of Greek and Russian descent and most of his videos are cell phone recordings of the actual workouts he has been doing for over a decade.

The first clip of the compilation showed Grizzly lifting a barbell loaded with an extraordinary number of plates with reckless abandon. Grizzly dropped the weight and started beating his chest in triumph with a loud roar. This visual had Coleman totally confused as he reacted:

“I’m trying to figure out what the hell he’s doing. I ain’t never seen no sh** like that before, I think he lost his mind like you’re having a seizure… Yeah he is having a seizure,” a shocked Coleman said.

“What the hell! Oh yeah, yeah he’s having a seizure. He has completely lost his damn mind. He’s just screaming and doing the weird a** s***!”

As Grizzly feverishly slammed the medicine ball into the floor in this next lift, Ronnie reacted:

“Here we go. I think he’s trying to do a pull-up But is just doing an up,” An amazed Ronnie Coleman said when Grizzly was seen doing pull-ups.

As we watched the video, we were wondering if Grizzly was trying to perform the seal row. However, Coleman reacted to the lift, as if to answer our question and said:

When Grizzly next appeared on the screen trying to pull off some explosive reps of what seemed like barbell upright rows of sorts, Ronnie’s amazement had crossed all limits.

“What the hell is he working on? What is that now? This is just absolutely the most crazy thing I can think of to do at the gym. That is not a workout…”

“This is the guy who goes to the gym and says I lift heavy shit. That’s all he is doing, just lifting some heavy sh**. He’s not working out…” Ronnie Coleman said.

Ronnie turned towards his team behind the camera and concluded:

“That’s got to be the craziest sh** I have ever seen in my life. Where did you all find that?”

You can watch the full reaction video below, courtesy of Ronnie Coleman’s YouTube channel: