No Result
View All Result
Profiles
Fact Checked
Fact Checked
This article was written by one of our qualified writers, and fact-checked by our experts. The numbers in parentheses (e.g. 1, 2, 3, etc.) throughout the article, are reference links to peer-reviewed studies.
Our team of experts include a board-certified physician, nutritionists, dietitians, certified personal trainers, strength training experts, and exercise specialists.
Read Our Editorial Process

Life and accomplishments of Sadik Hadzovic. 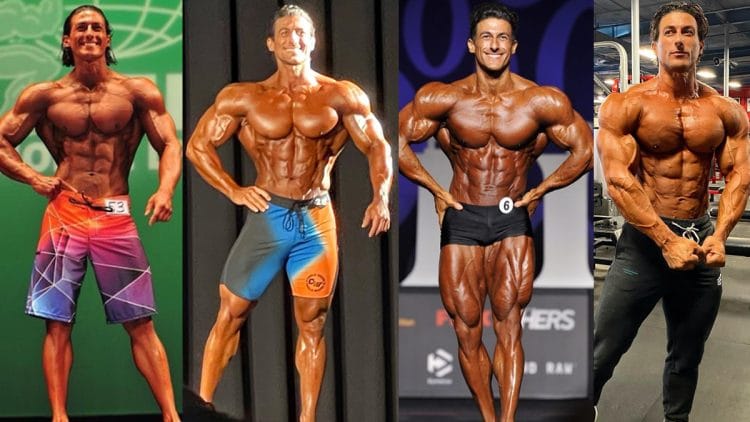 Sadik Hadzovic is an IFBB Pro League Men’s Physique bodybuilder. He is one of the most prominent athletes in the division and won the inaugural Men’s Physique contest at the 2015 Arnold Classic — considered the second biggest bodybuilding show after the prestigious Mr. Olympia. This is his complete profile, biography, and more.

Sadik Hadzovic was born in war-torn Bosnia & Herzegovina. After much struggle, his family immigrated to America as refugees to find a better life, settling in New York.

Hadzovic was a comics fan growing up and wanted to build a physique like his favorite superheroes. The Physique admittedly grew up in a no-nonsense household and was taught the importance of hard work and dedication from a young age.

“I always have been fascinated by the physiques in comic books and action figures that I played with as a child. Since a young age, I knew how I wanted to look like, and I wanted to resemble those action figures, comic book characters, and superheroes.”

Per Sadik, growing up, he always envisioned himself with a well-built, superhero-like body and started lifting weights when he got fed up with his 140-pound structure.

He started working out in his teens by doing plyometric exercises in his bedroom. Hadzovic bought himself a bench press and weight set with his first paycheck. However, it wasn’t long before he outgrew his home gym setup and had to join a local gym to take his training to the next level.

Although Hadzovic noticed almost instantaneous results after joining a commercial gym, his progress stalled a few months into training. After analyzing each part of his regimen, Sadik concluded that his unbalanced diet was the reason behind him hitting a plateau.

The Physique invested time in learning about nutrition and designed a macro-focused diet program that included eating small meals at regular intervals, ensuring his muscles received a constant supply of nutrients throughout the day.

Related: 5 Superhero Workout and Diet Programs: From Hulk to Ant-Man

Hadzovic built a head-turning physique by 24 and decided to test himself by competing in bodybuilding shows and turning pro. He entered his first competition in the Men’s Physique division at the NPC Eastern USA Championship in 2011, where he finished third.

The NPC Eastern USA show proved to be a turning point in his career as he came out with a valuable experience and met many like-minded athletes, solidifying his desire to become a top-level pro bodybuilder.

It would be safe to say that Hadzovic was bit by the competitive bodybuilding bug after his first show. He diverted all his focus on improving his physique and started training seven days a week.

Sadik earned the moniker The Physique for his broad shoulders and tight waist, reminiscing bodybuilding fans of the golden era physiques with his classic X frame.

Hadzovic next competed in 2012 and earned his IFBB Pro card by winning the 2012 NPC Junior National Championships at 25 years old. Notably, he stepped on stage eight times in 2012.

Sadik Hadzovic took no time off after turning pro and carried his momentum into the big league. He made a mark in the pro bodybuilding circuit by securing a second-place finish in his first pro show — the 2012 IFBB Greater Gulf States Pro.

In 2013, Hadzovic competed in four shows in the Men’s Physique division. Furthermore, in 2013, he qualified for his maiden Mr. Olympia showdown by winning the 2013 New York Pro show. The Men’s Physique competitor took a respectable fourth-place finish in his freshman year at bodybuilding’s biggest stage.

In 2014, Hadzovic lost his NY throne but qualified for the Olympia by winning the Tampa Pro. He improved his Olympia ranking by two places in his sophomore year.

The Physique’s biggest pro career win came at the 2015 Arnold Classic, which also happened to be the inaugural Men’s Physique contest at the contest. Hadzovic finished runner-up for the second time in a row at the 2015 Olympia weekend behind Jeremy Buendia.

2016 was an interesting year for the competitive bodybuilding circuit as IFBB Pro League announced the introduction of the Classic Physique division.

Hadzovic left the Men’s Physique division for Classic Physique in 2016. He competed in one show in 2016 — the Olympia, taking home a third-place finish.

The Physique next competed at the 2017 Olympia in the Classic Physique division but fell to the seventh spot that year. He took the next year off to work on his physique. Hadzovic later surprised his fans by announcing his decision to switch back to the Men’s Physique division.

He was next seen on stage at the 2019 Arnold Sports Festival in the Men’s Physique division, where he got sixth place.

After a humbling sixth-place finish at the 2019 ASF, Hadzovic took a hiatus from competitive bodybuilding. He made a comeback after three years at the 2022 Pittsburgh Pro and surprised bodybuilding fans by winning the show in the Men’s Physique division and earning his 2022 Olympia qualification. His last show was the 2022 New York Pro, where he secured a third-place finish.

The Physique likes to train hard and heavy. His workouts are long and intense and include a decent amount of volume. Per the bodybuilder, heavy weights mixed with high reps get him the best results as he believes it helps him pack dense muscle on his lean frame.

“My greatest weakness is not being able to take a day off. I love the gym too much. I am in the gym a minimum of 365 days a year. Not even injuries can keep me from exercising and weight training.”

Below is Hadzovic’s training regimen:

Sadik Hadzovic follows a paleo diet throughout the year. Whey protein is the only dairy product in his diet. Furthermore, The Physique eats around 2,500 to 2,750 calories per day to maintain his physique at a ratio of 2:1 protein to carbs.

The bodybuilder limits his carb intake and focuses on meeting his daily calorie goal through protein and fats. Although Hadzovic trains seven days a week, he allows himself a cheat meal every week where he eats anything he is craving.

“I follow a high protein and high-fat diet. I noticed my body responds best this way. I also like putting a majority of my carbohydrates in the first three meals (before my weight training session). After training, I remove a majority of my carbs and increase the fats.”

Given below are Hadzovic’s cutting and bulking diet programs, which he switches between depending on the time of the year:

The Physique uses the following supplements to stay in shape and improve his overall health:

How tall is Sadik Hadzovic?

The Physique is five-foot-eleven and is one of the taller Men’s Physique competitors.

No. Hadzovic has never won a Men’s Physique Olympia title. However, he has placed runner-up twice behind Jeremy Buendia in 2014 and 2015. The Physique’s biggest career win was the inaugural Men’s Physique contest at the 2015 Arnold Sports Festival.

Sadik Hadzovic is one of the most admired bodybuilders in the pro circuit, and his giant social media following is its testament. The Physique ended his five-year-long dry spell by winning the 2022 Pittsburgh Pro.

Hadzovic is expected to step on stage next at the 2022 Olympia showdown, scheduled between Dec. 15-18, 2022, in Las Vegas, NV. Since he has momentum behind him, fans will be expecting big things from him at the show.