Samantha Eugenie scored a new PR with five weeks left until her next competition. 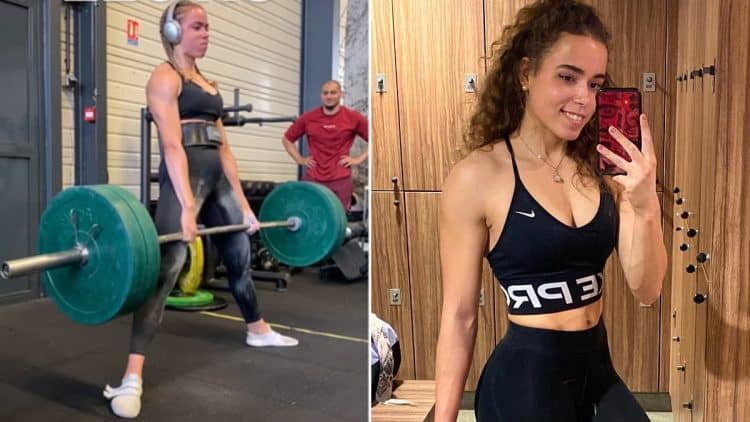 Powerlifting seems to be the biggest thing in France, as they have the most elite women’s lifters. There are obviously some big names like Tiffany Chapon and Lya Bavoil, but Samantha Eugenie, a 20-year-old lifter, is quickly rising up the ranks. Fans have already admired her feats of strength, but she has now reached a new level of excellence. On July 28, 2022, Samantha shared a brand new deadlift PR of 220 kilograms (485 pounds).

However, Samantha Eugenie stated that her current bodyweight is 64.5 kilograms (142.2 pounds), which places her in the 69-kilogram weight class. That does not pose a problem for Samantha, as her 220-kilogram (485-pound) deadlift is heavier than the Junior IPF World Record in that weight class as well. Peyraud Clara holds this record, having deadlifted 215 kilograms (474 pounds) at the 2022 IPF World Classic Powerlifting Championships.

Samantha Eugenie only used a lifting belt for this life, which means that it is raw. She also utilizes a sumo stance alongside a mixed grip.

Samantha Eugenie will have the opportunity to make the record official very soon, since she plans to compete at the 2022 World Classic & Equipped Sub-Junior & Junior Powerlifting Championships. She has five more weeks to prepare, as this contest will take place from August 27 – September 04, 2022, in Istanbul, Turkey.

Samantha Eugenie has taken part in nine sanctioned powerlifting competitions during her 4-year-long career. She won seven of them and only missed out on the gold medal twice.

Samantha Eugenie scored all of her competition PRs at the 2022 FFForce Championnats de France Jeunes de Force Athlétique. That has obviously been her greatest performance yet, but more importantly, she scored four French National Records in that contest.

Samantha is so dominant currently that she could still break world records if she moved up a weight class. However, she will probably continue competing in the 63-kilogram weight class and break the deadlift record with ease. Depending on the strength of her squat and bench, Samantha could also break the Junior IPF Total World Record.