Given the recent hype behind Michal Krizo, Priest discussed his chances against Nick "The Mutant" Walker. 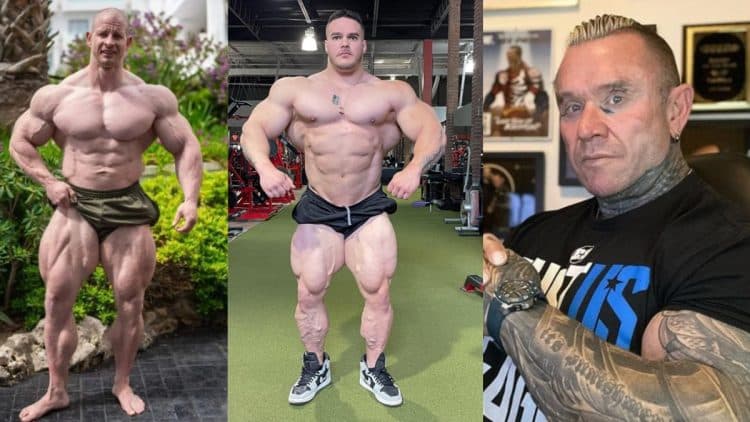 Lee Priest is widely respected in the bodybuilding community given his lengthy career and unique opinions surrounding the sport. In an interview with Rx Muscle’s Dave Palumbo, Priest gave his thoughts on rising Open class competitor Michal Krizo and how he would fare against Nick Walker.

Krizo is a Slovakian-born bodybuilder who quickly made an impression during his time competing in the IFBB Elite Pro League. The Men’s Open mass monster won the 2021 Arnold Classic Europe Elite Pro title with impressive proportions and incredibly detailed arms. His biceps arguably rival some of the best in the IFBB Pro League. Last year, he proceeded to win another show when he brought his talents to the 2021 Mr. Universe Pro contest.

On July 15, 2022, Krizo announced that he would be switching from the IFBB Elite Pro League to the NPC and added that his plan is to secure a Pro card, win an IFBB Pro League show, and punch his ticket to compete at 2022 Olympia later this year.

Since traveling to North America, Krizo has visited bodybuilding’s east coast mecca, the Bev Francis Powerhouse Gym, located in Syosset, New York. The up and comer made the most of his time and also connected with one of the sport’s most respected coaches Milos Sarcev, at Flex Lewis’ Dragon’s Lair gym.

With more and more people getting a chance to look at Krizo’s physique, Lee Preist recently discussed his chances against 2021 Arnold Classic champion Nick Walker.

Before discussing Krizo versus Nick Walker, Priest gave his thoughts on the shape of the newly signed NPC athlete.

“I saw Flex Lewis did a video too, and Milos and everyone is saying that the videos and the photos don’t do him justice to in person and they’re saying that’s not like contest shape. I’m thinking the conditioning on him now, if that’s a somewhat off-season type thing…” Lee Priest told Dave Palumbo.

Priest said that Krizo would ‘probably’ qualify for Olympia because there won’t be many high-caliber professionals competing at the 2022 Prague Pro, an event that Krizo has targeted for late October, though, technically, he would need to earn a pro card before competing at this show.

“He probably would [qualify for Olympia] because how many of the big pros are probably going to Prague? He’d probably be the number one.” Priest said.

According to Lee Priest, any bodybuilder can look great standing by themselves. The true test is a comparison shot next to another pro. He added that Krizo’s ‘paper-thin’ pale skin reminded him of bodybuilding veterans Andreas Münzer and Mike Matarazzo.

“Yeah. Like you said, it’s hard to say. Going by pictures, it’s like shit, I just sent Sid some pictures of me in the Species t-shirt, and I look pretty good standing by myself.”

“His skin fit, the way he’s pale and the conditioning, he reminds me a little bit of [Andreas] Münzer type conditioning and the paper-thin skin. Priest explained. “It’s almost like a combination of [Mike] Matarazzo, [Paul] Demayo and all these people put together.”

Lee Priest believes Krizo could crack the top ten at Olympia on his first attempt.

“It’s going to be interesting to see him getting on stage with the other guys. I think, go on by now, I think he will get top ten for sure but from there on, I don’t know. Priest continued. “He’s so pale too… he needs a good tan that’s for sure.”

While Priest said he needed a side-by-side shot to be certain, he ultimately prefers Nick’s physique despite the ‘freaky’ look of Krizo.

“I think it’s been a year or two since the talk has been going. If he was in the IFBB who would he take out, how would he do, so… he’s going to get his chance. Priest said. “Until I do a side-by-side it’s going to be interesting. I think I prefer Nick’s physique, this guy is freaky but I think, I know I’m just so used to seeing Nick and that sorta of thing.”

Priest isn’t the only credentialed bodybuilder comparing Krizo’s physique to Walker’s. 1983 Mr. Olympia Samir Bannout said that he doesn’t ‘see any weaknesses’ on Krizo‘s physique. Moreover, he added that the Slovakian native’s arms are bigger than Walker’s, which happen to be one of the 27-year-old’s strongest weapons as a competitor.

In addition to Bannout, four-time Mr. Olympia Jay Cutler gave an assessment of Michal Krizo’s overall package. After getting a first look, Cutler was impressed with his round and detailed proportions as well as the striations in his shoulders. Cutler believes when Krizo starts competing against other IFBB Pro bodybuilders, ‘he going to upset a lot of people.’

Krizo and Walker have some history. Last year, following Walker’s victory at the 2021 Arnold Classic, Krzio fired a few shots at the champion. He said the New Jersey native lacked symmetry to his physique before stressing that size isn’t everything during a contest. In the end, Krizo took back the statements he made about Walker.

For Priest to give his most accurate opinion of Krizo, he will need to see him in person but stressed that everyone he’s talked to so far said pictures don’t do the Slovakian bodybuilder justice. Krizo’s jarring size and detailed muscle mass have attracted attention and hype, but Lee Priest favors the look of Nick Walker.